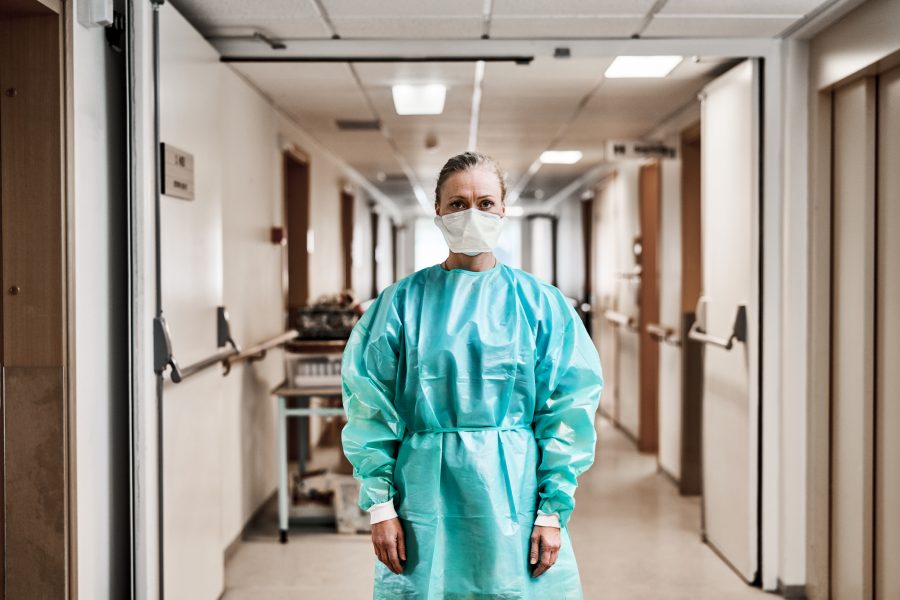 Nurses were clapped and called ‘heroes’ during Covid, only to be slapped with a real-terms pay cut by the government. Now they are fighting back – and many are prepared to take to the picket lines.

In the context of inflation, a decade of austerity-inflicted pay stagnation, and a nursing sector on the brink, the NHS pay offer is seen by many as a bad joke. (Stígur Már Karlsson / Heimsmyndir / Getty Images)

Last Tuesday the government ended its consultation with independent review bodies over NHS staff pay, accepting in full its range of recommendations for workers across the sector. The increases were meagre, representing a real terms pay cut for workers, with the highest of 9.4 percent for the lowest paid porters and healthcare assistants still below a runaway inflationary spiral that could reach twelve percent by the autumn.

Higher paid staff such as dentists and doctors will receive 4.5 percent, while nurses’ average basic pay is set to go up by £1,400, equal to an uplift of four percent, or 5.5 for the newly qualified. In a context not only of inflation, but of more than a decade of austerity-inflicted pay stagnation and a nursing sector in which labour shortages and burnout are leaving services on the brink, this offer is being seen by many as a bad joke.

As in other sectors, trade unions are taking the fight to the government. Back in March, as inflation started to bite, the RCN, Unison, and eleven other unions representing healthcare workers co-ordinated a response to stagnating pay to formulate a collective demand: a joint statement to the NHS Pay Review Body (PRB) called for an ‘inflation-busting’ pay rise that absorbs the effects of higher pension contributions, and a comprehensive retention package to ‘help tackle the workforce crises blazing across the service’.

The RCN then called for a pay rise of five percent above inflation specifically, with Chief Executive and General Secretary Pat Cullen stating that summer must bring ‘a pay award that turns the tide on the years of unfilled nursing jobs and experienced professionals struggling to make ends meet.’ The RCN held an emergency meeting of its council in July and voted to ballot members in England on industrial action. Unison is also consulting NHS members, recommending they reject the pay deal ‘with industrial action’.

Emily*, a staff nurse, told Tribune that levels of pay have been unacceptable across the sector for years, and that ward-specific contexts often cause underpayment. ‘If you take into account the fact that I leave most shifts late, and I often don’t get a full hour’s break, then my hourly rate will actually be a lot worse than it already is,’ she said. Another staff nurse, Violet*, also argued that pay fails to reflect the stress and pressure nurses feel. ‘The government don’t understand what we do on a daily basis; if one of them were to come and see what a nurse does in a day, I think they’d be shocked. We’re the first on the scene in an emergency, and we have huge responsibility on us from a very early point in our career—in our early twenties we’re asked to take charge of a ward of ten or twenty sick children.’

The government has justified the pay cuts with economic logic designed to legitimise lumping the blame for inflation onto workers. New Health and Social Care Secretary Steve Barclay argued that ‘Very high inflation-driven settlements would have a worse impact on pay packets in the long run,’ in a statemen that also said that the government was taking care ‘not to drive even higher prices in the future’ through pay rises. Notwithstanding the moral case for higher pay in a depleted sector whose wages are growing at a fraction of that of its private counterpart, the metrics by which decisions are being justified simply don’t hold up to economic scrutiny.

RMT General Secretary Mick Lynch made the alternative socioeconomic case in a recent interview with LBC, arguing against the idea that higher wage rises would cause a ‘wage-price spiral’ and instead pointing out that low wages are chasing spiralling profits, rents, and costs. When disparities in wealth and capital ownership are accelerating, when we have more billionaires than the country’s ever had, and when big gas and oil companies are raking in record profits, workers and their unions simply aren’t buying government lines.

Unlike the unions, however, the Labour Party finds itself tied in political knots over industrial action in the NHS and elsewhere, with Shadow Health Secretary Wes Streeting repeatedly cowing to right-wing arguments on staffing, pay, and waiting lists. Speaking to the Institute of Government think tank back in June, Streeting backed sending NHS patients to private health providers as a short-term measure to ease the six-million person long waiting list for treatment. Despite the spiralling crises in the NHS caused by persistent underfunding and a government desperate to force the population into private alternatives, Streeting has doubled down on his position, arguing in an LBC phone-in more recently that he ‘stands for’ a publicly funded NHS, but that as health secretary he would use NHS budgets to pay for patients to have private care. In discussions on pay, Streeting has been conspicuous in his absence.

Streeting’s position is naïve in its assumption that private provision can ever be used as a short-term stopgap to stave off waiting lists. A report by the IPPR think tank earlier this year showed that the expansion of private interests in the NHS is creating a ‘two-tier’ health system divided between those who can afford to pay and those who can’t, with expenditure on private healthcare quadrupling since 1980. In such a system, entrenched market players become difficult to push out, unwilling as they are to give up their market share, and crises of pay, working conditions, and staffing only deepen as more money is diverted away from NHS budgets to shore up profits, as seen with outsourcing elsewhere in the Service. Recent history tells us that Labour can and should tell a different story about the NHS and its future—specifically the commitment in the 2019 manifesto to year-on-year above-inflation pay rises for NHS workers.

Today, both parties fail to challenge the contempt with which nurses have been treated. As a result, the workers I spoke to will be voting for a full strike in the upcoming ballot. ‘We deserve to be listened to and paid properly for our work,’ says Emily. ‘Everyone claims to love nurses, but nobody seems to care about our working conditions or staffing levels. The better staffed a ward is, the better outcomes for all our patients, and better pay will keep nurses in the profession.’

However, turnout needs to increase dramatically from the twenty-three percent who voted in last November’s indicative RCN ballot on industrial action up to at least the fifty percent threshold for the ballot to succeed. Violet, for one, says that since last year’s result her feelings about action have shifted. ‘At the last ballot, I voted for action short of a strike,’ she explains. ‘However, I’ve realised that we are not being taken seriously and we need to make more of a stand if we want to see results and be respected as skilled professionals, and in the next ballot I will be voting for a full strike. Saying that we will just take our full breaks or not do overtime isn’t enough.’

These changes represent the beginning of a long and protracted process that will inevitably see hardworking nurses pitted against antagonistic elements in the government, the opposition, and the billionaire press. Monday’s depressing debate between prospective prime ministers Rishi Sunak and Liz Truss exemplified the hostility key workers face, with both unhesitatingly committed to an outright ‘ban’ on strikes in essential public services if elected.

But hope is a powerful and resonant thing, and the changing atmosphere around the cost of living crisis more broadly makes this feel like the first time in an age of Conservative hegemony in which nurses in a deliberately crippled NHS are having their interests properly championed, alongside those of other workers. The pandemic and its aftermath has proved how far the government assumes it can take key workers—both their labour and their lives—for granted. Now, those workers seem increasingly ready to fight for something better.