Home / News / How those in power try to break strikes 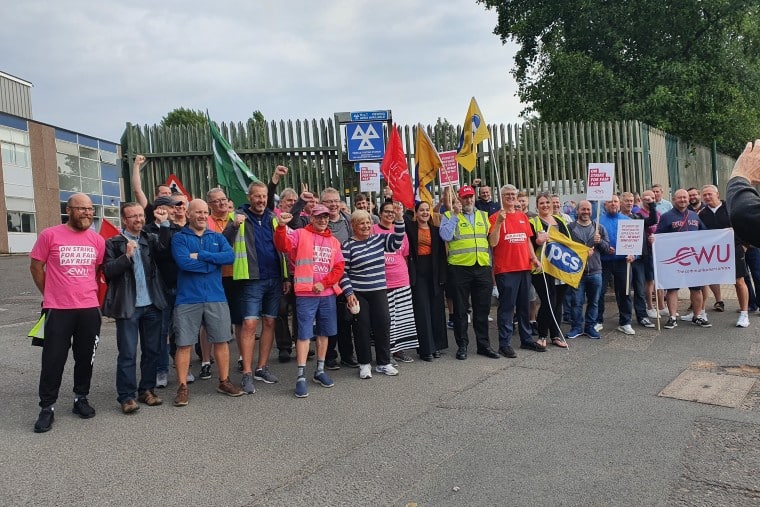 CWU workers on strike in Basford in Staffordshire this week (Picture: Richard Buckwell)

It is possible to imagine a world of strikes without the need for ballots, voting thresholds, time limits and notices of action. In the 1970s none of these existed.  They were all new inventions to try and sedate strikes and struggle and attack unions.

Bosses have always recognised the danger of organised workers going on strike. Sometimes they deal with this through trying to accommodate unions. At other times they go on the attack.  As early as 1901 the House of Lords upheld the Taff Vale judgment that ruled trade unions could be sued for damages caused by strikes. Such laws have often led to resistance.

Taff Vale set in train the developments that led to the foundation of the Labour Party by union leaders. The 1970s also saw a mass fightback against the Industrial Relations Act that limited rank and file action. During Margaret Thatcher’s time in office, throughout the 1980s, and in the years following, governments ­introduced a swathe of anti-union laws.

These brought in secret ballots, notice periods, restricted the location of ­picketing, outlawed political strikes and secondary action—strikes over issues outside your own workplace. Closed shops—when all ­workers are required to be part of the ­workplace’s union—were also eroded and eliminated.

Unions were subject to sharp scrutiny with rules on funding and the election of leading officials. Unions became directly liable for members’ actions with fines and seizure of assets.David Cameron’s government pushed through the Trade Union Act in 2016. It brought in minimum turnout thresholds for strike ballots and increased the notice period before action.

The turnout rules prevented a number of national strikes. The plan all along has been to intimidate workers from striking and strengthen bosses. It is also to rip ­control from militant rank and file workers and place power in the hands of the most cautious and restrictive parts of the union bureaucracy.

For instance, the justification behind weakening and eventually banning closed shops was to stop “discrimination”.

But the effectiveness of blunting rank and file action was not simply the tragic outcome of attacks from the Tories. It was only possible thanks to inaction and acceptance by union leaders. Often no one is prosecuted or fined for breaking the laws. In recent times workers have shown this.

In May, outsourced workers for Welwyn Hatfield Borough council in Hertfordshire launched an unofficial strike. This led to the removal of a sexist, racist and bullying manager. Nobody was disciplined, instead the union was stronger.

Just two months ago a wave of unofficial strikes by thousands of workers across oil ­platforms in the North Sea won real gains.  But laws banning such actions have been allowed to become the norm. They are also used by union officials as an excuse for why action is difficult or impossible.

The anti-union laws have been largely successful in the Tories’ and bosses own terms—without having to be used very often. Yet when they began they were nervous about what resistance they might face.

Even during the Miners’ Strike of the 1980s, laws weren’t used to suffocate action until the strike was already weak.  Laws were used against it only once it was isolated and betrayed by Labour and most union leaders.

The problem is that each set of laws becomes accepted as a norm. In just five years it’s become ­automatic for union leaders to impose the turnout thresholds before action.

NHS workers across England and Wales rejected the Tories’ insulting  3 percent pay award last year.  While more than three quarters of those that voted said they wanted to strike, the turnout was 24 percent. So an opportunity by  a popular group of workers at the height of the pandemic was missed. For union bureaucrats the functioning of the union and the existence of the union and its assets is the priority.

Full time officials, insulated from the stresses and pressures of work, grab  big salaries and perks.  The Polish-German revolutionary Rosa Luxemburg wrote of how the ­professionalisation of trade union ­leadership had dire effects.

It led to “the overvaluation of the organisation, which from a means has gradually been changed into an end in itself, a precious thing, to which the interests of the struggles should be subordinated.  “From this also comes that openly admitted need for peace which shrinks from great risks and presumed dangers to the stability of the trade unions.”

All of this is threatened when faced with direct confrontation with the government. So, it’s a situation they avoid. That doesn’t mean to say union leaders are the same as bosses and can’t or won’t sometimes reflect the feeling at the base or lean to the left.

Without workers fighting back, union leaders have no reason to exist. Yet the officials exist to make compromises, not overthrow the system.

And many union leaders also have strong links with the Labour Party, even when it lets them down repeatedly. Under Tony Blair and Gordon Brown from 1997-2010, none of the anti-union laws were rolled back. But there were some laws that introduced protection for equal pay and minimum wages. This kept the bureaucrats happy and stopped them from really criticising the lack of action.

As the level of struggle rises again, there needs to be real rights against new anti-union laws. And it’s good to see more workers ignoring or defying them.

Workers at the Ineos refinery in Hull took unofficial action in May over late and mistaken pay. None were sacked as a result.

More of this would give confidence to other workers to do the same and defy the bosses and union chiefs. The web of laws makes a difference in how workers can strike, but workers’ self-action is not actually illegal. It opens unions and sometimes individuals up to damages.

And there are many methods of struggle that are not outlawed.  So there is no need for a consultative before a strike ballot.  Yet the idea of such a ballot is ingrained in the heads of many union leaders.

Nothing stops workers from striking for indefinite periods or deciding to vote for all-out action.

Picketing is legal, and despite laws limiting six people to a picket, picket lines bigger than this happen all the time with little recrimination.

Every time workers come out. They should aim to build pickets as big as possible. Mass solidarity demonstrations can be called to support action, like the ones that heightened support for striking university workers in the UCU union. When the police show up to intimidate workers, it often does the opposite. Instead it usually riles up workers and makes them fight even harder.

Amid a crisis where workers are being hit hard, it will be essential to vote against lousy pay deals and question the tactics of compromising union officials. With class war raging on, workers must be the ones leading the fight—against new laws and in defiance of those that exist.

Pentonville 1972—When workers fought and won

Last week was 50 years since rank and file workers showed the full potential of their militancy—a show of force needed today. The 1972 Pentonville strikes were triggered after five dockers were imprisoned in Pentonville prison, London, for picketing.

They were targeted under the new National Industrial Relations Court (NIRC), which was set up a year earlier to break struggles and strikes.  ut unofficial solidarity walkouts snowballed into mass strikes across Britain, all organised by the rank and file in defiance of union leaders.

The mass action came after a two-year battle with the Tories.

The Industrial Relations Act 1970 limited “wildcat” strikes from the shopfloor and banned “blacking”—refusing to handle work done by striking workers. By January 1972 300,000 miners had come out on national strike, and around 25,000 engineering workers in Manchester ­occupied 30 factories from March to May. Dock workers in Liverpool picketed at depots to defend their jobs.

Bosses complained to the NIRC that could act against  unofficial strikes.  The NIRC threatened a group of London ­dockers in for picketing and refusing to handle goods.  Dockers met three days later on 15 June and voted to strike, leading to the charges being dropped.

By July the Midland Cold Storage company applied to the NIRC to shut down a picket at its east London depot. But the pickets continued, and five dockers were arrested on Friday 21 July and sent to Pentonville prison.

As a result every docker in Britain walked out on unofficial strike, and workers held mass pickets outside the prison. Electricians struck that night, and on Saturday, dockers targeted national ­newspapers.  They marched down Fleet Street in central London, urging printers to join.

From Monday 24 to Friday 28 July, national daily newspapers and London, Manchester and Liverpool evening papers were not published.  A demonstration of up to 30,000 workers assembled at Tower Hill, London, on Tuesday 25 July and marched to Pentonville. And some 250,000 workers unofficially struck.

After a heated debate on Wednesday, the TUC General Council voted to call a one-day general strike for the following Monday.

But the dockers were released on Wednesday evening, followed by an official dockers’ strike that continued for three weeks. The mass action broke the NIRC, which was abolished in 1974.

Ordinary workers had humiliated the bosses and the Tories, broken anti-trade union legislation and defied some union leaders to win victory.

A timeline of anti-trade union laws

Security on union and political fund ballots, with power to repeal postal and printing costs of balloting
Required scrutiny of finances and increased on ballots
All industrial action ballots to be fully postal
Required seven days’ notice of intention to ballot and notify employer of result

All ballots need  at least 50 percent of those eligible to take part in the vote.
Those “normally engaged” in “important public services” need 40 percent of those entitled to vote to be in favour, as well as simple majority
Give 14 days’ notice of action
Requirements for picket supervisors