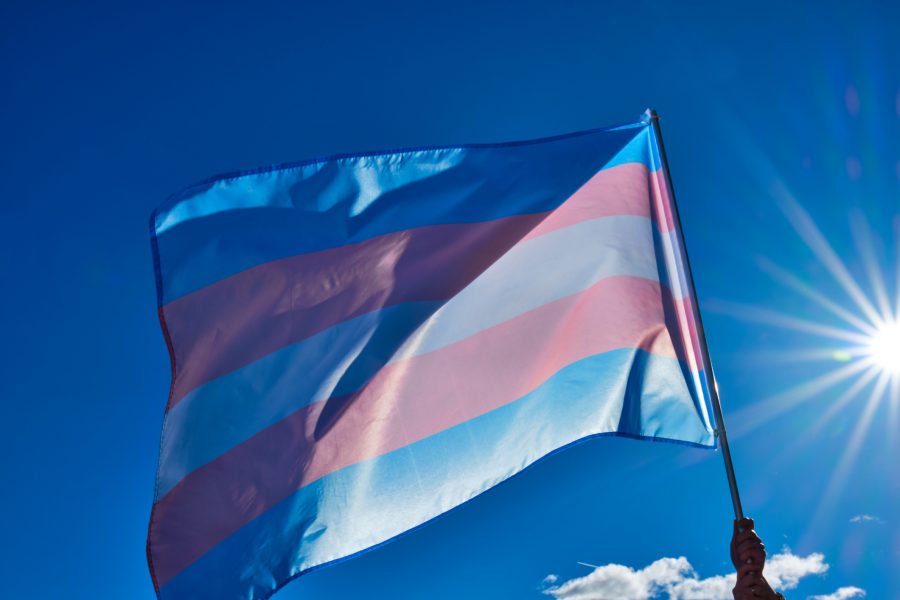 The election of a Trans Officer to National Labour Students Committee is an opportunity for Labour to finally take a clear line – and say that the struggle for trans liberation is a matter for every progressive.

The campaign to stoke up distrust and hatred towards trans people is having a devastating impact. (Alvaro Moreno Perez / Getty Images)

Over the coming weeks student members will be able to elect a new Trans Officer to their National Labour Students Committee. This comes after a hard-won victory by the current Young Labour team to deliver the first official Trans Officer election in the Labour Party’s structures.

This moment should signal a new measure of acceptance for trans people in the labour movement, but while the youth wing of the party makes strides forwards, the same cannot be said at every level.

While Tory leadership candidates have spent the last two weeks relentlessly attacking the trans community in an onslaught that made even Theresa May blush, Labour too has refused to act on instances of transphobia throughout the party from inaction to complaints to conduct of frontbenchers. To add to the onslaught, last week Shadow Chancellor Rachel Reeves launched into a tirade about the trans community in an interview with the Times, saying that a woman is ‘somebody with a biology that is totally different to a man’s biology’ and that she would ‘have a problem’ with trans women using women’s spaces.

Under Starmer’s leadership, MPs like Rosie Duffield have acted with impunity, using their platforms to spread vitriol about the trans community. As a non-binary member in Canterbury I have witnessed first-hand the damage this has done to the local party. Young queer members have quit in their droves, and trans students in the constituency have been alienated by the very person they hoped would champion their rights in Westminster. It speaks volumes that in its attempt to distance itself from the so-called ‘debate’, Labour has allowed reactionary transphobia to grow among its ranks while leaving some of the most vulnerable in society without a political ally.

How Did We Get Here?

Transphobia is not new to British politics. In the Conservative Party, good old-fashioned anti-LGBT+ paranoia is commonplace, and the attitudes of the 1980s have certainly not been eradicated, but it is a shock even to the establishment that the hysteria surrounding trans people would reach such heights that it would become the leading policy of every Tory leadership candidate in recent weeks.

Perhaps even more alarming than the conventional bigotry of the Tory Party has been the rapid spread of transphobia across centre and left politics. The intensity with which people with once progressive views on LGBTQ+ people have become radicalised has been terrifying.

Many people who consider themselves liberal and rhetorically endorse ideas of ‘freedom’ are now reducing womanhood to our reproductive systems, shunning trans people to the sidelines of society, and demanding the enforcement of binary gender that exposed their real ideology—authoritarianism.

The obsessive behaviour of those taken in by anti-trans rhetoric has only got worse in recent years. Those that historically took the approach of claiming to want ‘debate’ now shamelessly orchestrate constant streams of attacks on trans people and their allies. This by no means excludes those supposed to be our progressive allies. So-called trans-exclusionary radical ‘feminism’ has proved a handy veneer of respectability for bigoted opinions.

Trans commentary from liberal outlets like the Guardian and the New Statesman has a lot to answer for in this sense. Just in the last month, the Guardian has published several ‘gender-critical’ inflected opinion pieces, including a long-form interview with anti-trans campaigner Maya Forstater. Just this week, NS published this piece praising the Tories’ cruel weaponisation of trans issues in the leadership race. The space given to trans voices or their allies? Almost nonexistent.

The campaign to stoke up distrust and hatred towards trans people (alongside the left’s failure to call it out) is having a devastating impact. Polling by YouGov has shown a dramatic shift in public opinion against trans women being able to live their lives freely, with dignity and without prejudice. On social media and the streets we are seeing a huge increase in trans people sharing stories of abuse, harassment and isolation. The personal impact of this relentless campaign is one of the ugliest and most vicious in today’s society and in many ways given a ‘free pass’ by politicians and even by some socialists.

There’s a great deal of projection onto the trans community as somehow authoritarian, identitarian, or vengeful. This view is unfounded, reactionary, and dangerous. It reflects a festering intolerance led by the right and their allies in the media.

Ultimately, the root cause of all this reactionary discomfort is the fact that trans people represent something they find unthinkable: true liberation.

We’re told too often that opposing transphobia is a ‘culture war’ we shouldn’t get involved in. We see time and time again left candidates who fail to commit to the barest level of respect for trans causes. The pressure is always on LGBTQ+ people to quietly accept the creeping transphobia in our ranks, but never on socialists to demand a commitment to trans liberation in our movement.

So, why is it the job of socialists to stand up for trans rights and to finally say enough is enough?  For one simple reason: socialism is the path to liberation. If we won’t do it, who will?

Rising prices are pushing families to breaking point, but just as the Tories drive a wedge between communities blaming inequality on migration, they now point the finger at the next group disproportionately affected by the cost-of-living crisis: trans people.

While we campaign to defend our NHS services, trans people are denied basic healthcare for months, and increasingly years, as a result of austerity and the Tory war against trans healthcare. With wages stagnating and the Tories legalising new measures to undercut workers, workers have more common cause with the trans community than ever. Those that have historically suffered the rawest deal under capitalism—women, people of colour, immigrants, and refugees—will all be targeted. Together we already face the extra strain of workplace discrimination and insecurity, on lower pay and at greater risk of redundancy. Solidarity is survival.

Whether cis or trans, we will all only truly be safe from violence when oppression, poverty, and exploitation are defeated. Trans identity is not at odds with human flourishing; the liberation of the two go hand in hand. We’re fighting for a society that banishes inequality in all its forms. A society wiped clean of gendered oppression, of ruthlessly enforced conformity, can only be brought about through a mass project of root-and-branch social transformation.

We’re not asking cis comrades to parrot lines and walk on eggshells around pronouns. Trans rights are human rights, yes. But it’s deeper than that. Trans people are not a caged-off group to whom you must show a requisite amount of tolerance. Everybody is caged in by the constraints of gendered oppression. Every worker experiences the economy through the modality of their gender. Every woman care worker, teacher, and nurse knows how it feels to be paid less than their male counterparts. They know how it feels for their work, often the most vital work there is, to be undervalued by our capital-first economy.

We in the trans movement can no longer afford to be simply defensive. There are legislative and cultural battles we have to win, but first we have to create some breathing room for the trans community across the UK who are under real threat. That starts with socialists standing shoulder to shoulder with us, fighting for a better world.

Back to the Labour Party

This week, we’re launching our trans rights pledge card. We’re asking individuals running in this summer’s Labour internal elections, as well as MPs and ordinary members, to support five simple pledges. We cannot sit and wait for Labour to act like a trans-inclusive socialist party. We, as a mass movement, will have to make it one.

We urgently need reform to the legal processes of gender recognition, and a less punitive healthcare system for trans people. But real trans liberation will only come alongside a broader vision for change—one we’re going on the offensive for.

We recognise that the route to a socialist transformation in this country lies with the Labour Party, created by the working class. Despite its many problems and contradictions, Labour has been through innumerable changes in its more-than-a-century lifetime, and will change again. Socialism and trans liberation are inextricably linked. We can rebuild Labour into a trans-inclusive party of the many, but we cannot sit and wait for society to change or ignore the duty of socialists. We are the change. But it will take all of us confronting this struggle to win.

To support extending representation of the trans community (including non-binary people) at all levels of the party, including establishing Trans positions on the NEC, at CLP level, and at every level that LGBT+ representation is currently provided for. The Labour Party has for the first time provided for trans representation in our new student wing—there is no reason this cannot now be extended throughout the Party.
To call for an urgent investigation into the backlog of transphobia complaints involving senior members of the party. Labour cannot become a truly inclusive organisation unless LGBTQ+ members can trust action is being taken to deal with transphobia.
To insist that the Labour frontbench does not waver on trans rights, and is clear that reforms to the GRA and measures like Self-ID are Labour Party policy that would be implemented by a Labour government. Trans lives are not a political football in a culture war, or a joke—the Labour Party should give no ground to those that fail to recognise this.
To push for greater understanding of and policy formulation to address the struggles trans people face across the UK and abroad. A lack of access to gender-affirming healthcare, employment, and housing, and widespread discrimination and unrelenting abuse, are just some of the challenges trans people face in 2022.
To recognise that the struggles facing trans people are also class issues, and as a workers’ party Labour must be a vehicle for the struggles of trans people and a welcoming political home for them. This must be reflected in the development of Labour policy and throughout internal procedures and culture. In doing so the party must closely engage with trans members and trans support and community groups across the UK and internationally, such as Gendered Intelligence and Stonewall.