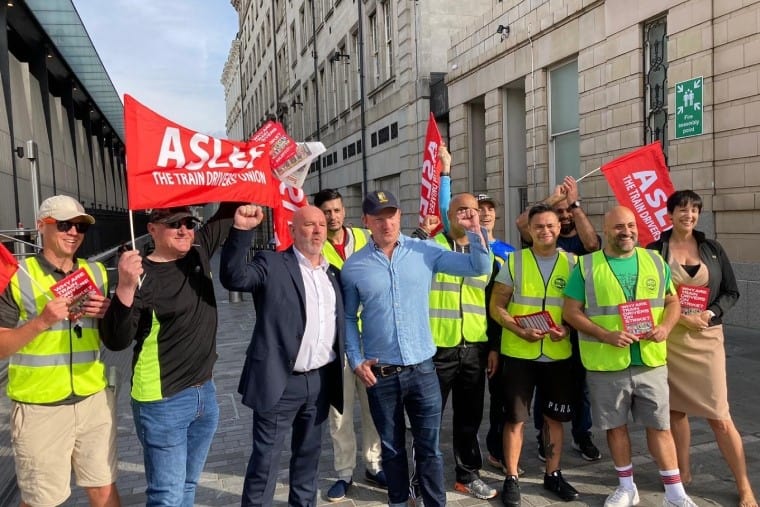 Around 6,000 drivers at seven train companies struck on Saturday, marking the latest walkout in a week of pay strikes by rail and telecoms workers.

Ian, a train driver on Southeastern, told Socialist Worker, “We haven’t had a pay rise in three years due to various measures. We are the third lowest company in terms of pay, in the most expensive area of Britain.

“Working throughout the pandemic and multiple roster changes have caused a lot of animosity towards the company and government. It’s time for all workers to unite. Enough is enough.”

He added, “I can only see it getting worse with Rishi Sunak or Liz Truss becoming prime minister. We need a change of government.”

Outside Bristol Temple Meads station, the Aslef branch secretary told Socialist Worker the strike had a big impact. “There’s roughly one train an hour running to London, but other than that there’s a complete shutdown of the network,” he said.

The branch secretary added that workers are fighting “at least the rate of inflation at the absolute minimum”. “Inflation is not going to go away, energy prices are expected to rise by at least 65 percent in October,” he said.

“That’s going to continue to fuel inflation. Workers are going to be left behind unless workers get pay rises of at least inflation.”

The train drivers’ strike on Saturday was part of a brewing revolt over pay, as the RPI measure of inflation soars at 11.8 percent.

Over 40,000 RMT union members at Network Rail and 14 train operating companies struck on Wednesday. And around 40,000 BT workers walked out on Friday—and are set to again on Monday.

Aslef strikers  received masses of solidarity from other trade unionists and passersby. Unison and RMT union members joined the pickets outside Euston in London. Unite union members brought solidarity to New Cross Gate in south London and the CWU union members came down in Swansea.

Striking worker Nigel from Leeds told Socialist Worker, “Workers understand it’s about workers and the support has been really good.

“There’s been no offer on pay for the people who worked on the frontline during the pandemic. Enough’s enough.”

“To stop climate chaos, we not only need to move away from fossil fuels. We also need to have a publicly-owned, sustainable and affordable public transport system for the many, not the few.”

Aslef members will return to picket lines on 13 August. And more drivers are being balloted to join the strikes at Chiltern Railways, Northern Trains, TransPennine Express and East Midlands Railway.

Chiltern drivers were due to strike on Wednesday.  But Aslef leaders withdrew the notice of strikes after bosses wrote to the union to challenge the ballot process.

The train drivers are right to take action to beat back stagnant wages in the face of soaring inflation.

Every socialist, trade unionist and campaigner should throw themselves into building solidarity for the rail and BT workers.

Trade unionists in other sectors have to keep up pressure on their own leaders to ballot for strikes over pay—and quickly.

Ian is a pseudonym.
Information of your local picket line on 13 August aslef.org.uk/news/picket-line-information-show-your-support