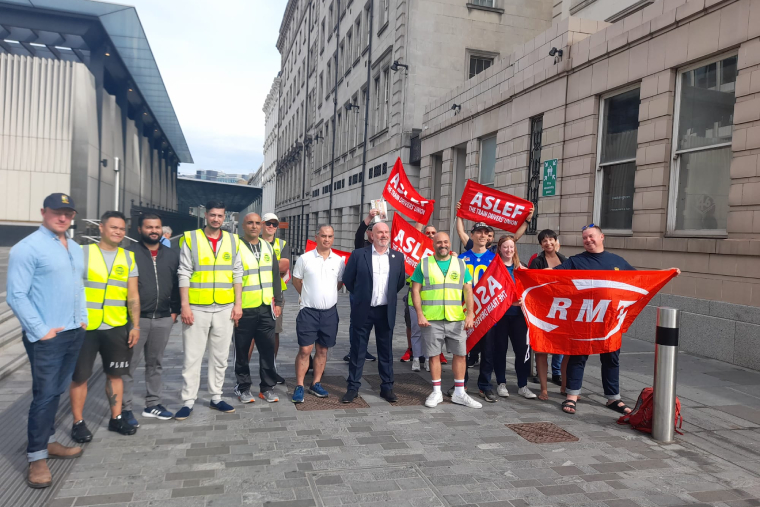 Keir Starmer might have thought he’d resolved his party’s crisis with a shift to the right and a war on the left.

But he can’t get rid of the mass of contradictions that always threatens to wrench it apart. In waging a war on the left, he’s opened up a new one with trade union leaders.

When Starmer sacked Sam Tarry as shadow transport minister last week it wasn’t just because Tarry had appeared on a picket line. It was also because Tarry said openly that workers should get pay rises in line with inflation.

That’s out of order in a Labour Party that’s desperate to win over the bosses who are determined to protect their profits by keeping wages down. So Tarry had to go.

Yet in the hours after his sacking, Tarry said seven different trade union leaders had contacted him in outrage at Starmer. Sharon Graham, leader of the Unite union—Labour’s biggest donor—said the sacking was “another insult to the trade union movement.”

It encapsulated the growing confrontation between the two most powerful blocs in the structure of the Labour Party—the parliamentary party and the trade union leaders.

The split between union leaders and MPs is different to that between the parliamentary party and the membership. Labour members tend to look to the party as a vehicle for progressive, even socialist change. But for union leaders, it’s an alternative to class struggle.

They want Labour in parliament to deliver some protections or improvements to workers’ wages and conditions through legislation and negotiations with bosses. That way, they hope, they won’t have to organise as many strikes.

Yet Labour’s commitment to proving itself a “serious,” “responsible” party of government means it’s often at odds with trade union leaders. This isn’t something that began with Starmer—or even Tony Blair. It’s been a feature of Labour politics since the very start.

But Labour’s current crop of leading politicians do sum up the attitude very well. Rather than supporting strikes, Labour is a party that will mediate with bosses to make sure strikes don’t happen.

So Starmer said last week that “The Labour Party in opposition needs to be the Labour Party in power. And a government doesn’t go on picket lines.” Meanwhile shadow minister Anneliese Dodds pointed to the Welsh government as an example of how Labour in office holds off strikes.

The problem is that this comes amid a major assault on workers’ pay and living standards by bosses determined to make them pay the price of Covid shutdowns and inflation.

Trade union leaders have to provide some protection from this onslaught to prove their worth to their members and protect their own positions. That’s what’s pushing them into organising more strikes. The Labour Party is not only refusing to help them—but threatening to stand in their way.

Cracks had already started to appear in the relationship between union leaders and Starmer’s Labour Party. The CWU union last year cut some of its funding to Labour, and Unite has threatened to do the same. The Bfawu union even voted to disaffiliate altogether.

Now those cracks are becoming chasms and some union leaders are turning away from the Labour Party.

It’s not inconceivable that, if Labour really does no longer offer them nothing, union leaders may start to cut their ties with it.

There are limits. The second half of Labour’s claim to be a “government in waiting”—its promise of negotiations and harmony with the bosses—is hugely appealing to union leaders. That means, if a new Tory leader feels confident enough to call a snap general election, union leaders may still fall into line.

Starmer’s argument to them will be, “Let me campaign without any awkward questions about whether we support strikes, and things will be easier for you under a Labour government.”

But for now, Labour is setting itself as a government that will fully side with bosses’ assaults on workers’ pay. It’s certainly not the alternative to struggle that union leaders want—and that’s one factor pushing them into organising more strikes.