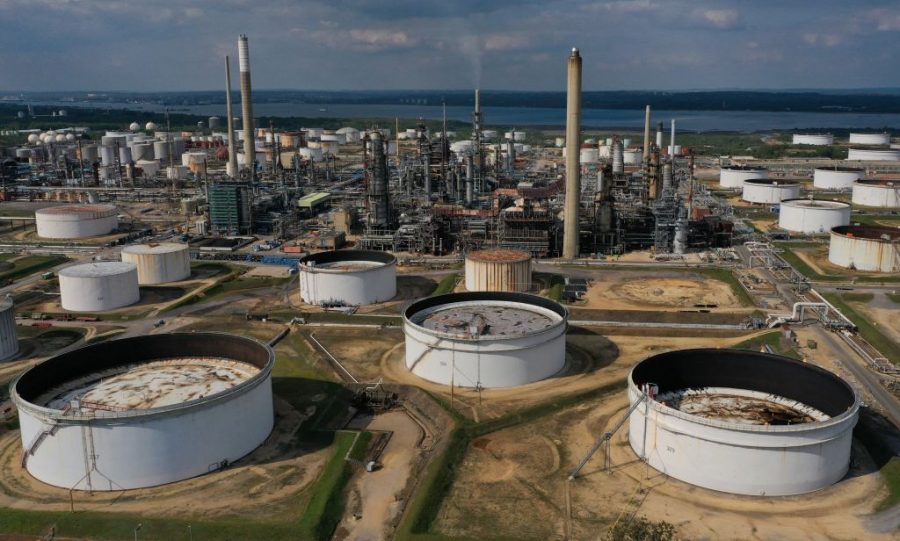 To stop the worst of climate change, we have to choose: Are we going to save the planet or are we going to continue making fossil fuel companies happy? It’s impossible to do both.

In the climate change era, if ExxonMobil is celebrating legislation, it’s a bad sign. So when the company’s CEO, Darren Woods, last week lauded Congress’s new climate spending bill, that was a warning not just about the specific “all-of-the-above” energy provisions in the bill but also about our continued unwillingness to make binary choices, even when they are necessary.

Choice avoidance is the Washington Consensus. Politicians seeking to simultaneously appease voters and their CEO donors routinely tell us we get to have our cake and eat it too. They insist we can have billionaires and shared prosperity, legalized corruption with democracy, lower inflation plus corporate profiteering, and a livable planet alongside a prosperous ExxonMobil. You name the crisis, and we are infantilized to believe the world is an all-you-can-eat buffet and that either/or choices aren’t necessary.

It is an alluring fantasy — but the last decade shows it is just that: a fantasy.

Think about health care. In 2009, we were told we did not have to follow every other industrialized country and choose universal health care over corporate health insurance. Instead, President Barack Obama promised a “uniquely American system” that would avoid such a choice — it would create robust health insurance and pharmaceutical profits, and also a humane system of medical care for all.

A decade later, reality tells a different story: health insurance and pharmaceutical giants are making huge profits, paying out billions to executives, and jacking up prices — but millions remain unable to access basic care. Even now, after the corporate health care system delivered hundreds of thousands of preventable pandemic deaths, we’re avoiding the necessary binary choice to discard the current system and embrace something like Medicare for All. Despite a recent government report touting the benefits of making that choice, we’re told the best solution is choice avoidance — just giving more government subsidies to the same predatory insurers rationing care.

After the 2008 financial crisis crushed millions of Americans, lawmakers said we didn’t have to choose to reinstate New Deal laws that safeguarded against such crises. They told us we didn’t have to choose to nationalize, break up, or limit the size of financial institutions. And they assured us we didn’t even have to prosecute or fire the specific bankers who engineered the meltdown. Instead, their solution was just propping up too-big-to-fail banks with bailouts and cheap money, shielding financial executives from punishment, and creating some light-touch regulations that fundamentally change nothing.

A decade later, Wall Street profits and bonuses are booming, the financial services industry occupies an outsize share of our economy, and governments are funneling even more cash into that sector. Meanwhile, banks have extracted nearly half a trillion dollars in overdraft fees from consumers, and some experts say another financial crisis is on the horizon.

Now comes the climate crisis, where the costs of decades of choice avoidance are wildfires, droughts, fire tornados, deadlier hurricanes, derechos, and all sorts of other weather monsters. As scientists say we only have a few years left to prevent climate change’s worst effects, we are at another decision point — and yet we are still refusing to choose.

While Democrats tout their spending bill’s important new investments in clean energy — and they are important — the legislation includes language making new solar and wind projects contingent on expanding oil and gas leases on federal lands and waters. The more clean energy we build out, the more dirty energy becomes available for fossil fuel companies to extract and burn.

This provision was the bribe for a long-sought vote from Senator Joe Manchin (D-WV), a coal magnate who is Congress’s top recipient of fossil fuel industry cash, and whose staff reportedly confers weekly with Exxon’s lobbyists.

Natural resources law professor Sam Kalen told Bloomberg that this language is “one of the worst policy provisions I’ve seen,” while the Center for Biological Diversity’s Brett Hartl called it “a climate suicide pact.” Scores of climate groups demanded the language be eliminated before the bill is passed.

Other climate advocates insisted the existing legislation will still reduce emissions and therefore must move forward. Sociologist Daniel Aldana Cohen astutely noted that even if passed in its current form, the legislation will be “opening new terrains of struggle . . . where this unlocks enough investment for new coalitions to fight over, which in turn accelerate and transform policy landscapes across scales.”

Whatever you think about the bill, the United States government’s refusal to make a binary energy choice is exactly why Exxon’s CEO and the fossil fuel industry are celebrating. They are thrilled that somehow — even at this late hour in the climate cataclysm they created — their bankrolled lawmakers are still pretending fossil fuels and a habitable ecosystem can coexist.

“We’re pleased with the broader recognition that a more comprehensive set of solutions are going to be needed to address the challenges of an energy transition,” said ExxonMobil’s Darren Woods.

The company added in a statement that the “government can promote investment through clear and consistent policy that supports U.S. resource development, such as regular and predictable lease sales, as well as streamlined regulatory approval and support for infrastructure such as pipelines.”

“This provision was quite a pleasant surprise,” Sgamma told Bloomberg. “Tying wind and solar to oil and natural is actually a really clever all-of-the-above energy move. The bill forces them not to neglect oil and natural gas.”

That “all-of-the-above energy” strategy — an Orwellian motto parroted from Manchin himself — is the climate version of the pernicious choice-avoidance ideology. It comes only months after United Nations scientists effectively warned that an all-of-the-above energy policy that includes fossil fuels is climate denial that will destroy the world.

The good news in their report is that we still can quickly stave off the worst effects of climate change and save our ecosystem. But we can only do that if we stop pretending we never have to make a choice. The science is clear: to save our species, we must halt new fossil fuel development. Now.

That requires making the kind of binary, zero-sum choice we almost never make — in this case, a choice to discard one resource for another, not tie clean power to dirty energy.

Such binary choices take us out of our comfort zone. They require us to acknowledge disturbing realities and accept the prospect of change. They require conditions and fortitude that remains in short supply.

To survive this emergency, we need honesty from news outlets that may not want to tell hard truths about choices that might reduce their advertisers’ profits.

We need maturity and climate focus from voters who have gotten used to being sold choice avoidance and easy fixes.

And, most of all, we need integrity from political leaders who keep promoting “all-of-the-above” fictions that imperil our world.