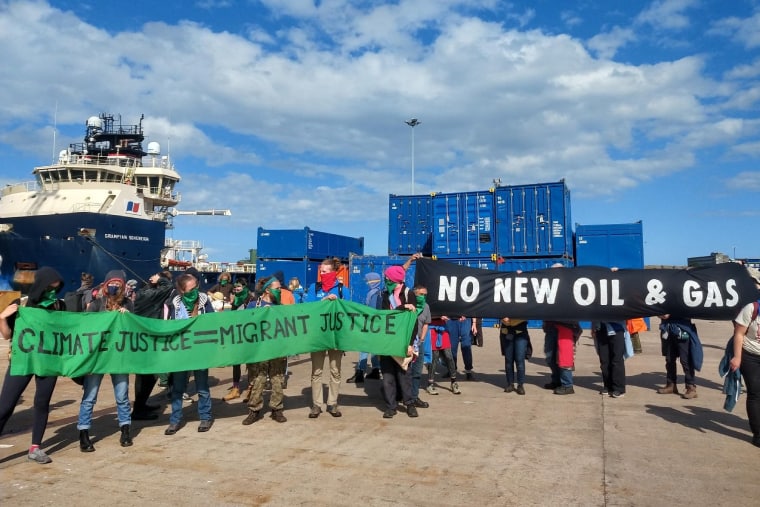 Protesting for the climate outside Torry Marine Base in Aberdeen Harbour (Picture: Twitter/ @ScotClimateCamp)

Hundreds of climate activists mounted a five day camp in Aberdeen from Thursday of last week. They are fighting new fossil fuel projects planned for the area. Protesters occupied the Torry harbor and discussed where next for the climate movement.

People at the protest criticised the multimillion-pound plan to develop the Energy Transition Zone in Aberdeen, which is supported and funded by the Scottish government. This project will not only rip up limited green space but prioritise unproven technologies such as carbon capture over renewable energy.

And activists called for Aberdeenshire council to reject plans for a new gas-fired power station at Peterhead and for the British government to end all new fossil fuel infrastructure projects. Jessica Gaitan Johannesson, spokesperson for Climate Camp Scotland, said, “As the pressure mounts on companies and the British government to bring carbon emissions down, we need to be honest about their true priorities.

“These are not to save lives and livelihoods, but to hold on to power and wealth at all costs. Allowing the power over an energy transition to stay in the hands of fossil fuel executives will not only result in emissions continuing to rise—and increased climate catastrophe for all—it will also lead to worse suffering for those who did the least to cause climate collapse, in Aberdeen and around the world.”

The camp came after fossil fuel giant Shell announced its final decision to back the Jackdaw gas field last Monday.  The Greenpeace charity has launched a legal challenge against the move. It slammed the Jackdaw project and calculated that it would emit as much carbon dioxide emissions as the whole country of Ghana.

Oil and gas transition campaigner for Greenpeace, Philip Evans said, “This Jackdaw approval is a scandal. The government knows that burning fossil fuels drives the climate crisis, yet they’re approving a new gas field in June, without proper climate checks, and declaring a national emergency over heatwaves in July.

More protests and action are needed to halt the bosses and the Tories’ attempts to build more poisonous and polluting fossil fuel projects.