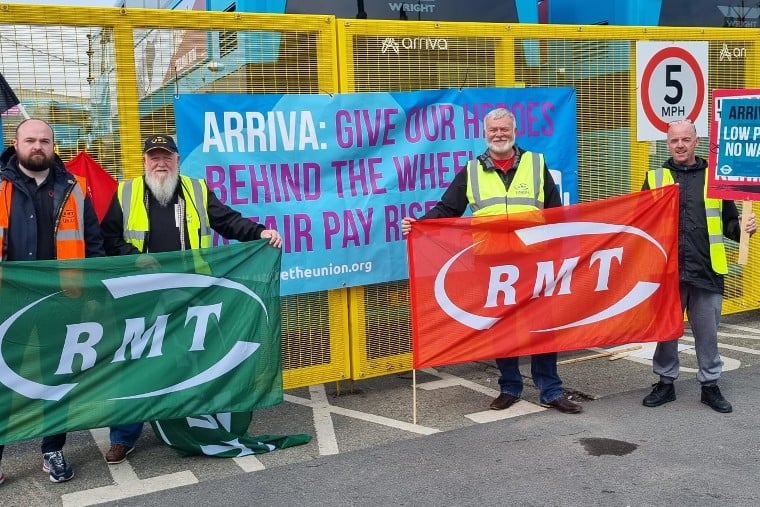 Bosses at Arriva North West are feeling the pressure as an all-out strike by bus drivers entered its third week.

The action—by members of the Unite union—forced bosses to issue a public statement saying the company couldn’t deliver any bus services across the affected area. The workers are fighting for a pay settlement that catches up with inflation.

At the Green Lane depot in Liverpool, strikers explained how the national shortage of drivers across many industrial sectors is giving them an advantage over the employers.

The mood is very strong among the 1,800 strikers, and turn-outs for pickets have been high. Across the region, strikers at the eleven depots are in constant communication with one another. And the reports from each are of solid action and effective pickets.

Unite rightly rejected bosses’ request for talks at the Acas conciliation service, saying that a previous mediation in 2017 was a sham. Bosses also wanted talks with the union on Monday—and initially wanted to hold these in one of the depots. But the union refused, saying that this would mean negotiators having to cross a picket line. Now the Arriva negotiators will have to meet with Unite at the union’s offices in Liverpool.

Unite negotiators have been clear that they will walk out of the talks if the employers are not serious and still only offer below what strikers want. The last week of the strike has been one of mutual solidarity with other groups of workers.

The strikers also met with an LGBT+ activists’ delegation. Chris Jones, the Unite branch secretary, said last Wednesday was an “eye-opener” for the Unite delegation, and that the RMT members were “absolutely thrilled” when they arrived. He described the visit as having been a “great morale booster”.

A solidarity card, signed by striking CWU union members and participants on the Liverpool Pride march last weekend, is being taken to the Arriva picket lines. The strikers know that, with determination and maximum solidarity with other striking workers, they can win over pay.