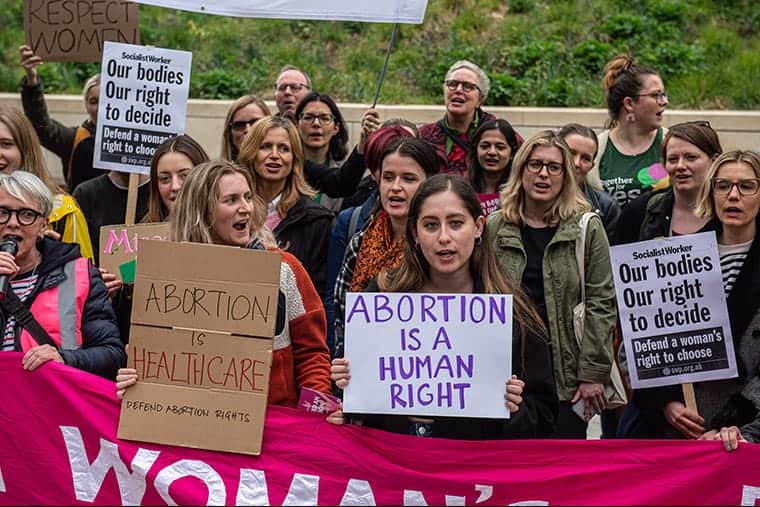 A solidarity protest in London stands with people in the US fighting the assault on abortion rights in May (Picture: Guy Smallman)

People from Kansas sent out a rallying cry for abortion rights on Tuesday, as they voted to protect women.

Voters in a state referendum overwhelmingly backed maintaining abortion access in the Kansas constitution. Early figures show that almost 60 percent of voters chose to keep abortion rights, with official figures due in a week.

The constitution allows pregnancies to be terminated up to 22 weeks with other restrictions, including a mandatory 24-hour waiting period and mandatory parental consent for children.

In Kansas, Taylor Hirth, wept as she celebrated the result with her nine-year-old daughter at a watch party in Overland Park. “I’m a rape survivor, and the thought of my daughter ever becoming pregnant and not being able to do anything about it angers me,” she told the BBC.

“I never thought this would happen here, but we have worked so hard here to get the vote out. Republicans underestimated us.”

The referendum was called by the anti-choice, right wing Kansas legislature. It hoped to wipe out abortion rights access, but its gamble hasn’t paid off. A bitter campaign raged throughout Kansas in the weeks before the vote.

Republicans showed faux concern for women by campaigning under the slogan, “Value them both.” Some churches held anti-choice sermons from the pulpit. And pro-choice activists defaced a Catholic church and a statue of the Virgin Mary.

When the Supreme Court overturned Roe v Wade in June, it meant that individual states had the clout to decide local abortion laws.

The Kansas result is a major defeat for anti-choice bigots who though the staunchly Republican state would vote to axe abortion access. It backs up polling that has consistently shown abortion rights are well supported by ordinary people.

And it shows how the limits on reproductive freedoms are not driven by a groundswell of reaction from below, but rather a tirade of attacks from above.

Rachel Sweet, the campaign manager for Kansans for Constitutional Freedom said, “We did it—these numbers speak for themselves. We knew it was stacked against us from the moment we started but we did not despair.

“We knocked on tens of thousands of doors and had hundreds of thousands of phone calls. We countered millions of dollars in misinformation. We will not tolerate extreme bans on abortion in our state.”

It was a bitterly fought campaign, with the anti-choice side largely funded by the Catholic Church.

Meanwhile in the White House, Democrat president Joe Biden is poised to sign an executive order that he says will help protect abortion access. But the legislation is vague and will take a long time to be implemented. It says that the government should consider ways to expand federal funding for women travelling out of state for abortions.

Yet it doesn’t give any indication of how this could be achieved. Currently the government-subsidised Medicaid programme only covers abortions in 16 states.

It is not enough. His first executive order, signed just days after Roe v Wade was overturned, directed the government vaguely to “take action”.

Biden’s failure to move swiftly to protect abortion rights is a question of political will and shows the dead end of Democratic party politics. And his reluctance to speak on this question is a desperate attempt to appeal to the right.

There are upcoming set-piece battles for abortion rights. California and Vermont are holding state constitution referendums in November.

The Kansas result is an important one. At a time when abortion freedoms are under relentless attack from the top of society, it shows that they are more contested among ordinary people. And the more contested they are, the more opportunities there are to win others round to the pro-choice battle.