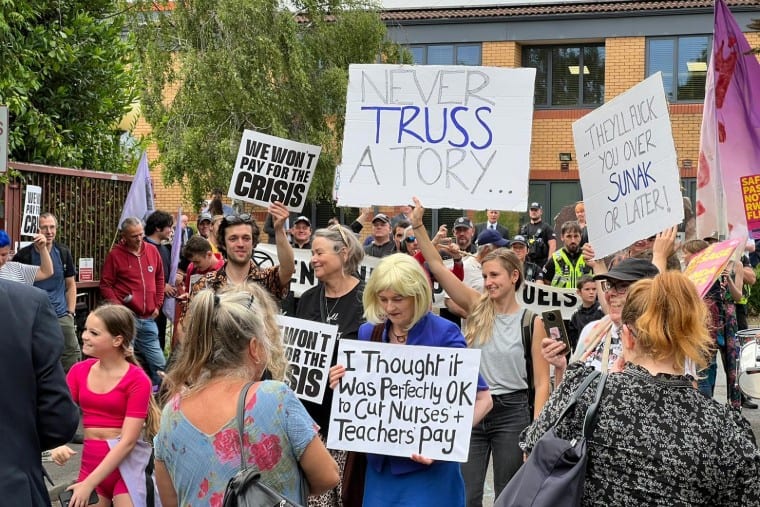 Protesters in Cardiff forced Tory party members attending a leadership hustings to endure a gauntlet of fury on Wednesday. With only a few hours to prepare after discovering the venue, some 60 people gathered to voice their fury at leadership hopefuls Liz Truss and Rishi Sunak and their supporters.

Tories were forced to battle their way through the protesters, who filled the air with chants about child poverty and the racist plan to deport migrants to Rwanda.  There were activists from the People’s Assembly, Stand Up To Racism and Extinction Rebellion—who provided the drumming.

“It was a really good protest,” activist Phil Allsopp told Socialist Worker. “The fact they had to walk between us was incredible. It feels good to shout at a Tory.”

It was an opportunity for everyone who hates the Tories to let off some steam. Some people had travelled from as far as Abergavenny, some 35 miles away,

The commotion of the protest drew in passing children and teenagers who gave the Tories a piece of their mind. “There was a lot of young people, they were really angry. They were walking up to the Tories and saying, ‘you should be ashamed of yourselves’,” said Phil.

Inside the hustings, Sunak doubled down on his support for fracking, the racist Prevent programme, and specifically reaffirmed his commitment to implementing the Rwanda policy.

“Anyone who’s thinking about organising a protest outside a Tory hustings should do it,” said Phil. “Get everybody involved—any networks you’ve got, any trade unionists, any activists, and get people down there.

“It’s definitely worth doing. In coming out on the streets against the Tories you might give people more confidence to oppose Tories in the future.”

Instead of a process involving just a few tens of thousands of the most right wing people in Britain, the rest of us can have our say.

The Tory hustings are: