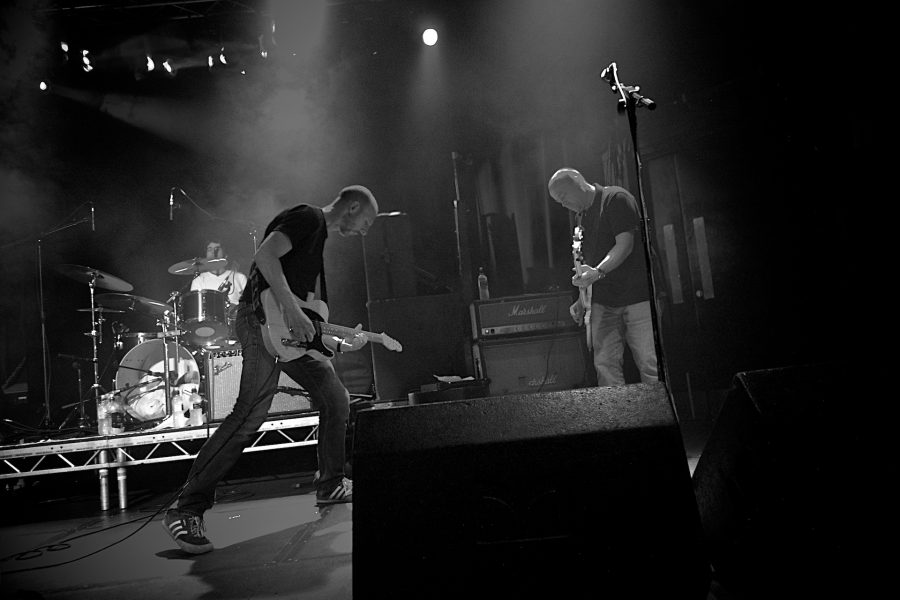 Beyond the one-liners, Half Man Half Biscuit are a true folk group, their songs centring on the frustrations and fatalism of working class experience.

Half Man Half Biscuit at the Cambridge Junction. (Paul Hudson / Flickr via Wikimedia Commons)

Birkenhead’s Half Man Half Biscuit are often patronised as being a comedy band. In the band’s youth, Nigel Blackwell wrote painfully astute songs about dole culture under Thatcher and beyond. Now they are older, their preoccupations are centred around decline and death. If there is a thread that runs through their extensive body of work, it isn’t one-liners, but a consistent preoccupation with working class inertia.

That isn’t to say that a lacerating sense of humour isn’t completely integral to the group’s modus operandi. Half Man Half Biscuit are funny, and it’s through the one-liners that they have generated some genuine cultural trojan horses—particularly in their prime. A cursory Google search will bring up numerous TV appearances of the band playing ‘All I Want For Christmas Is A Dukla Prague Away Kit’, and you’d struggle to find a more astute and droll song about class anxiety (spoiler alert: the privileged kid in your class at primary school will be on the other side of the desk in the dole office). Before arriving at this conclusion, Blackwell meanders through images of headless Subbuteo players and Scalextric kits—and the inevitable reveal is softened by Blackwell wanting to use his giro to find a ‘proper Transformer’. They have a real knack for taking the eminently relatable, knocking it out of shape with surreal humour, and often, gently politicising anodyne observations and situations. That something like this could be beamed into the homes of so many in the 1980s (maybe more had the band not been so committed to watching Tranmere play, thus missing an appearance on The Tube) is somewhat anachronistic now, but the band are still operating in rude health: always punching up and always subverting cliché.

The band’s catalogue is littered with class rants and songs skewering complacency and this writing is at its most forensic and brutal on the latest record, The Voltarol Years. A lot of the usual cultural cornerstones are drawn upon—lower league football, parochial oddballs, lapsed Catholicism—but it comes with a heftier weight now, a sense of fragile mortality quite probably galvanised by the pandemic. Covid-inspired or not, the album delves more extensively into a deep seam that the band have explored for their entire career: you are born, you are trapped by your socio-economic conditions, you die.

This is inextricably linked to one of the main lessons of the pandemic—that class is inescapable. While middle class people baked bread, took up hobbies, and were actually paid to write opinion pieces about how ‘I’m-not-quite-actually-ready-to-reengage-with-reality-yet-actually’, workers across the globe risked their lives to fulfil menial, poorly-paid, and sometimes relatively trivial tasks. The idea of having restaurant quality food delivered to you by someone on a bicycle on a zero-hours contract became exponentially more nefarious during lockdown. Not in recent memory had the wealth divide seemed wider. References to this chasm, and the inability to transcend it, permeate HMHB’s catalogue in spades.

Take ‘Blood on The Quad’, a song in which the narrator simply needs to reveal his postcode and speak in his accent to conclude that his ‘prospects are bleak’ (it’s later revealed that he is dour because he’s the ‘landlord of the pub that gets the cemetery trade’—a perfect example of HMHB’s gallows humour). Blackwell is channelling his inner William Hogarth on ‘If I Had Possession Over Pancake Day’: ‘Outside Goldsmiths coughing up blood/ Turner Prize judge gasps ‘Christ! That’s good!/Leave it as it is, it’ll get first place/We’ll call it ‘A Bullshit At The Coalface.’ The class tension that dominates their oeuvre obviously feels more prescient in peaks and troughs, though if you put words that were written in 1991 next to words from the latest couple of releases, you’d come to the reasonable conclusion that both were written at the top end of that spike.

The band seldom tour outside of the proximity of Blackwell’s own home (he reportedly can’t bear to be away from his own bed for any length of time and doesn’t travel well—it seems inevitable that so many of these songs would come from an agoraphobic residing on the Wirral peninsula). The records replicate this boxed-in feeling, but hardly skimp on imagination—if anything Blackwell puts everything around him under a microscope. He is one of the few writers I am currently aware of who replicates the late, great Frank Sidebottom’s MO: if studied with the keenest eye, the parochial is universal. It’s this aspect of their practice which probably contributes to them remaining a cult concern—but they do have handful of vocal advocates in the public eye.

Most confoundingly, former DWP secretary Damian Green is said to be a fan—one can only assume he was listening to the band’s inaugural albums Back In The D.H.S.S. and Back In The D.H.S.S. (Again) backwards. Much more importantly though is that the band’s active fanbase are absolutely rabid—referencing songs in the way they dress at gigs—and because of the band preferring to stick to a reasonable radius of the the Wirral, make considerable journeys to see the band play. It’s a loyalty which is rewarded, as the band have an anachronistically meaningful relationship with their fans—most recently demonstrated by Nigel scattering a fan’s ashes onstage in Holmfirth, having been asked by the deceased’s friend who was in attendance.

When tackling big ideas, Blackwell’s lyrics still focus on the minutiae for a broader, more impressionistic result (Julian Cope has criticised them for sweating the small stuff, which seems to miss the point entirely). The Voltarol Years showcases some of Blackwell’s most poignant song writing, substantiated by the fact that on recent records the spectre of the grim reaper has become more and more visible. ‘Slipping The Escort’ is ostensibly a song about dementia built on small detail: life insurance adverts, choices of karaoke songs, and—naturally—an obtuse reference to Welsh football team Airbus. Blackwell’s writing has always had the structure of a tapestry, using fragmented, humorous images to build a bigger picture. The band haven’t lost their appreciation for the trivial either: ‘In A Suffolk Ditch’ takes the Room 101 concept and bludgeons the listener with a litany of one-liners, ‘Token Covid Song’ is a reasonably light-hearted piss-take of online narcissism, and highlight ‘Awkward Sean’ is a vivid speculation on a local oddball, using some magnificent cultural references to paint this particular black sheep: ‘We had Slade/We had The Sweet/Sean had Chicory Tip’.

A contemporary touchstone of comparison to Blackwell’s lyrics might be Grayson Perry’s work on the British class system, but there is an obvious difference. Perry had the capacity to be a tourist in two of the three worlds he visited: he is able to flit through the British class system like a ghost. Blackwell lives it, and is consumed by it. In essence, it makes Half Man Half Biscuit not a comedy group, but a true working British folk group. At a time when genuine working class voices are being more and more marginalised across the arts, you wonder how many more voices like Blackwell’s we are likely to hear in the future, or whether somebody of his ilk would be given the space and time to cultivate such a body of work. So let’s make the most of them while we can.

Half Man Half Biscuit’s The Voltarol Years is out now.