Home / News / Why Capitalists Care About Our Record-Low Birth Rate 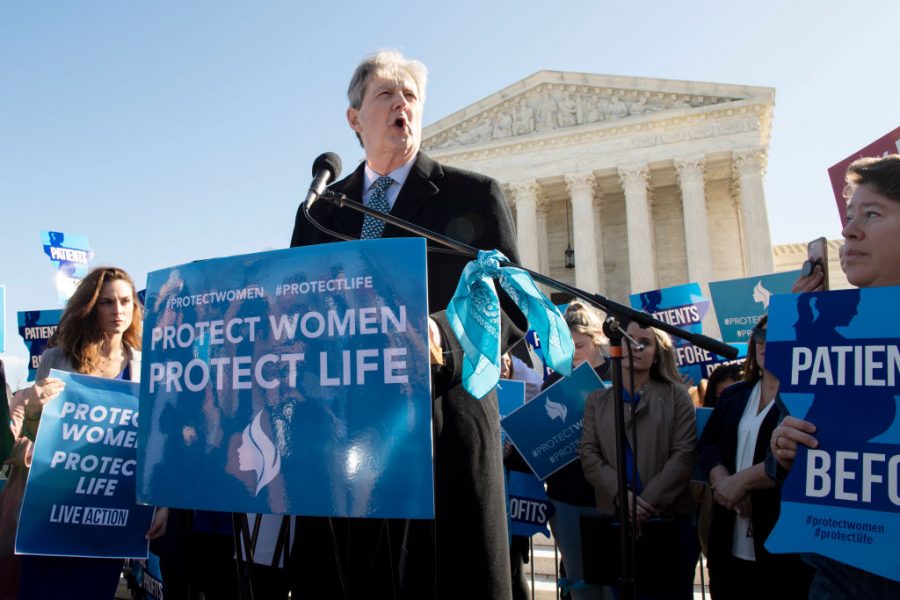 One reason the corporate elite has an interest in antiabortion policies is because they hope to lower the price of labor — the labor of bearing and rearing children.

Senator John Kennedy (R-LA), speaks to a group of anti-abortion activists during a demonstration outside the Supreme Court in Washington on March 4, 2020. (Caroline Brehman / CQ-Roll Call, Inc via Getty Images)

The United States is a particularly hostile environment for parenting. Workers face long hours, inadequate pay, unreliable health care, overpriced housing, paltry unpaid leave, and childcare that can eat a whole paycheck. As a result, the US birth rate is now at a record low of 1.64 children per woman, considerably below replacement.

When Western Europe faced dramatic declines in births in the 1970s, governments instituted universal childcare, long paid family leaves (up to a year), and substantial child allowance checks, on top of free health care. But in the United States, the working class has little political representation, so the costs of bearing and rearing children are largely borne by families. Instead of support, we have faced a cheaper, meaner pronatalism: reproductive coercion.

Paul Heideman argued recently that the corporate class is unconcerned about the birth rate, and that abortion is essentially a fight between ordinary people. In fact, business interests have a huge stake in the outcome of reproductive politics. The fight over abortion is a fight over the labor of reproducing society — and barriers to reproductive control have always been about exploiting this work.

Heideman is right that low birth rates don’t decrease labor supply or increase wages in the short run, something Karl Marx pointed out in the 1860s. But capitalists absolutely have a long-term class interest in an increasing US population. The Financial Times ran a five-part “Baby Bust,” series in April. Just this month, a front-page FT headline blared: “Lowest global population growth since 1950 raises economy fears.” Two-thirds of the world lives in countries with below-replacement birth rates, the story noted, and Europe’s population is now shrinking. “Unless you get a productivity miracle,” Charles Goodhart of the London School of Economics told the paper, “overall economic growth will fall.” And William Galston of the Brookings Institution claims that in the United States, “the principal driver of slow growth since 2008 has been a sharp slowdown in the growth of the labor supply.”

Demographic collapse has been a theme of pro-business think tanks and the corporate press for decades, as I show in my book Birth Strike. Many see Japan as a cautionary tale, blaming the country’s economic stagnation on its declining population. Capitalists care about declining birth rates because economic growth has relied on population growth since the inception of the system. They also fret about the rising costs of supporting the old due to the “coffin-shaped” age structure of populations in developed countries. You can’t offload support for retirees onto their children unless they have children.

Liberal, center, and right all concur that capitalist economic growth is harmed when populations stop growing. But while establishment pundits and planners agree that declining birth rates are a crisis, they disagree on the remedy.

A spate of books starting twenty years ago sounded the alarm. Phillip Longman of the liberal New America Foundation wrote The Empty Cradle, in which he warned of “the threat to the free market as the supply of workers and consumers declines” and suggested making it easier to have kids. The same year, Ben J. Wattenberg of the conservative American Enterprise Institute (AEI) produced Fewer: How the New Demography of Depopulation Will Shape Our Future. He recommended more immigration.

Lyman Stone of the American Enterprise Institute has been tirelessly promoting marriage as a way to increase the birth rate. His 2018 report for AEI, “Declining Fertility in America,” dolefully predicted that “even significant restrictions of abortion or contraceptives would only modestly alter birth rates.” The report’s cover depicts a row of empty bassinets. Marriage is also a hobbyhorse of the American Legislative Exchange Council (ALEC), which promotes a model state law to make divorce harder.

Paleoconservative Patrick Buchanan has been beating the demography drum for decades, penning “replacement theory” books with hysterical titles. In The Death of the West: How Dying Populations and Immigrant Invasions Imperil Our Country and Civilization, he traces low birth rates to the inclusion of sex in the 1964 Civil Rights Act.  In his view, women need to be discriminated against more vigorously so they’ll be dependent on marriage for their livelihood. Birth control, Buchanan suggests, is “the suicide tablet of the West.”

While Buchanan holds up the racist end of the “boost the birth rate” banner, pro-immigration Republicans like former Florida governor Jeb Bush (Immigration Wars) and Jonathan Last (What to Expect When No-One’s Expecting) worry that birth rates in “sending” countries are dropping. The birth rate in Mexico has fallen from 3.47 births per woman in 1990 to 2.1 today. “In many rich countries, worker-hungry businesses are eager for more immigrants,” the Wall Street Journal wrote in 2015. “But to stabilize the elderly share of advanced countries’ population would require an immediate eightfold increase from less-developed countries. . . . This isn’t politically feasible given the resistance that even current levels of migration have generated.” They suggested raising the retirement age.

Corporate Democrats and many Republicans have settled on immigration as the primary solution to declining birth rates because it’s cheap — they don’t have to contribute money toward raising these workers. And they have been happy to leave immigrants in a legal twilight zone because it undermines workers’ power to organize, unionize, and vote.

Still, immigrant workers have been powerful constituencies pushing pro-labor victories. This tendency has created a desire on the Right to make up the baby deficit with domestic births, preferably Euro-Americans, who they hope can be induced to identify with their white exploiters. Texas and California both now have non-white majorities, due largely to immigration. In California, immigrant organizing has won better labor laws and business regulations, and doubled the federal minimum wage. In Texas, a right-wing legislature has only been able to stay in power through frantic gerrymandering and terrorizing immigrants.

Birth-rate promoting “Reformocons” (a dubious hybrid of “reform conservatives”) emerged ten years ago, including former House speaker Paul Ryan and Senators Marco Rubio and Mike Lee. They proposed meager increases in family-supporting programs to raise the birth rate and attract working-class families to the Republican party. But as Sweden and France could tell you, it takes a great deal of public expenditure to move the needle on birth rates.

In the United States, you would have to actually make working-class life a lot less hellish. And any program that makes workers even slightly less dependent on their jobs is anathema to the Reformocons’ corporate sponsors. Rubio continues to flog the idea that parents could get money from Social Security to support their kids. The poison kicker? It would be deducted from their retirement income.

Who Is the Enemy?

Heideman cites Kristin Luker’s study from the 1980s to argue that some working-class women oppose legal abortion because they perceive that abortion, and other feminist demands, devalue their work as mothers. But contraception, which prevents many more births than abortion, is wildly popular. Even among antiabortion women, 80 percent support access to contraceptives. The grassroots debate is not about reproductive control — we all want it. But that is the substance of the elite debate, which is about how to get us to bear and raise children with minimal government or corporate expenditure.

People who have religious or ethical objections to abortion have been enlisted as foot soldiers in a war that has its origins in the economic and political requirements of the corporate right. Success can be explained through the application of scads of church and corporate money.

You could only identify working-class women as the driver of antiabortion politics if you examine the question ahistorically. Governments (and the Catholic Church) cracked down on contraception and abortion as soon as women started to effectively control their reproduction. In the United States, the hammer came down federally in 1873, when Congress passed the anti–birth control Comstock law. The stated motivations ranged from providing population to expand the nation, to increasing Protestant births to outbreed Catholic immigrants, to the need to fill the military of an increasingly imperial state.

Today there are added concerns about the ratio of retired to working-age people and limited profit opportunities in the face of population declines. The last two worries have emerged because and labor victories mean capitalists have to put in money for our retirement, and feminist victories have given us more reproductive control.

Long before the Court’s ruling in Dobbs v. Jackson Women’s Health Organization, our birth rates were being forced higher by pronatal coercion: a quarter of births in the United States are from unintended pregnancies. US women have never had full abortion and contraceptive access because of cost. A clinic abortion costs $530 on average. By contrast, the Argentinian abortion law passed in 2020 says the state must provide you with one within ten days of your request.

Now abortion has been banned in several states and is expected to be banned in another dozen. And the Dobbs decision undermined Supreme Court rulings that forced states to permit contraceptive use among the married (Griswold v. Connecticut in 1965) and the unmarried (Eisenstadt v. Baird in 1972).

Heideman argues that our corporate overlords are neutral on abortion or may even favor abortion rights. He points to Amazon and other corporations that say they’ll cover abortion travel costs for some employees. But this only confirms that capitalists want their own workers to be unencumbered by childbearing, the better to get work out of them. It doesn’t mean Amazon’s owners have no long-term class interest in a non-shrinking US labor force.

Our ruling class, like ruling classes throughout history, cares intensely about how many kids we have and how much it will cost them. If we continue to think of the establishment as a neutral arbiter, and the abortion fight as a squabble between ordinary people, we’ll miss what is really at stake. The ruling class would love for us to fight among ourselves, leaving their exploitation of our reproductive work invisible. It’s our job to make it visible and a site of struggle, demanding not just free abortion and contraception, but also the resources we need to raise safe, healthy, and happy kids.