Home / News / Europe’s Central Bank Has a New Tool to Protect Bond Markets. When Will It Protect Workers? 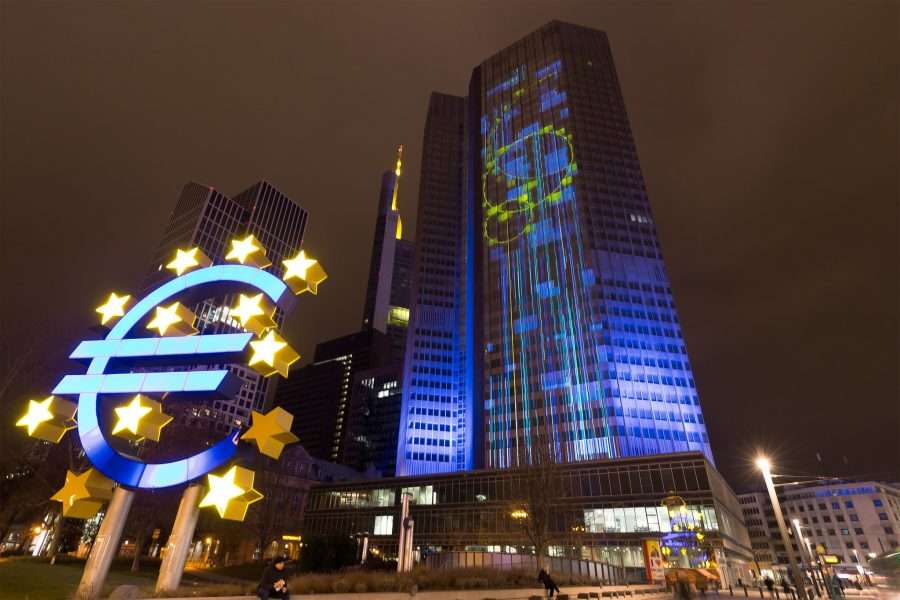 After its poor handling of the Eurozone debt crisis in the 2010s, the European Central Bank has created a mechanism to provide support to bondholders across the bloc, protecting creditors from the consequences of rate hikes. Workers will not be so lucky.

The European Central Bank (ECB) has a dilemma. With the Eurozone facing unprecedented inflation (8.6 percent in June), many on the Governing Council want to see a rapid and substantial rise in interest rates. But raising rates too much, or too quickly, risks destabilizing the euro by threatening the fiscal sustainability of the Eurozone’s most indebted countries. Italy, the European Union’s third-largest economy, is the chief concern.

Recent political turbulence there — culminating in the resignation of prime minister Mario Draghi — spooked investors in Italian sovereign debt. As a result, the spread — or the difference in yield — between Italian and German bonds rose to its highest level since the height of the COVID-19 crisis in 2020. Although Italian bonds have since recovered, further monetary tightening could easily cause spreads to widen again, leading to a speculative flight from the country’s debt.

In an attempt to square this circle, the ECB made a dual announcement late last month: it would hike rates by 0.5 percent, but it would also introduce a new instrument designed to contain the fallout of rate hikes in the bond markets — the so-called Transmission Protection Instrument (TPI). The TPI permits the central bank to buy up sovereign debt in unlimited quantities whenever it determines that a country is “experiencing a deterioration in financing conditions not warranted by country-specific fundamentals.”

In short, it allows the ECB to bail out any bond market that it deems to be struck by panic and “disorderly” selling. This may prove crucial for countries like Italy if further rate hikes lead to a downward spiral in bond prices. Employed judiciously, it could prevent the reoccurrence of another sovereign debt crisis like the one that devastated Europe in the early 2010s.

The European Central Bank’s Governing Council has belatedly recognized that allowing bond markets to collapse is, in fact, not good.

Deficit hawks in northern Europe promptly pounced on the new instrument. German ordoliberals panned it for “shielding [debtor] countries from both market forces and political commitments.” And Markus Kerber — the gadfly public finance professor whose most recent book criticized European COVID relief efforts as “fiscal suicide” for Germany — is already preparing to sue the ECB in German constitutional courts, calling the TPI “a blatant case of state financing.” The common thread here is that the TPI allows for de facto monetary financing of Southern European governments — that is, financing governments with newly created central bank money rather than forcing them to raise funds from private creditors.

Given the uproar on the fiscal right, those whose sympathies run in the other direction might be inclined to optimism about the ECB’s decision. To be sure, the central bank’s robust support of bond markets since the pandemic is a far cry from its market-based treatment of government debt during the 2010–12 crisis. Back then, the ECB opted to teach Southern European economies a lesson in fiscal discipline rather than decisively intervening to stabilize a “doom loop” in bond markets.

This was a major factor in — if not the primary cause of — the crisis. When crisis arrived again in 2020, however, the bank immediately announced it would do everything necessary to create liquidity and “supportive financing conditions” for Eurozone governments. Is the TPI, then, further evidence that the ECB has turned over a new leaf? That its governors are no longer willing to crash entire national economies to ensure the integrity of “market discipline”?

True, the ECB Governing Council has belatedly recognized that allowing bond markets to collapse is, in fact, not good. But this is hardly a sign that the central bankers are ready to support national governments in promoting vigorous and equitable growth. Rather, we should see the strengthening commitment to maintain “orderly markets” for what it is: a strategic concession that allows the bank to build the necessary support for monetary contraction.

The TPI, in other words, assures bondholders that their portfolios will not be subject to a speculative collapse as interest rates rise. With this safeguard in place, monetary tightening becomes a more palatable option. Christine Lagarde more or less admitted this in a recent press conference: only after the Governing Council unanimously agreed to support the TPI, she said, did it become politically possible to raise interest rates by 0.5 percent (rather than the 0.25 percent that had been announced a month earlier). With financial markets insulated from the most disruptive effects of monetary tightening, then, the ECB has a free hand to do what central banks have traditionally done in periods of inflation: throw people out of work until prices (especially the price of labor) start to cool off.

The use of “orderly markets” policy to appease the financial sector and build support for contractionary monetary policy may be relatively new in Europe, but it has a long history in the United States. During World War II, interest rates on US government securities were fixed across the board, with the Federal Reserve buying and selling bills, notes, and bonds at prices that were determined by the Treasury. When the war ended and wartime price controls on consumer goods were lifted, inflation broke out, peaking at nearly 20 percent. Still, the US banking lobby was extremely hesitant to endorse the (then novel) idea that the Federal Reserve should suppress inflation by increasing interest rates.

In 1948, the president of the American Bankers Association, Frank Rathje, encapsulated the prevailing opinion in the financial sector. Freeing the market for US Treasuries and allowing bonds to fall below par, he said, would “provoke a storm” among his constituency of financiers. Thus, any move to withdraw Federal Reserve support from the market would need to come with “a reasonable assurance to the many parties in interest that Government bonds would be salable in a free market at or near par.”

Ultimately, the Federal Reserve provided such an assurance with the Treasury–Federal Reserve Accord of 1951. This agreement, which ended the regime of pegged bond prices and gave the Federal Reserve the power to adjust interest rate policy without approval from the Treasury, is typically remembered as the origin of central bank independence. Usually left out of this story, however, is the fact that, both before and after the accord, Federal Reserve officials ran an extensive publicity campaign to assure the financial sector that its move away from fixed, stable interest rates would not mean a dangerously volatile “free market” in government securities. Rather, the Fed would guarantee an “orderly market,” in which bondholders would be protected against excessive volatility and speculative downturns. As Fed chair William McChesney Martin Jr put it, “[We] don’t intend to support prices of government bonds on a pin-point peg, nor let the market go completely on its own, without regard to orderly conditions.”

But if bond markets were insulated from tight monetary policy, labor markets were not so lucky. In the aftermath of the accord, the Fed was more concerned with disciplining an unruly labor movement than it was with rigorously pursuing its mandate to achieve maximum employment — especially after the United Auto Workers (UAW) won a series of historic contracts, complete with “escalator clauses” that linked wages to labor productivity and cost of living. In this environment, “maintaining price stability” became a euphemism for breaking the power of organized labor.

Decades later, when Paul Volcker raised interest rates to record highs — bringing US unemployment to the highest levels since the Great Depression and causing a cascade of financial crises in Latin America — he was careful to ensure that his ruthless monetary policy did not upset the market for US Treasuries. Under Volcker’s leadership, the New York Fed offered abundant liquidity support to government securities dealers through short-term repo loans on Treasury securities. And Volcker himself actively pursued policies that would bolster government security market liquidity by exempting repurchase agreements on Treasury bonds from the “automatic stay” rule (which froze repo collateral during bankruptcy proceedings). These measures helped ensure that the kind of financial panic he induced in Latin America would not afflict the US bond market.

This history shows us how unevenly monetary contraction falls on different strata of society. While financial markets are insulated, labor markets bear the brunt of dislocation, distress, and disorder. This is not only cruel; it is unnecessary. In the United States, there is at least some plausibility to the claim that inflation has been driven by excessive demand — which, according to conventional wisdom, should be reduced through interest rate hikes and unemployment. (The conventional wisdom is wrong, but set that aside for the moment.)

In Europe, however, even mainstream economists concede that tight labor markets and excess demand are not responsible for inflationary dynamics. Supply shocks, above all in energy, are clearly driving inflation there. And this is a problem that monetary contraction will not fix. How, one might ask, will making it more costly to borrow and putting the brakes on investment make oil and gas any cheaper?

Rather than forcing up unemployment, the ECB could tackle energy-driven inflation head-on, by working with national governments to accelerate decarbonization, which would reduce reliance on Russian oil. If it is concerned about disorderly conditions in financial markets, it could address the rampant speculation in commodity futures that was largely responsible for inflation in wheat prices earlier this year.

And if ECB officials care about debt sustainability in Southern Europe, they could stop insisting on the bankrupt idea that these countries must cut labor costs to improve competitiveness and boost output. (Italy — where inequality is increasing, wage growth has been stagnant for thirty years, and GDP per capita is lower today than it was twenty years ago — is a textbook example of how such neoliberal reforms have failed to produce the growth that was supposed to legitimate them.)

Today, eligibility to participate in the TPI is contingent upon the ECB’s judgment that a country is pursuing “sound and sustainable fiscal and macroeconomic policies,” which historically has meant fiscal retrenchment. What if instead it required reforms to strengthen labor protections, flatten inequality with the tax code, and generally contribute to a regime of wage-led growth?

Of course, we cannot count on the ECB Governing Council to do any of these things on their own. If there was a moment when it briefly seemed possible that the Christine Lagardes and Jerome Powells of the world could serve as strategic allies in the fight for an economy that empowers workers, that moment has passed. It is up to us now.