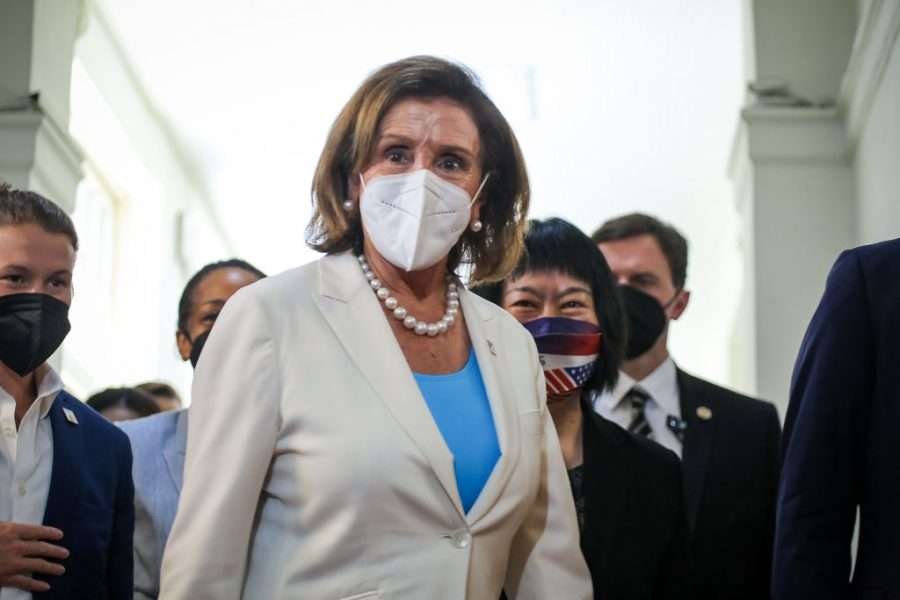 Nancy Pelosi is in Taiwan. The trip will accomplish nothing except ratcheting up tensions with one nuclear-armed superpower while the United States is already in a proxy war with another.

Speaker of the House Nancy Pelosi leaves the Legislative Yuan during her visit to Taiwan, August 3, 2022. (Annabelle Chih / Getty Images)

Nancy Pelosi visited Taiwan — a pointless trip that ratchets up tensions with one nuclear-armed superpower just as the United States finds itself knee-deep in a potentially catastrophic proxy war with another.

President Joe Biden is hardly a pacifist. But even he discouraged her from going, noting that the military thought it was a stupid risk. Hell, Thomas Friedman, a New York Times columnist who can generally be counted on to be recklessly enthusiastic about American military power, has described Pelosi’s visit as “dangerous and irresponsible” — arguing that “Taiwan will not be more secure or more prosperous as a result of this purely symbolic visit, and a lot of bad things could happen.”

Bringing the US and China Closer to the Brink

The United States has poured tens of billions of dollars into Ukraine’s war effort as well as being more directly involved in semi-covert operations to assassinate Russian generals and sink Russian ships. (I don’t know how “covert” an operation is if “intelligence sources” turn right around and brag about it to the New York Times.) Crucially, China so far has not provided similar assistance to its ally Russia — or at least not yet.

According to a “senior U.S. official” quoted by Friedman, President Biden and his national security advisor Jake Sullivan have held a “series of very tough meetings with China’s leadership” — including Biden personally threatening Chinese president Xi Jinping about the economic consequences of military assistance to Russia. So far, it’s worked.

But a calculated diplomatic provocation, like the Speaker of the House paying what looks suspiciously like a state visit to an island claimed by China as part of its territory, could provide fodder to anyone within the Chinese government arguing for a more hawkish posture toward the United States.

Really take a beat to let that part sink in. We’re already closer to the brink of World War III than we’ve been since the Cuban Missile Crisis. The prospect of a third major power being added to a hot war is disturbing. And that’s not even close to the worst-case scenario from increased US-China tensions.

In response to Pelosi’s visit, China has announced live-fire drills that include coordinates within ten miles of Taiwan’s coast — a direct challenge to Taiwanese sovereignty. (China conducted similar drills during another standoff twenty-six years ago, but these are aimed much closer to Taiwan’s coast.) While the probability of an all-out war between China and Taiwan is still low, there’s no doubt that Pelosi has raised that probability — a few months after Joe Biden recklessly abandoned the long-term American posture of “strategic ambiguity” about what the United States would do in such a war.

“They Didn’t Say Anything When the Men Came”

In Taiwan, Pelosi suggested that China’s reaction to her deliberate diplomatic provocation reflects a sexist double standard. Referring to a visit in April from Lindsey Graham and several other senators, Pelosi said that China “didn’t say anything when the men came.”

This is a nonsensical defense for at least two reasons. First, Pelosi seems to have forgotten that the Speaker of the House, being constitutionally in the line of succession to the presidency, has always been regarded by foreign governments as an official representative of the United States in a way that rank-and-file senators are not. Second, China did say something about these senatorial visits, officially warning the United States that it was “going down a dangerous path.”

This is the first time an American of Pelosi’s rank has visited the country since then speaker Newt Gingrich went there in 1997. And as Michael Swaine of the Quincy Institute for Responsible Statecraft explained on Democracy Now, even citing that apparent precedent for Pelosi’s trip is misleading.

She flew over to Taiwan on an official US military jet that looked like Air Force One. She described her visit in Taiwan as an official visit. She publicized it in a very major way. Unlike Newt Gingrich, who went as Speaker of the House twenty-five years ago to Taiwan — Newt Gingrich went to Beijing first, he stopped in Taiwan very briefly and then moved on, the Chinese didn’t like it then, but now what Pelosi has done is much larger scale than this, much higher publicity, much more of the trappings of an official visit, and that really is a basic violation of the understanding that the United States and China reached at the time of normalization.

That understanding was that, on the Chinese side, Beijing wouldn’t surrender its territorial claim to Taiwan or disclaim its right to use force within what it considers to be its sovereign territory, but, implicitly, it would focus on a long-term pursuit of peaceful unification. On the US side, Washington would accept Beijing’s claim that there was only “One China” but refrain from adjudicating which government — Beijing’s or Taipei’s — had the valid claim to sovereignty over it. Meanwhile, it would reserve the right to arm Taiwan for the purpose of self-defense. That awkward compromise has sometimes felt very shaky. But it’s kept the peace for decades.

Taiwan was a right-wing, one-party state until the 1990s. The process of democratization went along with the rise of the Taiwanese labor movement and the development of a relatively generous welfare state, and the country is now a real multiparty democracy. While a handful of eccentrics on the margins of the western Left may believe there should be no objection to China reintegrating Taiwan by force, against the will of the overwhelming majority of people who live there, most of those raising concerns about the potentially catastrophic consequences of increased US-China tensions take it as a given that that, too, would be a disastrous outcome.

As with Russia’s war in Ukraine, we should be able to distinguish between two very different questions. The first is whether the actions of a rival power are morally justifiable. The second is what role US policy might play in making those actions more or less likely to happen. I’m old enough to remember a time when Chomskyite critics of American foreign policy were accused of being apologists for al-Qaeda when they suggested that American actions in the Middle East helped to fuel terrorism. Anyone who can understand the flaw in that reasoning should be able to understand what’s wrong with accusing contemporary advocates of de-escalation of being apologists for Vladimir Putin or Xi Jinping.

The Taiwanese people deserve to be left in peace. This is one of many excellent reasons to dial down great-power tensions. A good start would be for the Biden administration to say no the next time Nancy Pelosi asks to use a military jet.