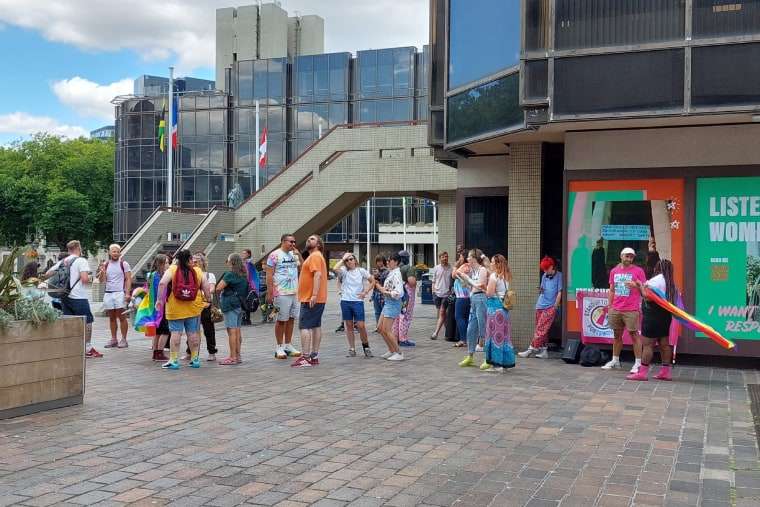 Counter-protest to push back the far right bigots outside Portsmouth library (Picture: Stand Up To Racism)

Supporters of Stand Up To Racism (SUTR) are mobilising in several towns and cities, including Leeds on Saturday.

Drag Queen Story Hour with drag queen Aida H Dee are story-telling sessions for parents and children. But the far right wants to shut them down. This includes the fascist party Patriotic Alternative—led by Mark Collett, the former leader of the Nazi British National Party’s youth wing,

SUTR said, “We condemn the attempts by some on the far-right to foster the pernicious myth that drag is a kind of ‘child grooming’ or in some way sexual, leading to accusations of paedophilia.”

Aida H Dee said her performances aimed at 3–11-year-olds have no sexual language. It comes as a survey by Just Like Us showed that 55 percent of LGBT+ 11 to 18-year-olds are anxious about their mental health on a daily basis. In comparison, 26 percent of non-LGBT+ people feel the same.

Three confrontations took place in Brighton on Thursday. Steve Guy, a local socialist activist, reports that some 150 to 180 supporters of the drag queen faced off around 35 opponents at the central library.

They were armed with video cameras and broadcasting equipment, with around eight outright fascists among them. The rest were a mix of conspiracy theorists, religious activists and anti-vaxxers, including Piers Corbyn “whipping them up to provoke violence”.

“There were clashes, but because of the numbers they were containable,” Steve said. “When the parents finally emerged from the reading session, we cheered and applauded them.”

Some SUTR and trades council banners joined the counter-protests. “But the majority of the pro-drag queen forces were young and committed,” Steve says. “The second confrontation at Hove library was a slightly less well-attended affair, on their side as well as ours,” he added. “There was a noticeable absence of hardcore Nazis.

“But the narrow pavement which we shared with them, meant that intermingling was inevitable. When the clashes came there were two arrests.” This included one from each side.

A library in Woodingdean outside of Brighton cancelled the event as the bigots intercepted the drag queen, harassing her.

Steve says overall the counter-mobilisations were a success “as without it the right wing would have succeeded in intimidating the parents attending these events”.

“It’s clear that the bigotry expressed in the Tory leadership contest is giving confidence to the far right to go on the attack,” he said.

“Stand Up To Racism stands with LGBT+ communities and will be helping to build support events in coming weeks to oppose attempts to intimidate children, parents and LGBT+ people.”

Join anti-racist and anti-fascist groups on solidarity protests, in Leeds on Saturday, Vale of Glamorgan in South Wales next Tuesday, Cardiff on next Friday August, Rochdale on 16 August, Bolton on 17 August and Oxford on 23 August.