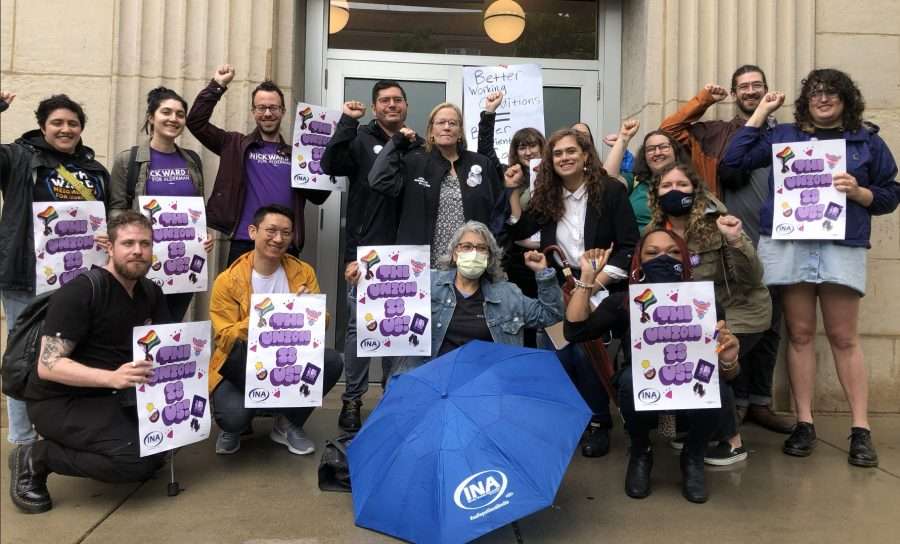 Workers at the Chicago nonprofit LGBTQ health provider Howard Brown say management has not prioritized what’s best for either patients or workers — and that they’re organizing a union to change that.

Since December 2021, workers at Howard Brown Health, a nonprofit LGBTQ health care provider in Chicago, have been organizing with the Illinois Nurses Association (INA). Around 475 employees are currently voting on whether to form a union, and ballots will be counted on August 9. Nurses at the facility already voted to join the INA in 2019.

Brynn Schaal spoke with TiJuan Flemming, a former behavioral health provider who left Howard Brown in June, and Rose Sawyer, a trans and gender-nonconforming youth hormone navigator who is also part of the union organizing committee.

What are your primary motivations for organizing?

Right now, Howard Brown has a budget deficit, and they are experiencing very high turnover. For the people still there, job roles are expanding but pay is not. The goal is to be paid fairly and hopefully get more people hired. On the behavioral team that I previously worked on, we realized more people were not going to be hired, so if we were ever going to get resources and better pay, better benefits, a union was the best way to go.

Pay has been a big part. It’s supposed to be standardized in some way through internal and external audits, and there seems to be some discrepancy in what people are getting paid. At the lowest end, we’ve got folks being paid near minimum wage.

A lot of folks are motivated by retaliation. That’s something that a lot of people here have faced from management for speaking out, or for advocating for patients and their programs. A lot of folks want more of a seat at the table at this organization. There’s not a clear way to communicate with the people at the top, and the folks at the top tend to be pretty isolated from what’s happening at the ground level in our clinics, in our thrift shops [owned by Howard Brown], and administrative buildings — the bosses don’t really know what we’re doing and why we’re doing it, and they’re making decisions based on their interests and not the interests of their workers and patients.

We can’t provide what our patients deserve unless we’re also taken care of.

A lot of people who work here are working in their own community and are members of the community that we’re serving. A lot of us come to Howard Brown for our own health care. We know this organization is failing to live up to its mission. We as workers want to be protected and compensated and taken care of. We can’t provide what our patients deserve unless we’re also taken care of.

Do you have experience being in a union or organizing prior to this?

I had been in a union when I was in college, but I really had not paid that much attention to it. I worked at Howard Brown for a short period. That’s how rough it is there now. And there’s the pressure campaign for people to either quit or be fired. And the team shared with me today that it looks like [management] would rather have people quit than be fired.

This is the first time I’ve ever done anything related to a union, so I personally don’t have anything to compare it to. This campaign started at the end of 2021, when the Omicron surge was happening in Chicago; that was also about the time Howard Brown announced they were going to be following a five-day quarantine for COVID. So many of our coworkers were catching COVID and were out sick. They have never given us hazard pay through the pandemic. Nurses may be in a different situation because they have a union contract.

Howard Brown’s justification was that they eliminate hazards through personal protective equipment, and they had no proof that people had gotten COVID from work. Our executive leadership held these Q and A sessions that were in our work chat. People were really fired up and brought these issues directly to our executive leadership, raking them over the coals for how they’ve handled COVID, hazard pay, PPE, employee safety. Which I think was a really animating force: we all saw that and thought, here’s a ton of people who will probably be interested in a union. It just kind of took off like wildfire.

What has the response been from management?

Thus far they’ve been, on the whole, pretty nice. They’ve been using the carrot more than the stick. Most of their anti-union activity has been more on the nice side — like free lunches, and all of a sudden we’re getting a little pay bump. There have been a couple notable cases of folks facing retaliation for being vocal union supporters.

There’s a very frustrating balance of being forced to be loud and insistent on what you need and what your patients need, and also being terrified that if you’re too loud, they’re going to fire you because you’ve been a problem.

What changes do you believe unionizing will create within your profession?

It’s the people on the ground across the organization who actually know how this place runs. The bosses don’t always have the best sense. I want us to be able to wield that power and get a lot more out of this organization for the people we serve.

I look to the Chicago Teachers Union and the way they’ve been able to use their power not just to fight for themselves but to say, we need more social workers, we need more nurses in our schools — we need these things to actually support our students. Staffing ratios [the ratio of patients to health care workers], especially with COVID, are really atrocious, and have gotten really bad at Howard Brown right now. It’s really hard to work here in a sustainable way, and our community suffers for it.

I remember when quarantine was first hitting, Howard Brown had no plan internally. Even a week before lockdowns hit Chicago, we’d have folks walking into the clinic saying, “I was exposed to COVID,” and we didn’t have a plan. It was very disorganized. When COVID hit, we went pretty hard into COVID testing — that became one of the primary focuses of our clinics. We did a lot of testing across the city. There were at least some pretty coherent guidelines of who was going to be working in person, who was going to be working remote.

I think over the past year, there has been a push to get people back in the clinics, regardless of whether they need to be there. There have been a lot of decisions made around COVID policies and protocols that I don’t agree with. Howard Brown adopted the five-day COVID quarantine rule pretty much the second that it was released by the CDC, which I don’t think is a good idea, especially when you’re working in a health clinic. But they’ve been pretty adamant that that is the standard we’re going to follow. When it comes to COVID sick time, you only get five days, and if you need more, you need to use your own personal sick time, which puts a lot of people in a bind.

The nurses have been unbelievably supportive. They were some of the first folks we talked to about the union because, in the early days, I personally knew a couple of the nurses and knew they were safe people to talk to because they already had a union and were very vocal about it. [The nurses have] been talking with our coworkers, and it’s been really helpful having people who already have a union and can speak to why a union is good and who can say, “The reason that I’m so outspoken at work is because I have the union protection, and if I didn’t, I would’ve been fired years ago.”

What advice do you have for people working in the nonprofit sector who are thinking about organizing their workplaces?

Just organize. Get it done as quickly as possible.

The folks who are drawn to nonprofit work tend to be quite radical. I think this is a moment we need to capitalize on. A lot of people want this, especially people in nonprofits.

A nonprofit has an image to uphold. That can be an incredibly powerful tool for workers.

Organizing in COVID, when people tend to be really spread out, has added a lot of unique challenges to this work. There’s a lot of limitations, but I feel like our campaign has found a lot of utility in being able to just email everyone at the organization and be like, here’s our union updates, or go in our all-staff work chat and talk about the union directly with people and send them a link to the electronic union card. We’ve taken this difficult thing, organizing during COVID, and thought about how we can use some of these systems that have been built because of COVID to our advantage.

Nonprofits have low union membership. While this is true with most sectors of the American economy, this sticks out because a lot of nonprofits preach social justice and progressive politics. What do you believe accounts for this disparity?

For Howard Brown in particular, it’s because [the nonprofit] is a progressive political darling. It has been difficult for people working there to stand up for themselves.

I’m deeply critical of nonprofits and the nonprofit-industrial complex. I think that we do good work. But these organizations are not actually structured in a way that allows for serious, transformative change. And on the worker side of things, a place like Howard Brown feeds off the energy of young, enthusiastic, idealistic queer people, feeds off of their radical energy and radical politics, yet is oftentimes just as exploitative as any other workplace.

While obviously a nonprofit structure is different from a for-profit structure, they’re still trying to minimize how much power or money they give to their workers. And I think a lot of the folks at the top are not interested in significant change, transformative change — it would negatively impact their goal of running a nonprofit that thrives off of broken systems. They don’t necessarily want to fix things, and they want to get the most out of their workers while giving them the least, just like any other business organization.

Some of the power with organizing within nonprofits is that, more than a place like Starbucks or Amazon, a nonprofit has an image to uphold, especially a nonprofit enmeshed within a community. They want people to think they’re good in some abstract way. That can be an incredibly powerful tool. Something that has been really useful for us is to be really public and say to the community that this place is not living up to its ideals for you or for me, and we have to hold them to it.