Home / News / Rage against the Tories at Eastbourne leadership hustings 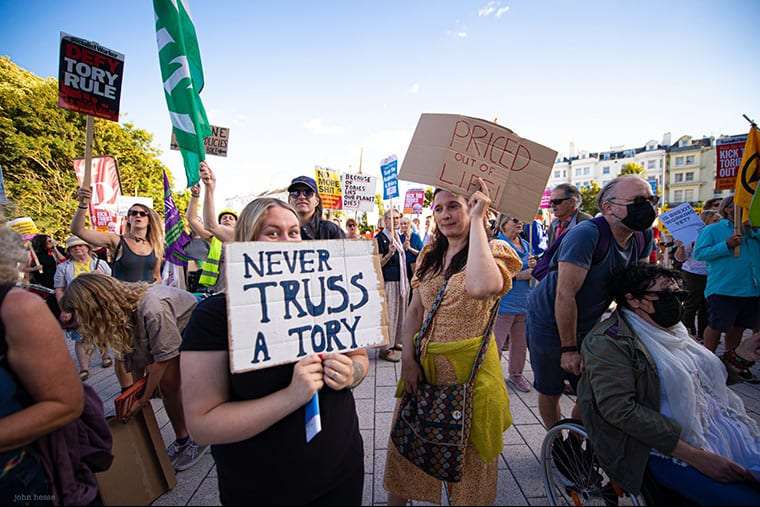 Over 200 protesters confronted the Rishi Sunak-Liz Truss hustings roadshow on Friday in the Sussex coastal town of Eastbourne.

Speaking to camera outside the venue a bemused-sounding BBC journalist struggled to be heard above chants of “Tories out” and “Refugees welcome here”.  “It seems that every protester in East Sussex is here,” he said.

Meanwhile inside the event half a dozen young people from Green New Deal Rising and Just Stop Oil had blagged their way into the Centre to successfully disrupt the event to call for climate action.  Typically rather than address the climate emergency Liz Truss vowed to crack down on protests and strikes.

Local protesters had gathered at Eastbourne station to welcome groups arriving from Hastings, Lewes, Brighton, Newhaven and Seaford. Then they marched to the hustings venue behind the East Sussex RMT Coastway union banner.

Eastbourne Trades Council and Eastbourne Stand up to Racism (SUTR) initiated the protest. Organiser Louise Walton from SUTR said, “Once we called the protest we immediately reached out to environmental groups and refugee support groups across East Sussex including Extinction Rebellion (XR) groups and the local Bespoke campaign which fights for improved cycle facilities in the town.

“We didn’t wait until the venue was known before putting the call out.”

Rachael from the local XR group said “Some good connections were made with different groups. Working together is how we win!”

Chelsea heard about the protest from a friend. She said “I went straight to the Welcome Centre, the hustings venue. There was just me and small groups of right-wing people. I felt very alone but then I heard the protest coming round the corner. What a wonderful sight. I wasn’t on my own anymore.”

When the march arrived at the centre protesters took over the concourse which was the entry point to the hustings. They drowned out and sidelined small numbers of conspiracy theorists and UKIP supporters.

Tories attending the event had no choice but to make their way past the protest while the crowd chanted “Welcome every refugee, throw the Tories in the sea”, “Sunak, Truss hear us say—tax the rich and make them pay” and “What do we want? Climate justice.”

At one point a visibly shaken Caroline Ansell, the local Tory MP, emerged to remonstrate with police saying “this is unacceptable”.

After an hour or so of chanting, protesters held a short rally. Keith Mitchell from the RMT received a rousing reception and warned of Tory plans to outlaw effective strike action. Other speakers condemned the government’s Rwanda deportation policy and the support of both candidates for fracking.