Home / News / Striking back against the Tories 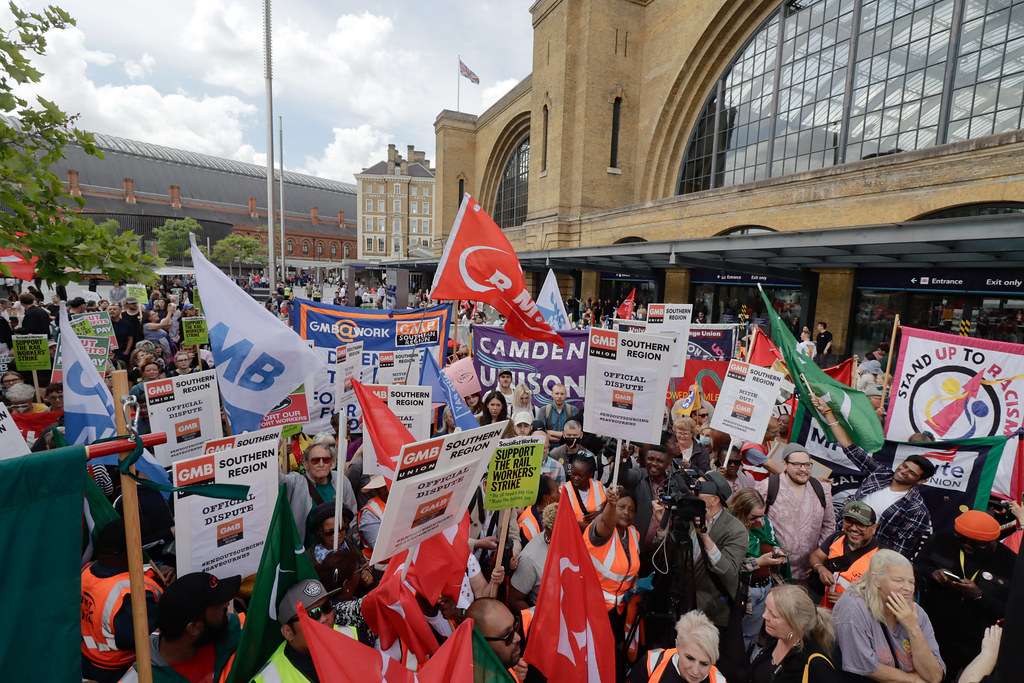 As the cost-of-living crisis intensifies, we are seeing more and more strikes with workers both resisting attacks on services, terms and conditions, and pressing for higher wages. Jonny Jones analyses the recent strike wave and looks at how we can intensify the struggle.

In the Communist Manifesto, Marx and Engels described the class struggle as a constant but uneven process – ‘an uninterrupted, now hidden, now open fight’. In terms of the workplace side of that struggle, things have certainly opened up in recent months, with industrial action and strikes are back on the agenda in Britain in a big way.

It’s hard to provide precise figures for the extent of strike action, in part because of the selectivity and sporadic nature of official strike number reporting by the Office for National Statistics – who simply stopped collecting data during the early part of the pandemic in 2020. However, research for rs21 by Ian Allinson earlier this year indicated a trend of increasing numbers of strike votes in 2021, as well as a shift in character towards disputes over pay. The Guardian reported in April that the GMB had entered 42 disputes between October 2021 and March 2022, a seven-fold increase on the same period in 2019-20, while Unite were engaged in 30 disputes, an almost four-fold increase on three years previous.

This is a big change since the pandemic, when fire-and-rehire tactics led to major defeats in a number of industries, most notably British Gas, and the government forced public sector workers to accept insulting pay deals. Even during the pandemic, though, we began to see encouraging signs of workers taking advantage of labour shortages in sectors such as hospitality to bargain up their rates of pay. As the economy has gradually opened back up since then, the labour market has continued to tighten, and there are now more job vacancies than unemployed people, giving workers potentially greater leverage over their employers.

Today, strikes have become a part of the national media discourse in a way we have not seen in a long time. Much of this is due to the strikes by members of the RMT union, reportedly the biggest in 30 years, which have caused massive shutdowns of the rail network. This alone would have been big news, but the intervention of the RMT’s general secretary Mick Lynch has amplified the effect of the actions. His patient and stoic media appearances have not only discombobulated interviewers but also hammered home a simple point, again and again, to the public: there is a cost-of-living crisis because bosses are making big profits at workers’ expense, and we should fight for a pay rise.

Since then, CWU members working for Openreach and BT, including engineers and call centre staff, struck for two days in the first national BT strike for 35 years and the first ever national call centre strike. The CWU also announced a whopping 96.7 percent for action in the Royal Mail on a 77 percent turnout and a second national ballot over workplace changes.

This is in addition to ongoing disputes among barristers, refuse workers, university teachers and professional services staff, and bus drivers. We have also seen a spate of new ballots announced, of teachers, university workers, college workers, civil servants, nurses, NHS workers, and others.

In response to this, we have seen the reheating of anti-union rhetoric by the Tories. Not only has the government signed the ‘scabs charter’, changing the law to allow agency workers to break strikes, but Liz Truss, running to replace Boris Johnson as Tory leader and prime minister, has said that she will push through the new raft of anti-union laws that had been threatened in the 2019 Tory manifesto. A spokesperson justified this by saying that

For too long, trade unionists have been able to hold the country to ransom with the threat of industrial action. The steps she has announced today will finally allow the government to take back control from trade union barons and deliver the economic growth we need to put money back in hardworking families’ pockets.

In the figure of the ‘union barons’ and the hordes of hijacking trade unionists, the Tories hope to pin human faces on ‘the enemy within’, allowing the ‘anti-communism without communism’ identified by Richard Seymour to take on a more concrete and traditional form.

The Tories have a problem, though. The RMT strikes actually became more popular as they went on. Polling by Opinium found that 45 percent of people supported them, against 37 percent who were opposed, a direct reversal of the figures a week earlier. Some 70 percent wanted rail workers to get a pay rise that reflected the rising cost of living. After years of falling wages and now sharply increasing prices, it is much more difficult for the Tories to pin the blame for the crisis on anyone other than the government that has been in power for over 12 years, hence the savage infighting now dominating the leadership campaign.

If this picture looks promising for our side, there is, of course, a downside in the leadership of the Labour Party. Under Keir Starmer, Labour has consistently dodged appeals for support for strikes. Starmer banned shadow ministers from visiting the RMT picket lines – though a few disobeyed – and Labour spokespeople consistently refuse to openly back the strikes. Starmer is struggling to enforce discipline, however. While Sam Tarry, a shadow transport minister from the party’s soft left, was sacked for visiting pickets, Lisa Nandy, the shadow secretary for levelling up, was able to get away with her visit to CWU picket lines in Wigan.

Labour’s pitch at the moment is as a ‘safe pair of hands’ for the ruling class. They won’t rock the boat, they’ll make sure that disputes are negotiated properly, and they’ll be able to more effectively mediate between bosses and workers to get the economy growing. So shadow chancellor Rachel Reeves says that nationalisation of rail, energy and water ‘just doesn’t stack up against our fiscal rules’, while Starmer refuses to commit to supporting a pay rise for workers in line with inflation. As one Labour spokesperson said

Keir’s Labour party is on the side of the public, and our decisions are driven by that. Not everyone will like it, and we’re prepared for that, but that’s how we’ll prove ourselves as a serious operation, a serious government in waiting, and is how we’ll win elections.

None of this should be surprising. This is the default mode of the Labour Party, with Corbyn’s brief period in the leadership being the exception rather than the rule. Yet, one of the legacies of Corbynism is a wide layer of people in society, some in the Labour Party but many more not, who see themselves as socialists and who are instinctively supportive of strike action. While the internecine warfare going on inside the Labour Party could prove a distraction, we have recently seen a significant wave of solidarity for the strikes, with large delegations visiting the picket lines.

In figures such as Mick Lynch and Sharon Graham, we have union leaders who are up for a fight. They join others who have been stalwarts of the left for many years. It matters when they give a lead and when they are prepared to call out the Labour leadership. Lynch has responded to the Tory’s proposed anti-union legislation, which includes mandating ‘minimum service levels’ in every industry that could effectively outlaw effective strike action, by saying ‘there will be the biggest resistance mounted by the entire trade union movement, rivalling the General Strike of 1926, the Suffragettes and Chartism.’ CWU leader Dave Ward told pickets at BT Tower that he and other union leaders want to call action that all workers in Britain can take part in.

Raising the spectre of a general strike can sometimes be used to kick action into the long grass. But right now, there is a growing mood amongst those engaged in action to link up the fights and coordinate action. We know that not all trade union leaders would share the positions of Lynch, Graham and Ward. Indeed, even the most radical union leaders can find themselves set between bosses and workers ways that can and do lead to too-hasty compromises. That’s one reason we need to be why we need to be echoing calls for nationwide resistance with agitation for escalating and coordinated action in as many disputes as possible.

It is always difficult to predict the dynamics of any strike wave. They may grow and pull in more supporters and participants; they may decline, going down to defeat or to shoddy deals. The important thing to remember is that the outcomes are not predetermined; what we do now matters. In our workplaces we need to get organised. We should agitate for action where we can, but almost everywhere we can begin to take collections for strikers and arrange visits to picket lines.

In every campaign we can start thinking about how we can link up with groups of workers heading into action, like climate activists who joined the RMT picket lines, saying ““I’m proud to stand with trade unions because I know that together our collective power can take on the crisis we face in our cost of living, climate and our democracy.”

We should be arguing that pay increases must exceed and keep pace with inflation – anything less is a pay cut – and that we should reject any deal that doesn’t match it. Doing so doesn’t just build pressure on and strengthen the resolve of union negotiators; it also helps us to build our confidence and organising capacity.

In circumstances where the union leadership presents an obstacle to action, we should try to find creative ways of getting around them. Recently, UCU members who voted to take part in a marking boycott in a minority of branches were eventually able to bypass the union’s national leadership and win significant concessions from their employers in local negotiations several branches.

Marx and Engels wrote the Communist Manifesto in the aftermath of the failed revolutions of 1848, as Britain entered a downturn in class conflict that lasted for almost 40 years. We have gone through a downturn that has lasted even longer, and we don’t yet know where this one is headed. What we do know is that the increased visibility and popularity of strike action is opening a door for socialists to push at. Let’s all push together and break it down.