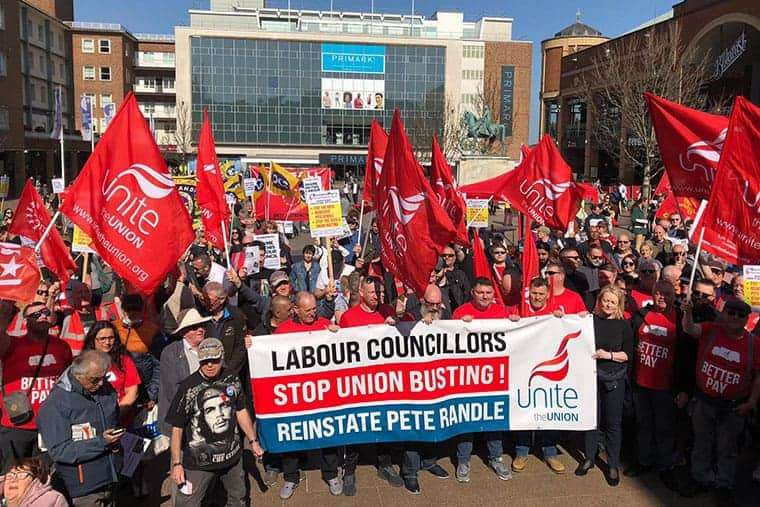 As Keir Starmer responds to a rising tide of strikes by accelerating his shift to the right, trade unionists and even party members are increasingly turning their back on him too.

For workers and union activists, Starmer’s demands that leading MPs stay away from picket lines—and his refusal to back above inflation pay rises—is a betrayal. Meanwhile, many Labour members, and those who have recently left, question what the party is even for.

For HGV2 drivers in Coventry, their eight month strike against the Labour council was a sign of things to come. While they fought for—and eventually won—a pay rise, the Labour council, backed by Starmer, set out to break them.

“We had the door slammed squarely in our face by the council who made up lies, suspended our rep and provided scab labour,” Unite union convenor Haydn Jones told Socialist Worker. “The intention was to intimidate and bully us to show they have the capability to make other strikers fall in line.

“Labour needs to hang its head in shame—it’s a party of despair for workers and it will never be united. Anybody that says Labour is there to represent working people is absolutely delusional.”

Haydn ripped his Labour ­membership up on the picket line. None of the 73 strikers were members by the end of the dispute. He thinks Starmer wants to prove that Labour is not a party that represents workers or unions.

“I’ll never forget eight months of being sneered at by Starmer,” he said—pointing to how Starmer laughed at the idea that Unite could cut its ­funding for the party over the dispute.

Labour MPs were cautious about joining Coventry’s picket line, including the left wing Zarah Sultana. “She chose to be a Labour MP rather than standing up for our rights,” Haydn said.

“They don’t stand by their convictions. For me there’s little or no hope for the Labour Party. That’s been demonstrated by the vicious barrage of lies and attacks on us.”

Haydn added that Starmer is “forgetting how Labour was set up through subs and donations of workers.” “It takes millions from hard working people through union affiliation fees,” he said.

“Unite must disaffiliate from Labour and there’s a strong urge for this. No more payments should go to Labour.”

Labour activists are also starting to question whether the party deserves their money and support. Alex joined the Labour Party just before the 2017 general election, encouraged by previous leader Jeremy Corbyn’s promise to abolish student debt.

“I joined because it was not just about being against the Tories, it felt like something I could actually get behind,” he told Socialist Worker. Yet Alex’s enthusiasm started to dip as the Labour right attacked and defeated Corbyn’s leadership in the run up to the 2019 general election.

When Starmer replaced Corbyn and the pandemic hit, Alex let his membership expire. “Going into the Covid lockdowns Starmer backed up the Tories,” he said. “Meanwhile capitalism collapsed in on itself and couldn’t cope without being backed up by workers—that radicalised me.”

Is an alternative possible—and what would it have to do to be different?

For the thousands—or tens of thousands—who’ve left Labour under Starmer, the big question is what fills the gap, and where to place their activity. Many feel that an alternative party to Labour—one that matches what they hoped for under Jeremy Corbyn—would be a step forward.

Haydn has called on Labour’s left MPs to quit the party and join a new parliamentary organisation representing workers. “We need a new party that believes in socialism to make things fair and equal for all,” he said. “We need to gather around people such as Corbyn.

“And we need a majority within parliament to change rules. I think a socialist government could run the country quite successfully, and they would have to make people pay their fair share.”

With the funding pulled from Labour, Haydn says this should go towards sponsoring Unite members and socialist councillors. “Starmer has changed the rules so much that it’d be impossible to get anyone that resembles Corbyn in,” he said.

“But we have two years to do something.” He added, “We need a process—that I hope isn’t too slow—of getting socialist councillors elected then supporting them as MPs.”

Yet even a new party would face the same difficulties as Labour under Corbyn. His MPs didn’t rebel against him simply because they were right wing. It was because they hated that his leadership didn’t look like what they call a “responsible party of government.”

That’s a party that promises to manage the economy and the British state in a way that ensures bosses’ profits. So Labour MPs pushed Corbyn into compromise.

The experience dispirited many activists such as Alex. “There was such fundamental contrast in the party that meant Corbyn couldn’t put his platform forward,” Alex said.

“It showed me even if he was in power, Corbyn would’ve had to compromise. Not even because of public pressure, but because his own party would’ve imploded.”

Constant compromise isn’t just the great failure of Labour—it’s the nature of parliamentary politics to fall into the demands of the right and big business. A new party would have to face up to that challenge, as well as the pressure to fall in behind Labour in parliament against the Tories.

Any alternative mustn’t simply try to repeat the Corbyn project—but build a new one that puts the power of struggle and resistance, not parliament, at its heart.