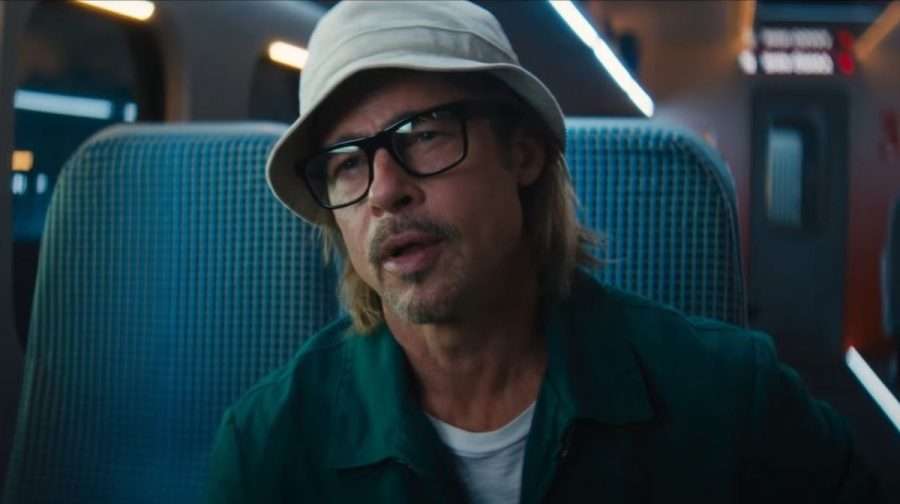 If you know you want to see Brad Pitt’s Bullet Train, for whatever reason, I wouldn’t recommend paying full price. It’s a matinee type of movie at best. In fact, it’s probably more a movie you wait to see on television. That’s because it isn’t very good, of course, though an action comedy that’s shiny and leaves no mark on the memory has its uses in these hard times.

The first trailers for Bullet Train actually made the movie look a lot better than it turned out to be, but that’s because so often there are impressive editors working to cut previews, making them zip along with wonderful kinetic energy that the films themselves lack. It’s a shame, really, because director David Leitch has done excellent work in the action genre in the past. He came up as a noted stuntman and stunt choreographer, and was in fact Brad Pitt’s own stuntman for several films, including Fight Club (1999) and The Mexican (2001). He codirected the first John Wick (2014) and has continued as a producer of that wildly successful franchise, along with directing other action films such as Atomic Blonde (2017).

Though it’s the “working very hard” part that backfires as a characteristic of the whole film, which seems strenuous and leaden, clogged with narrative tangents and awkward attempts to be funny or clever. Perhaps Leitch has made too much of a study of the early films of Guy Ritchie and Quentin Tarantino, with their abrupt flashbacks amid mayhem, supplying dark comic biographical details of stone-cold killers. Though oddly enough, Leitch claims as his main inspirations the films of Buster Keaton, Jackie Chan, and the Coen brothers, which nearly made me spit up my coffee when I read the interview.

Bullet Train, based on the 2010 novel Maria Beetle by popular and prolific Japanese crime-fiction writer Kōtarō Isaka, is about one of those top assassins that fill our screens these days, this one code-named “Ladybug” (Brad Pitt), who’s back on the job after a long period in therapy trying to work on his issues. “I’m just not that guy anymore,” he insists via cellphone to his handler Maria Beetle (Sandra Bullock). She calmly responds, “I think you’ve forgotten what you do for a living.”

I wanted to see the movie in part because of my fondness for any narrative that represents job burnout. It’s hard not to identify with such characters as they reach desperately for self-improvement remedies like intensive therapy, yoga, New Age spirituality, and wellness-industry nonsense. Such narratives are painfully funny when the poor fried character tries to unite their newly acquired “enlightened” ideas with the ideological horror of the old job, unable to accept that the two can never be joined. There was a great Mike White television series called Enlightened that was all about that.

Brad Pitt’s Ladybug is that character in Bullet Train. In order to continue to bask in his feelings of peace, love, and understanding, Ladybug requests the simplest possible job, the recovery and delivery of a silver briefcase full of money. He’s constantly repeating live-your-best-life nostrums in the midst of violent confrontations, to no avail, such as “When you point the finger at someone else, there are always four fingers pointed back at you. Oh, wait, there are only three fingers. Well, that’s weird.”

Ladybug refuses to even take a gun along, hoping to avoid inflicting violence on anyone, which he’s often done even without intending to because, in his view, he suffers from the most spectacular bad luck while on the job. His bad luck holds when he boards a high-speed train in Tokyo, headed for Kyoto, not realizing that there are a number of sociopathic professional killers on the train with him, all vying for the briefcase or working some sinister angle of their own.

These include a pair of British assassins who grew up together and consider themselves brothers, and are called “the twins,” though Tangerine (Aaron Taylor-Johnson) is white and Lemon (Brian Tyree Henry) is black. They bicker and screw up and blame each other while trying to fulfill a commission by White Death (Michael Shannon), the Russian leader of the world’s largest criminal operation, to recover both his hapless kidnapped son (Logan Lerman) and the ransom money in the silver briefcase. Yuichi Kimura (Andrew Koji), a Japanese member of a yakuza family, seeks revenge for the attempted murder of his son now lying in a hospital — if he can discover which of the assassins on the train is responsible. His father, “The Elder” (Hiroyuki Sanada), comes to his aid later in the film with a vengeance agenda of his own. The Wolf (Benito Antonio Martínez Ocasio aka Bad Bunny, the Puerto Rican rapper-reggaeton star) is a Mexican assassin seeking to avenge the murder by poison of his bride and entire wedding party (a direct lift from Kill Bill). The Hornet (Zazie Beetz) is an American assassin who specializes in exotic poisons. And Joey King plays the Prince, a mysterious figure disguised as a British schoolgirl in an innocent, all-pink outfit whose agenda is unknown.

As if that weren’t enough, there are star cameos by Ryan Reynolds and Channing Tatum that don’t have any impact. The Tatum bit, for example, is a one-note attempt at an unfunny sex tourism joke that is repeated twice and then just disappears, with no indication of what happened to the character after it’s announced that there are no longer any regular passengers on the train — just assassins. But a sloppy sense of too-many-bits-with-no-payoff is characteristic of the movie, in a way that Buster Keaton, Jackie Chan, and the Coen brothers would never have stood for. For example, there’s a recurring interaction with a ticket taker plaguing Ladybug, who lost his ticket before he got aboard, that could really have been built up into a worthwhile motif, because there’s something very human and funny about a character in constant danger of being killed who’s nevertheless afraid of being confronted by the ticket taker. Alfred Hitchcock would’ve reveled in it. But that recurring bit never develops either, just trails off and gets forgotten.

However, weak as the film is, the fact that Bullet Train is doing quite well attests to audience determination to be entertained at big noisy movies in theaters this summer.