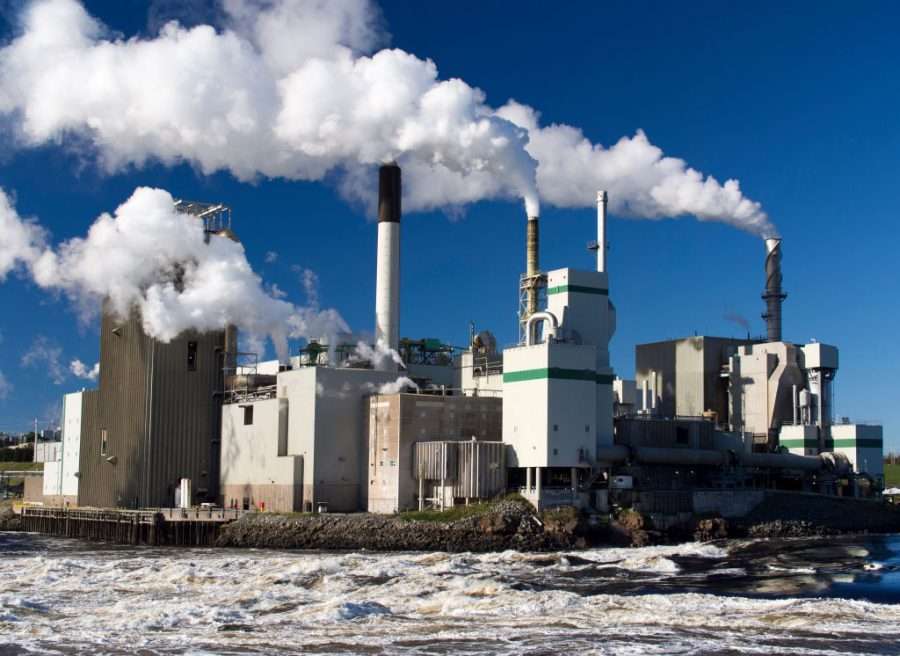 Canada’s carbon tax isn’t achieving much for the environment, and because the tax falls heavily on working people, it is more unpopular than ever. Without a redesign, the carbon tax is a gift to right-wing populists.

In Canada, the minimum tax per tonne of CO2 will progressively increase to $170 by 2030. (Planet One Images / Universal Images Group via Getty Images)

In 1912, the fact that excess carbon released into the atmosphere could warm up the earth was first made public knowledge. Here we are, one hundred ten years later, still wondering what to do about the problem. A carbon tax, intended to disincentivize increasing carbon emissions by putting costs on pollution, has become one of the leading economic measures used to confront the climate crisis. Perhaps nowhere in the world has the debate over carbon tax implementation raged quite as fiercely as in Canada.

According to the World Economic Forum, at least thirty countries have implemented some kind of carbon tax. In Canada, the ruling Liberal Party has demonstrated the most serious commitment to this concrete policy mechanism. Justin Trudeau’s government has set a minimum price on carbon. As of April 1, 2022, the minimum tax was raised to $50 per tonne of CO2 and will progressively increase to $170 by 2030.

Socialists don’t have any reason to be particularly hopeful about the carbon tax. While it’s clear that a carbon tax is a strong fiscal instrument to discourage pollution, without a host of other measures, it is unlikely to achieve the large-scale transformation required to help achieve “net-zero” emissions. Furthermore, as Joël LaForest argued in the spring of last year, it is hardly the road to equitability it purports itself to be. As LaForest notes, “Carbon pricing spreads the costs of carbon across the economy at large. It is not the fault of individuals that we live in automobile-dependent cities, heated and powered by fossil fuels.”

Stopping Canada’s ongoing reliance on fossil fuels, LaForest observes, will require large-scale interventions in “public transportation, renewable power, electrification, housing construction and retrofits, and new infrastructure.” Absent these interventions, which any socialist government worth its salt would surely need to prioritize, the carbon tax is rather like a “sin tax.” The underlying addictions remain essentially unchanged; they just become a bit more expensive to feed. No replacement for the addiction is on offer.

Misgivings about carbon taxes, then, are fair and necessary. This does not mean, however, that carbon taxes should be abandoned altogether. The fact that Conservatives are dead set against carbon tax implementation is no reason to throw the baby out with the bathwater. A carbon tax is an insufficient measure on its own, but we need every quill in our quiver.

The problem with the Canadian carbon tax is twofold. First, its framing plays into the hands of the Right. Conservatives are depicting the tax as an assault on working Canadians when, in fact, it should be framed as a fair and long overdue penalty on some of the country’s biggest, dirtiest corporations. Second, its current design does not allow it to be the redistributive mechanism it should be.

Under Andrew Scheer, the federal Conservatives campaigned in the 2019 election to eliminate the carbon tax. Scheer’s successor, Erin O’Toole, proposed a carbon pricing plan that was intended to be an alternative to that of the Liberals, yet it was met with fierce resistance in his own party. He lost his job in the subsequent leadership review. The current front-runner to replace O’Toole, Pierre Poilievre, staged an “Axe the Tax” rally in Ottawa that drew hundreds of supporters. In front of the fired-up supporters, he artfully characterized the carbon tax as a burden on the everyday necessities of life:

In mere hours, the clock will run out and Trudeau’s tax hike will take effect at our gas pumps, on your heat and, indirectly, on your food and essentials of your life. As if we don’t have enough problems already, he decides he’s going to raise the costs even further.

At the same time, the premier of Canada’s top oil-producing province, Alberta, was asking the federal Liberals to scrap the tax. Premier Jason Kenney said the goal of the tax was “to make life less affordable for people.” His public statements appeared to concede that the federal government has the prerogative to make tax policy in this area, but that he wanted to make it perfectly clear that his government was “opposed to carbon taxes in principle.” Kenney subsequently lost a leadership review of his own, but it had nothing to do with his opposition to the carbon tax. He had been unpopular for a long time, in large part because of his handling of the COVID pandemic.

The front-runner to replace Kenney, Danielle Smith, is even more vociferous in her opposition to the tax. She has said: “The carbon tax is a sham. I will end it. Homegrown Alberta tech is making our oil industry the cleanest and lowest emitting in the world.”

For contemporary Conservatives at the national and provincial level, the carbon tax has become a useful political baseball bat with which to smack around the reigning Liberals. But historically not all Conservatives have been so inclined. There was perhaps no spokesperson for carbon taxes more passionate than Preston Manning, the grandfather of Western conservative populism and erstwhile leader of the now defunct Reform Party (which merged with the Progressive Conservative Party to form what is now the Conservative Party tout court). As columnist Chris Selley observed in the National Post, Manning “argued tirelessly that simple, revenue-neutral carbon pricing is the most conservative approach available to fighting emissions.”

Canada’s carbon tax was championed by the Ecofiscal Commission, established in 2015 as a think tank fronted by “experienced, policy-minded economists from across the country.” Its mission was to “identify and promote practical fiscal solutions for Canada that spark the innovation required for increased economic and environmental prosperity.” It was headquartered at McGill University, one of the most prestigious postsecondary institutions in the country.

In the first annual report, Ecofiscal’s chair, Chris Ragan, announced proudly that his advisory board had brought together “former political opponents” such as Jean Charest (former premier of Quebec as well as the former leader of the federal Conservatives), Paul Martin (former Liberal prime minister of Canada) and, yes, Preston Manning. The board also included the CEO of Suncor Energy, one of the country’s biggest oil producers, with massive operations in Alberta’s notorious oil sands, as well as the CEO of the David Suzuki Foundation, arguably Canada’s best known environmental nonprofit. This setup was deliberate. The idea was to take the partisan sting out of any forthcoming economic solutions on climate change.

“We’ve enriched a public discussion that is gaining more traction every day,” Ragan wrote in the annual report. “Meanwhile, we’re fielding requests for quiet conversations behind the scenes to help governments think through sensible policy design. All of this suggests to me that we are achieving exactly what we set out to do.”

This all sounded very Canadian, very consensus-based, very sensible. Who could possibly be upset when policy measures that vaguely resembled the commission’s policy recommendations officially became the law of the land?

The polarized debate in Canada is an example of the kind of conflict between haves versus have-nots that had been predicted in these very pages, by Suresh Naidu:

A non-intrusive tax would raise the price of carbon, and the economy would adjust, and we can keep going. But I think the magnitudes of the taxes required, together with the sheer size of the carbon economy, mean that even this liberal measure would lead to political conflicts between the haves and the have-nots that would be closer to redistributive politics than gentle timelines of mitigation and adaption.

It didn’t matter that the Ecofiscal Commission was able to forge a consensus among Canada’s oil producers and environmentalists, Western populists, and members of the Liberal Party establishment. The carbon tax, as currently implemented, has been painted by reactionaries as a policy instrument for the elites.

As Naidu points out: “The immediate effect of carbon taxes is an increase in carbon prices, and this is largely regressive, falling on households and countries with low incomes.” This is where many Canadians feel they are right now. At a time of rising inflation generally, the carbon tax feels like just another burden on already overburdened households. This is why some provinces, to help offset increased living costs, felt it best for their citizens to receive rebate checks. Such checks were recently sent out in Alberta, Saskatchewan, Manitoba, and Ontario. In Canada’s other provinces and territories, revenues raised by the carbon taxes are returned to the respective provincial and territorial governments.

The fact that only some Canadians received checks, and even then, very quietly — with no corresponding political messaging to explain why — is a lost opportunity. But it is hardly surprising: poor design and bad messaging is very much in keeping with the history of Canada’s carbon tax. The political framing is always aimed at elites, not at working people.

The financial pain of ordinary Canadians, currently of great political advantage to Conservatives, is not primarily the result of the carbon tax. It’s the result of greedy corporations seeking to maximize their profits. Wealthy individuals and corporations will never have reason to blink at cost increases that are a result of the carbon tax. They aren’t affected by the rising price of food, housing, or other necessities. For them, this tax is pocket change.

Furthermore, as Naidu argues in Jacobin, the carbon tax will result in the consumption of carbon going down. Alternative technologies will evolve that are subject to less tax because they will be less carbon intensive. That means, in turn, that companies will no longer pass along the increased costs of the carbon tax to ordinary people.

A global carbon tax could be a way of redistributing wealth. As authors Ian Parry, Simon Black, and Karlygash Zhunussova showed in a paper published by the International Monetary Fund, “Carbon tax revenues can be recycled in ways that make the overall reform distribution neutral, or progressive, through using some revenue for targeted measures.”

Effectively redistributing carbon tax revenue — from corporations to working Canadians — has the potential to bring popular opinion in line with national policy. For this to work, it’s critical that the amount of money returned to Canadians be substantial. Alberta saw the highest payouts at $1,079 per person for 2022. It’s currently unclear whether that’s really going to move the needle on public opinion.

For the carbon tax to have any useful political and ecological currency, it will need a massive increase so as to be a genuine disincentive to polluters. It will also need to include payouts to workers that go well beyond merely easing financial pain — it must become socially redistributive, creating genuine prosperity among Canada’s low and modest-income earners. With these changes, the carbon tax would not only do what it purports to do — it would also no longer be a political gift to Canada’s right wing.

This is a critical moment. If Conservatives win this argument, it may well spur Pierre Poilievre to the prime minister’s office, from which he will scrap the tax in a few years. With it will go our chance to include a robust carbon tax that can meaningfully address climate change and transfer wealth from some of Canada’s biggest corporations to its financially stressed workers.