Home / News / Democrats Have Delivered for Wall Street Yet Again 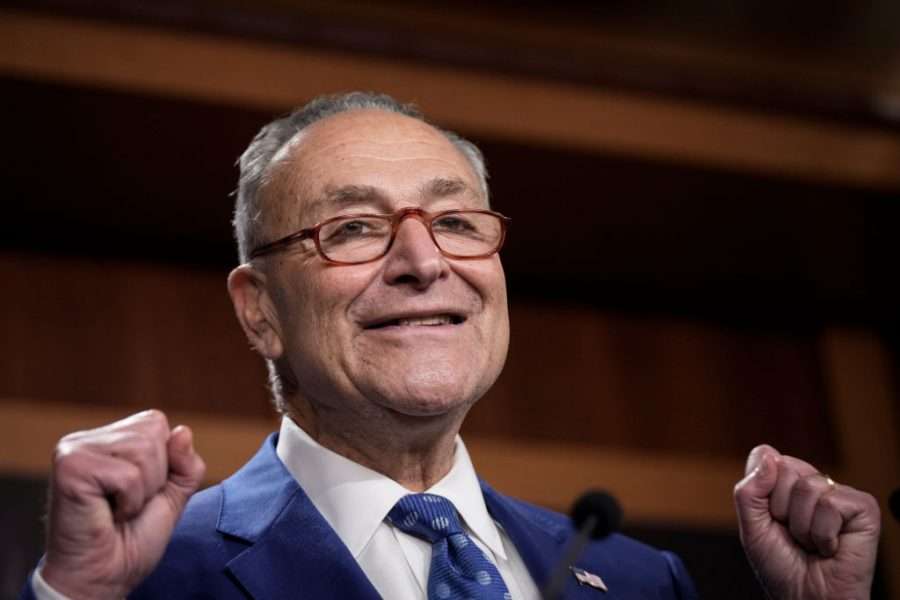 Democrats pretended they were cracking down on private equity moguls. The truth: Dems were actually protecting them — perhaps because private equity firms are major Democratic donors.

Democrats and the Washington press corps spent the last week insisting that the party was about to close a notorious tax loophole that allows many Wall Street billionaires to pay a lower tax rate than most Americans.

In truth, the proposal would have left most of the loophole open, fulfilling Senate majority leader Chuck Schumer’s (D-NY) long-standing pledge to protect the private equity industry that bankrolls his campaigns. Now the plan is gone.

On Thursday night, Senator Kyrsten Sinema (D-AZ), a favorite of private equity donors, announced that Democrats “have agreed to remove the carried interest tax provision.” Meanwhile, President Joe Biden — who pledged to close the loophole — continues to decline to try to use his executive tax enforcement authority to shut the tax break.

Taken together, Democrats’ bait and switch allowed party lawmakers to pretend they were finally cracking down on private equity moguls while actually protecting them.

That political gift to Wall Street comes after the private equity industry has delivered $83 million to Democratic politicians and $62 million to Republicans at the federal level over the last two election cycles. That includes $1.2 million to Schumer in just the last cycle, and $283,000 to Sinema.

Despite the fact the provision was always set to mostly preserve the loophole, corporate media outlets echoed Democratic leaders’ insistence that they were closing it — even as a major corporate law firm and other experts acknowledged that was not actually happening.

“Contrary to Discussions in the Media”

At issue is the so-called carried interest tax loophole, which permits private equity managers to classify their earnings as capital gains rather than regular income. That allows them to have portions of their income taxed at the lower capital gains rate of 20 percent, as opposed to the top income rate of 37 percent.

Democratic politicians have long pledged to close the loophole, and they have previously introduced legislation to reap $63 billion by completely eliminating it. They spent the last week insisting their new Inflation Reduction Act (IRA) would do that.

“I think the people that have benefited from carried interest for years and years and years knew that they had a good run, it was long overdue to get rid of it and you can’t justify it anymore,” Senator Joe Manchin (D-WV) told the Hill last week.

However, the proposal negotiated by Manchin and Schumer rejected the party’s previous legislation and would have only slightly limited the tax break.

Instead of generating $63 billion in savings, as the 2021 proposal to fully close the loophole would, the new version would have only recouped $14 billion — effectively preserving most of the controversial tax break.

The measure would have only increased the time that firms must hold assets in order for their income to qualify as carried interest, changing it from three years to five years.

This reform would have increased the amount of private equity income subject to taxes at the ordinary rates, but only modestly, because many private equity investments last far longer than five years.

For instance, the Carlyle Group’s investment in ManorCare, a nursing home company, lasted eleven years. PetSmart has been in BC Partners’ portfolio for more than seven years. The Blackstone Group held Hilton Hotels for eleven years.

Tax law professor Victor Fleischer, the former top Democratic tax policy aide on Capitol Hill who initiated the effort to end the carried interest loophole in 2007, said on Twitter, “The Schumer-Manchin deal on carried interest isn’t great. All it does is extend the holding period from 3 to 5 years. . . . Most private equity deals are 5-7 years, so most carried interest will continue to be taxed as long term capital gain.”

DLA Piper, a law firm with a large private equity practice, noted in a client alert last week that the IRA “would not, contrary to discussions in the media, close the carried interest loophole.”

One way to know for sure: As corporate lobbyist Liam Donovan tweeted, existing Democratic legislation to fully close the loophole would have raised more than four times as much revenue as the provision originally included in the Manchin-Schumer deal.

It should not come as a shock that Democrats weren’t pushing to outright close the carried interest loophole.

Schumer, for example, has long been an ally of the private equity industry. In 2009 and 2010, he tried adding a poison pill to a legislative effort to kill the loophole.

After many news stories indicated Sinema was pushing to remove the measure, she issued a statement saying that Democrats are nixing the carried interest proposal. She added that she’s planning to work with Senator Mark Warner (D-VA), to “enact carried interest tax reforms, protecting investments in America’s economy and encouraging continued growth while closing the most egregious loopholes that some abuse to avoid paying taxes.”

Corporate Media Gets the Story Wrong

As the private equity industry and Sinema worked to kill Democrats’ carried interest proposal, corporate media outlets repeatedly oversold the measure, saying it would end the loophole entirely. These mistakes had the effect of making Schumer and Manchin look like populist heroes while also providing cover to those who wanted the measure gone.

In their August 2021 press release, Wyden and Whitehouse said, “Unlike other bills, the senators’ bill would close the entire carried interest loophole.” Similarly, Punchbowl News, one of the Beltway’s most reliable purveyors of corporate spin, oversold the carried interest changes several times.