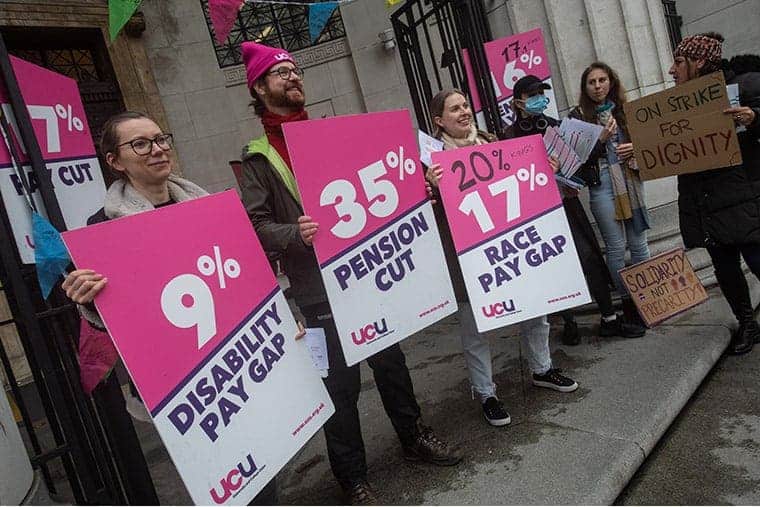 My union, UCU, has been on strike several times in the last four years. I’ve been on picket duty in Milton Keynes and Cardiff and, despite some gestures of real support from other groups of workers, it’s been hard work.

It’s a sign of the historically low level of class struggle that before this last two months I hadn’t visited any other picket lines in six years. That picket line was about 20 people who were desperately resisting the closure of the small factory at which they worked.

They were, on the whole, grim and pessimistic. And they lost. These last few weeks have felt like living on another planet. The picket lines are very public, they are very confident and they are also prepared for a long fight.

They want to talk politics. Again and again people talk about having so much in common with other groups of workers.  The attitude to the present leadership of the Labour Party is somewhere between disillusion and contempt.

What is also very noticeable is the level of public support. We organised some support and solidarity leafletting in Exeter city centre on 30 June.  We gave out hundreds of leaflets and had just one negative response. And it’s not just good wishes. It’s not just toots on the car horn and waves while driving past.

So we’ve started to organise a network of trade union activists across the city.  This is so that each future strike gets quick practical support from other working people.

We are building the start of a serious resistance. We are now planning a rally, both to celebrate the activity so far and also to organise for the autumn. Because when we say we’re all in this together, we mean it. Not like the bosses and the millionaire Tories.

There was widespread outrage across Northern Ireland after new Tory Secretary of State Shailesh Vara signed off a Public Interest Immunity (PII) certificate.  The PII is a block to the release of vital information at the inquest into the death of 14 year old Belfast schoolboy Noah Donohoe.

Noah went missing two years ago and his naked body was discovered six days later in a storm drain. Noah’s family have consistently claimed that the police did not take the search for him seriously.

PII certificates were widely used to protect information about police informers, especially among paramilitary groups, during the Troubles. But this is now being used in a case of a missing schoolboy.

There have been claims in the media, including an account from a former prisoner, that a cellmate had confessed to being involved in Noah’s murder.  The cellmate also said he was helped in disposing of his body by others in a predominantly Loyalist area of North Belfast.

Police collusion with Loyalist gangs had been repeatedly exposed in investigations in the North. Now Vara, like all his predecessors, has colluded in the police cover-up.

Hundreds have attended demonstrations outside police stations across Northern Ireland to protest against the decision.

You can support the Donohue family by signing the petition – bit.ly/NDonohoe

In the Socialist Workers Party pre-conference documents, it was stressed that we should avoid using comments like “I am mad” or “I feel stupid”. This is because this language can cause distress to some people.

A comrade has raised with me their concerns about the cartoon in edition 2815 (Socialist Worker, 27 July) with the description of the Tory party candidates as “bastards”.

Using this term in this way did cause distress and I fear that Socialist Worker fell short of its high standards. I hope some form of apology will be printed.

Does Socialist Worker have to resort to language of the gutter press when talking about the Tories?

When you call them “bastards” you’re debasing our cause and sound like The Sun.

Solidarity—put money where mouth is

The rail and telecoms strikes have been an inspiring example of workers fighting back. They’ve been a revelation for thousands of people who haven’t felt sure about how to fight.

But CWU and RMT union members don’t get strike pay. That means every day of action they take, strikers are losing money against the backdrop of the cost of living crisis.

We need these strikes to win because their victory will give confidence to all working class people. And that means we need a serious campaign of collections and solidarity in Britain.

If your union branch donates to the local strike fund, that’s fantastic. It’s not enough on its own. We need to see solidarity actions with workers and trade unionists and socialists going out into the communities to shake buckets and raise money for the strikes.

We’ve seen the way that the arguments of the CWU and the RMT have resonated across the working class. Now we have to drive those arguments deeper into working class communities to ensure strikers can take the kind of action that can win.

A thought on Taiwan

Although claimed as part of China, any reunification would crush Taiwan democracy. The slow strangulation of Hong Kong’s truncated democracy would no doubt be repeated.

Taiwanese independence would give way to a huge militarisation of the island by US imperialism. Short of a proletarian revolution in China, perhaps the maintenance of the status quo would be the least worst option?

The people who run the energy industry in this country are criminals. Companies are raising prices to astronomical levels.

And now the Ofgem regulatory body is saying prices will be updated quarterly, rather than every six months.

Now firms have more chance to squeeze us.

Pass football to the girls

Whatever your position on the England win at the Euros is, I’m sure everyone agrees that girls should be given the same opportunities as boys to play sport.

Yet only 44 percent of secondary schools provide equal football lessons for both boys and girls. This disagreful statistic is the collision of sexism and years of cuts to education.

I notice that some 800,000 people have cancelled their subscriptions to Netflix and Amazon, as the cost of living crisis begins to take hold.

I wonder if all those people will now be able to afford to buy houses? The right wing myth suggests it was buying frivolous items such as streaming services that was stopping them.