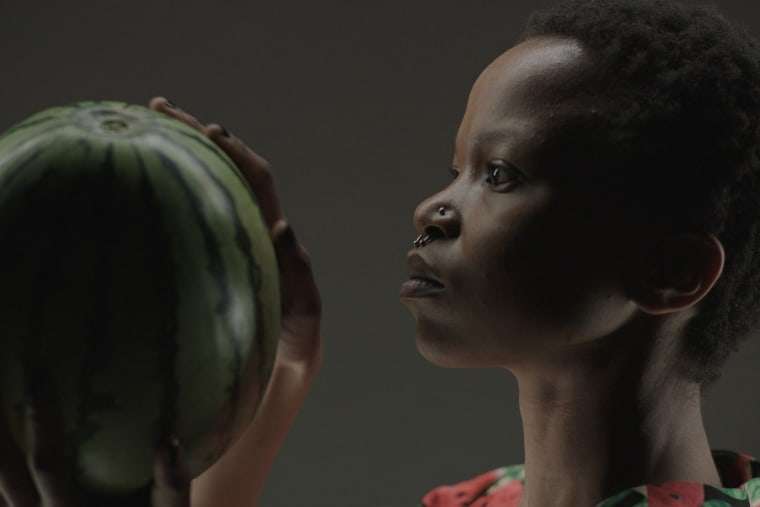 Boris Johnson’s racist remark about black Africans having watermelon smiles epitomises the ideology of Britain and empire, then and now.

So a glimpse into the mind of a refugee makes for a powerful piece of theatre, debunking racist myths. We’re told, “My name is Mandla. It means power. I gave it to myself.”

Over the next hour racism, homophobia and murder are a few of the themes explored in a riveting solo performance. Mandla Rae is a gay Zimbabwean writer and actor, using the pronouns they/them.

A three page set of notes of “house rules” for watching is given to audience members to read beforehand. A shadowy square space with white lights defines the stage. The edge of a frame represents a door. In the middle is a table, with various tools, a stool and several watermelons scattered around the space.

Mandla mumbles a prayer and admits to being “a little bit psychic” and “risen from the dead.” And maybe a bit of a liar.

As the stories unfold the watermelons are smashed or cut to pieces with tools and bare hands, sometimes the juice rubbed into the face. The audience is drawn in with clever word play and funny moments. But the loud banging on the door off stage betrays deep fears of what we only can imagine as the “hostile environment” towards those seeking asylum.

There are more questions than answers. How do you know that you’re gay? Why stay in a country where you have suffered so much or why love the English language?

Chopping up melons becomes a metaphor for pent up anger at a world of hurt and lies. Mandla provides a clear message of compassion and humanity.

As British as a Watermelon at the Edinburgh International Festival, 23-26 Aug

A fierce tale against British oppressors

It’s very loosely based on the lives of the real life revolutionaries Alluri Sitarama Raju and Komaram Bheem. Raju and Bheem led uprisings for independence against the British Raj in the 1920s.

The story opens in 1920 in a village of the Gond people in Adiabad. While the monstrous British administrator Sir Scott Buxton amuses himself slaughtering wildlife, his sadistic wife Catherine takes a shine to young child Malli.

Buxton abducts the child, imprisoning her in his imperial fortress where she must entertain the British occupiers. But Malli’s brother, Komaram Bheem, is the protector of the Gond, and he vows to rescue her.

The British send their undercover agent Raju to take him out. In one scene Raju beats a crowd of hundreds.

The scene where Bheem attacks the Viceroy’s garden party with a menagerie of wild beasts is worth the price of admission alone. The film’s depiction of the British Raj as the work of heartless, racist monsters warmed my anti-imperialist heart.

The credits are played out to a brilliant song and dance routine celebrating and calling for revolution in which the whole cast and the director take part. While they dance, pictures of heroes of the anti-British colonial struggle come up behind them.

One was the socialist revolutionary and anti-colonialist Bhagat Singh. You don’t get that in Marvel post-credit sequences.

RRR directed by S. S. Rajamouli, on Netflix and in selected cinemas now