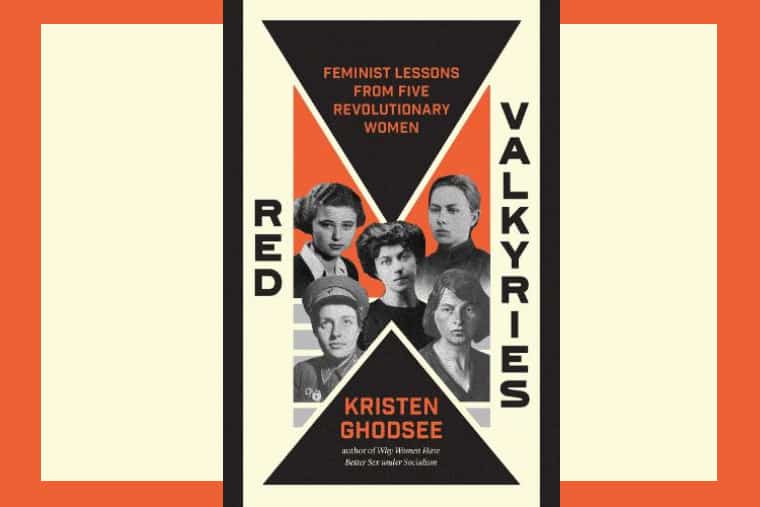 Kirsten Ghodsee links the fight against capitalism with women’s liberation

Red Valkyries tells the stories of five outstanding women. Kristen Ghodsee’s aim is to puncture the overwhelming narrative of liberal feminism with the tradition of socialist women, who’ve been systematically ignored by mainstream historians.

She argues that liberal “lean-in feminism” only works for wealthy women. And, moreover, it relies on poor working class women—often from the Global South—to do the house work and bring up their children.

Ghodsee selected the five women to show it is possible to combine the fight against capitalism with the fight for women’s liberation. They are Alexander Kollontai, Nadezhda Krupskaya, Inessa Armand—leading women in the Russian Revolution of 1917—and Ludmila Pavlichenko and Elena Lagadinova.

Kollontai was an extraordinary woman who broke with her aristocratic background and conventional morality, and devoted herself to socialist revolution and transforming the lives of working class women. She had studied Frederick Engels’ and August Bebel’s works on the roots of women’s oppression.

She understood the need to socialise the work of women in the household through collective provision of child care and communal eating, as well as developing alternative ways of living.

Kollontai wrote extensively about sexual relationships, and the need to create strong networks of relationships based on solidarity and comradeship. At key turning points in her revolutionary journey from 1914 to 1917, she sided with the revolutionary Vladimir Lenin. In 1917, she became the minister of social welfare in the revolutionary government. She led the changes in the legal codes that put Russian women’s legal rights years ahead of the rest of the world, and worked tirelessly to implement her ideas.

Nadezhda Krupskaya is often portrayed simply as Lenin’s companion, focusing on the indispensable role she played in supporting him build the Bolshevik party. But Ghodsee centres Krupskaya’s own achievements. She wrote a pamphlet, The Woman Worker, encouraging women workers to join the revolutionary struggle.

Her passion was education and transforming ways of teaching. She believed in child centred pedagogy, combining learning with activity. Krupskaya’s guiding principle was, “The most important distinguishing feature of socialist schools should be ……the child’s fullest possible and most comprehensive development.

“They must not suppress his individuality but only help develop it. Socialist schools are schools of freedom in which there is no room for regimentation, rote learning and cramming.”

After 1917 Krupskaya became the deputy minister in charge of adult education, supervising the creation of public libraries and organising campaigns to eradicate adult illiteracy.

Iness Armand was a lively personality, musical and multilingual. She did numerous translations for Lenin and often represented the Bolsheviks at congresses. After the revolution, Armand was elected to the Moscow Soviet (workers’ council) and was in the All Russian Central Executive Committee, the highest body in the new workers’ state. She taught in party schools and organised conferences for working women.

In 1918, Kollontai and Armand jointly organised a national congress for working women attended by 1,200. Armand was part of the leadership of the Zhenotdel, the Women’s Section of the Bolshevik Party and chaired the First International Conference of Communist Women in July 1920.

Armand herself had led a complicated personal life with five children, the last by her young brother in law. She was probably, briefly, with Lenin. After her tragic death from cholera, Lenin and Krupskaya subsequently adopted her two youngest children.

Neither Lyudmila Pavlichenko nor Elena Lagadinova were revolutionaries. They came in the horrors of Joseph Stalin’s counter-revolution, which represented a break with 1917 and built a brutal state capitalist regime.

Pavlichenko was a first rate Russian sharp shooter during the Second World War. She was sent by dictator Joseph Stalin on a delegation to the US to win more support for the Soviet Union’s war effort.

Elena Lagadinova, at the age of 11, was the youngest female partisan in Bulgaria in the Second World War. Afterwards she became a geneticist in Bulgaria until Stalinist president Todor Zhivkov appointed her to run Bulgaria’s Women’s Committee because birth rates were plummeting.

Lagadinova concluded this was the result of the “second shift” women worked in the family after coming back from work. She became a well known contributor to international conferences, speaking on the role of women in officially “socialist” societies. She attained an important position in the United Nations Institute for Training Women. After the collapse of Stalinism in Eastern Europe in 1989, Lagadinova was forced into retirement.

Bulgaria was an oppressive, state capitalist country modelled on the Soviet Union, the result of the imperialist carve-up of Europe in 1944 between Stalin and Winston Churchill.

There had been no socialist revolution led by the working class, unlike Russia in 1917 Zhivkov, who appointed Lagadinova, was a vicious nationalist responsible, amongst other things, for expelling Muslims to Turkey.

Lagadinova undoubtedly had women’s interests at heart, but she in no sense shared the revolutionary practice and vision for liberation of Kollontai, Krupskaya and Armand. She embodied “socialism” and “women’s liberation” from above.

The richness of the three chapters about the revolutionary Red Valkyries is marred by Ghodsee’s merging of the Revolution in 1917 and Stalin’s counter revolution.

Unfortunately, Ghodsee reflects a top down Stalinist version of socialism. She can idolise leading Bolshevik women alongside women who worked for state capitalist dictatorships. So read—with a critical eye—the chapters about Kollontai, Krupskaya and Armand.