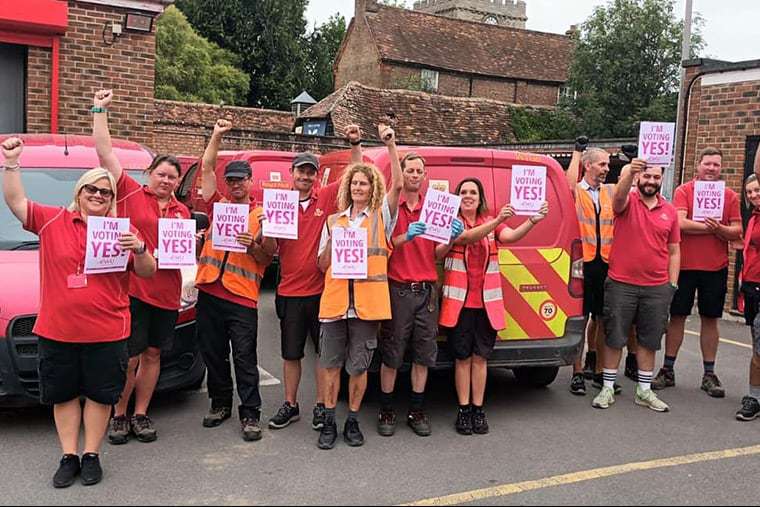 Postal workers, like these ones in Wantage, voted for action in vast numbers

Around 115,000 postal workers in Royal Mail are set to strike for four days in August and September. Their action should be a focus to build massive strikes to transform the present scale of resistance over pay and against the Tories.

It follows bosses’ imposition of a below-inflation “rise” of 2 percent. And that’s even more poisonous after the company has recently announced a £758 million profit, paid £400 million to shareholders and handed millions to its executives.

In response workers voted 98 percent for strikes on a 77 percent turnout.

Jane Loftus, vice-chair and postal chair of the CWU, told Socialist Worker, “It’s outrageous that Royal Mail, a company awash with profits and handing millions to its top bosses, wants to cut the pay of the workforce in real terms.

“Everywhere now people are saying they have had enough and aren’t going to take this sort of treatment anymore.

“We want our pay strikes to be an encouragement to others to fight. Royal Mail management may well act in a ruthless way, but the CWU can beat them if we use all our strength. We’re looking for support and solidarity from workers everywhere.”

There is now a tremendous potential to unite strikes and make 26 August a focus for the whole working class. Well over 200,000 workers could come out that day—and that’s just the ones with live strike votes now.

If they move in the next 48 hours to give the necessary notice, the RMT, Aslef and TSSA unions on Network Rail, the train operating companies, the London Underground and the Overground could all stop that day. That’s over 50,000 workers.

Add In BT another 40,000 workers—also in the CWU—who could be out. Then there are the Post Office Limited counters and cash distribution workers. Then there are local strikes at several bus companies. There are bin workers, health workers and even barristers who are in dispute and could strike.

Around 2,000 workers at Felixstowe—Britain’s biggest container port—have already announced a strike from 21-29 August. So they could be part of it as well.

Add in Royal Mail, and it’s well over 200,000 workers. That would really shake up bosses and the Tories. And it isn‘t against the anti-union laws.

It can go much further. It should be a day for the whole working class. Union leaders must appeal for everyone to join in, come to rallies and marches and if possible strike. Make it a big all-union push for action at Amazon and Uber and all the other places where people are seething for action.

And it could kick off strike ballots in the NHS, local government, the civil service and other parts of the public sector.

The 26 August is also the day when Ofgem, the energy regulator, announces the next price rises in gas and electricity that will be applied in October. So as well as the pay strikes, the rallies and marches can be open to everyone who wants resistance to the deadly scale of price rises.

It could focus climate change campaigners and anti-racists around the powerful core of working class action.

Friday 26 August should be Fightback Friday for every worker. The only thing that will stop it from happening is if the union leaders don’t act quickly.

They must be pressured to build the individual sets of strikes but also to come together and to lay the basis for even bigger action by millions.