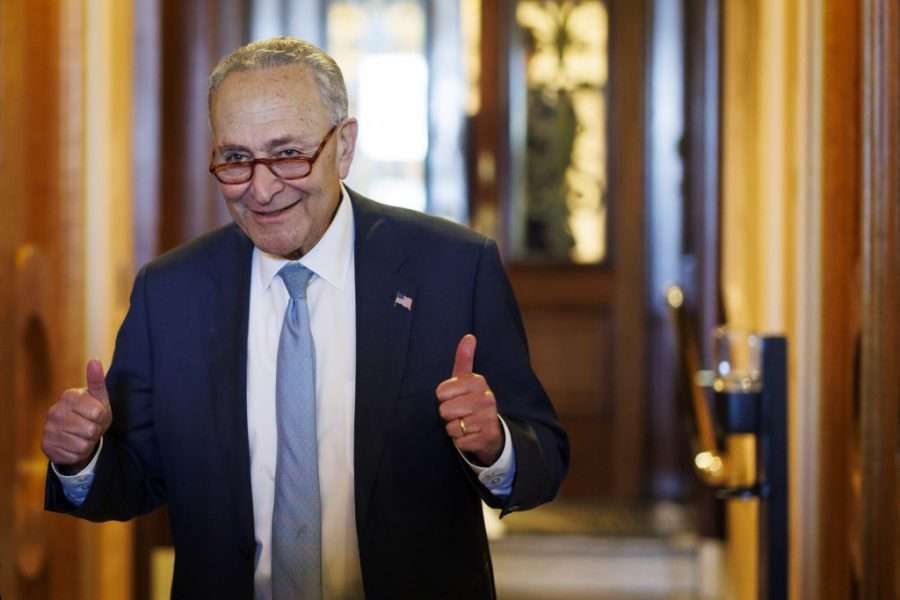 Chuck Schumer’s relatives and former staffers are now lobbying for the Blackstone Group, Amazon, Intel, and Google, among other corporate giants — all of which have been lobbying on pending Senate legislation. (Ting Shen / Bloomberg via Getty Images)

The hire spotlights the network of Schumer’s family and former staff with ties to major companies with legislative business before the upper chamber run by Schumer.

Indeed, Schumer’s relatives and former staffers are now lobbying for the Blackstone Group, Amazon, Intel, and Google, among other corporate giants — all of which have been lobbying on pending Senate legislation.

This session of Congress has, so far, been favorable to these companies. An antitrust bill designed to crack down on major tech companies still has not received its promised vote on the Senate floor — thanks to Schumer — and Intel stands to be the primary beneficiary of a subsidy package aimed at semiconductor companies that passed Congress in July.

Just two days after Schumer announced a deal with Senator Joe Manchin (D-WV) on a legislative package of energy and health care spending, as well as tax provisions to offset that spending, Capitol Account reported that the private equity firm Blackstone Group had hired Michael Shapiro, Schumer’s son-in-law, as its managing director of government affairs.

Blackstone’s website lists Shapiro as having a “focus on infrastructure investments and projects.” Shapiro previously worked in the Department of Transportation and sat on President Joe Biden’s infrastructure implementation task force.

“He will not be involved in any advocacy before the majority leader or his office related to Blackstone business,” a Blackstone spokesperson told Capitol Account about the hire.

Donors from Blackstone are Schumer’s third-largest campaign contributor in this election cycle. The Schumer-Manchin deal, the Inflation Reduction Act (IRA), was covered in much of the media as ending the “carried interest” loophole that benefits Blackstone executives and private equity moguls writ large.

In reality, the proposal would have kept most of the loophole, and would have permitted private equity and hedge fund managers to continue paying much lower tax rates than the standard income tax rate. Democrats spent a week insisting their new legislation would terminate the loophole — but the proposal would have only minimally limited the tax break, likely allowing most private equity managers to continue benefiting from a preferential tax rate not available to typical workers, as we reported.

At this point, it looks like their proposed carried interest changes have been removed from the deal at the urging of Senator Kyrsten Sinema (D-AZ), a favorite of private equity donors.

In 2021, Blackstone managers deferred an estimated $3.7 billion in income to recognize the tax advantages of the carried interest loophole, according to a Financial Times analysis.

The company has for years employed lobbyists from Subject Matter, including Steve Elmendorf, Cedric Grant, Bill Ghent, Keith Castaldo, and Barry LaSala, who are all former Democratic congressional staffers.

Subject Matter’s recent work for the firm has included lobbying on “issues related to carried interest.” In total, Blackstone has spent more than $1.5 million on lobbying so far in 2022, according to OpenSecrets.

Schumer has also declined to hold a vote on major antitrust legislation that would prevent tech monopolies from using their power as gatekeepers to hurt competitors — even as the bill’s advocates say it has the support needed to clear the sixty-vote threshold in the Senate.

His daughters and dozens of former staffers work for companies that would be impacted by the legislation.

His daughter Jessica Schumer, who is married to Shapiro, is a registered lobbyist for Amazon in New York State. His daughter Alison Schumer works for Meta (formerly known as Facebook).

In 2016, when his daughter Alison worked for Facebook, Schumer reportedly intervened on behalf of the company to tell Senator Mark Warner (D-VA) to back off his attacks toward the company amid overlapping scandals.

Apple, Amazon, Google, and Meta spent a combined $16.7 million on lobbying in the first quarter of 2022, and more than $90 million over the past eighteen months. Meanwhile, industry groups have spent almost $120 million on ad campaigns opposing the legislation. Donors from Alphabet (Google’s parent company) are Schumer’s fifth-largest campaign contributor this cycle.

At a fundraiser in late July, Schumer told donors that he wouldn’t be holding a vote on the legislation before the August recess because he didn’t think it had the support to pass.

Senator Amy Klobuchar (D-MN), the bill’s lead sponsor, later said in a statement that “we were promised a vote on this bill and we take [Schumer] at his word.” According to reporting by Politico, Klobuchar believes the bipartisan legislation has the sixty votes it would need to bypass a Senate filibuster.

Sixteen advocacy groups sent a letter to Schumer urging him to recuse himself from the legislation, given his familial ties to the companies targeted by the bill.

“While you have claimed to support antitrust legislation seeking to rein in Big Tech companies, your continued failure to put the bills to a full Senate vote raises the question of whether you are covertly seeking to run out the clock before the legislation can pass,” the letter said.

In addition to the Schumer family ties, a New York Post analysis found that more than eighty of his former staffers now work for Big Tech companies, either as lobbyists or employees. Two former Schumer aides were also lobbying the Senate on behalf of Intel, as we previously reported, which could now reap a windfall from Schumer-backed legislation to provide tens of billions of dollars in subsidies to microchip companies.