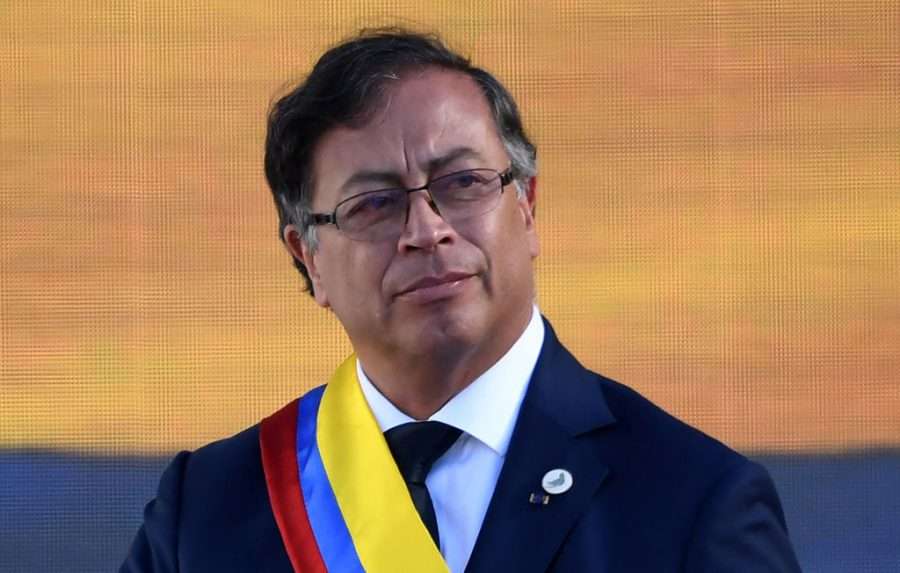 Colombia’s new president Gustavo Petro delivers a speech after swearing in during his inauguration ceremony at Bolívar Square in Bogotá, Colombia, on August 7, 2022. (Juan Barreto / AFP via Getty Images)

On August 7, 1819, the Colombian army led by Simón Bolívar defeated Spanish troops in the Battle of Boyacá, consolidating the country’s independence from Spain. Just over two centuries later, thousands of Colombians have celebrated in the streets what is hoped to be a “second liberation,” now from neoliberalism, via the ascension of the first left-wing president in the country’s history, Gustavo Petro, together with his vice president, Francia Márquez, to power. A former guerrillero and an Afro-Colombian activist now hold the highest political positions in the country, a turning point in Colombian political history and a key moment for the whole of Latin America.

For the 11 million people who voted for Petro and Francia, as they are widely known, Sunday was a day to celebrate the historic victory of the Left, preceded by mass social protests in 2019 and 2021 against the neoliberal and conservative government of Iván Duque, the political heir of former president Álvaro Uribe.

But Petro and Francia will not have much time to celebrate. Huge challenges await them.

Petro’s coalition, Historical Pact, is the biggest party in the Congress, but it does not have a majority. That is why he has built an alliance in recent months with traditional centrist forces, obtaining their support in exchange for relevant positions within the legislative and executive powers. Only Uribe and Duque’s Democratic Union (right-wing) has declared itself as opposition to the new government.

According to Bogotá political scientist Esteban Salazar, a member of the Peace and Reconciliation Foundation, Petro will probably enjoy a one- or two-year “honeymoon” with his heterogeneous parliamentary coalition, during which he will have their support, even though they ran for their own elections on completely different platforms. From the 2023 local elections onward, the situation in the Congress will likely become trickier for the government, which might lose its precarious majority.

Thus, Petro and Francia have one year to launch their more urgent and important policies, beginning with tackling the skyrocketing levels of poverty and hunger.

Colombia is the second-most unequal country in Latin America, after Brazil. This is the consequence of decades of neoliberal governments more worried about rolling out the red carpet to foreign multinational companies than about the basic rights of their people.

While stark inequalities are structural in the country, extreme poverty and even hunger have become more widespread since the COVID-19 pandemic. Now, 11 million Colombians cannot afford to have three lunches a day.

Petro has pledged to launch an “emergency plan against hunger in Colombia,” recently identified by FAO as one of the “acute hunger hotspots” in the world, the only such country in South America.

Health and Education, the Key Demands of the Social Protests

Equal access to university and more funding for higher education was one of the main demands of the young protesters who led the national strike in 2021 and previous student mobilizations in 2019. The protests, heavily repressed by Duque’s government, forced Duque to increase the resources for universities, but no structural reform was approved. Petro, by contrast, has pledged to “universalize free education.”

Health care was another salient issue in the 2021 national strike. The mass demonstrations stopped a reform project that, according to the president of the Colombian Medical Federation, “had the privatization of healthcare as its main aim.”

Unrest in response to the country’s deficient health care system has increased since the COVID-19 pandemic. The Historical Pact has promised to unify the different and partially private health care systems in a single, universal system. Both reforms will need enormous economic resources; Petro’s first legislative project will be an ambitious tax reform, which would increase the burden on the richest minority of taxpayers.

Colombia is addicted to fossil fuels, both as a consumer and an exporter (oil exports are nearly half of Colombia’s total exports). Mining is one of its most valuable industries, and it has a terrible record of social and environmental damage.

A symbol of this destructive but lucrative industry is Cerrejón in the Guajira region, which is the largest open-air carbon mine in Latin America. Opposing illegal mining was one of vice president Francia Márquez’s key battles as an activist in the Cauca department, and now she and President Petro will confront the challenge of regulating this sector.

Not only is most mining in Colombia illegal, but illegal miners, together with drug smugglers, are responsible for many of the frequent murders of Colombian social leaders, as denounced by former ombudsman Carlos Negret. Reducing the country’s dependence on mining is not only an environmental issue but also a social one.

To begin his battle against extractivism, Petro intends to forbid fracking and open-air mining and suspend new hydrocarbon explorations, a move that will likely provoke the fury of these extremely powerful industries, in which foreign multinationals play central roles. The new government wants to massively develop renewable energies, which will also need heavy public resources. All of this depends on the success of the proposed tax reform.

All these challenges are to a certain extent shared with other Latin American countries, but Petro and Francia will simultaneously face a very specifically Colombian issue: consolidating peace. Since the 2016 Havana agreement, the Revolutionary Armed Forces of Colombia (FARC) guerrilla forces are not at war with the Colombian state anymore, but the end of the internal conflict that has ripped the country apart for six decades is not yet here.

The implementation of the peace agreement is still incomplete (it was not a priority for former president Iván Duque), and the new government is expected to open a peace dialogue with the National Liberation Army (ELN), the only active guerrillas, and negotiate to stop the violence unleashed in rural areas by criminals and former paramilitaries grouped in the feared Gulf Clan.

On Sunday, August 7, thousands of Colombians celebrated their country’s second liberation in the streets. Now comes the most difficult part: making at least part of the dreams of the millions that risked their lives in the last years’ social protests, and those “nobodies” who have been excluded from Colombian politics for so long, a reality.

The stakes are high, and what happens in Colombia in the coming years will help determine the success or failure of the new left-wing cycle that has begun in Latin America.