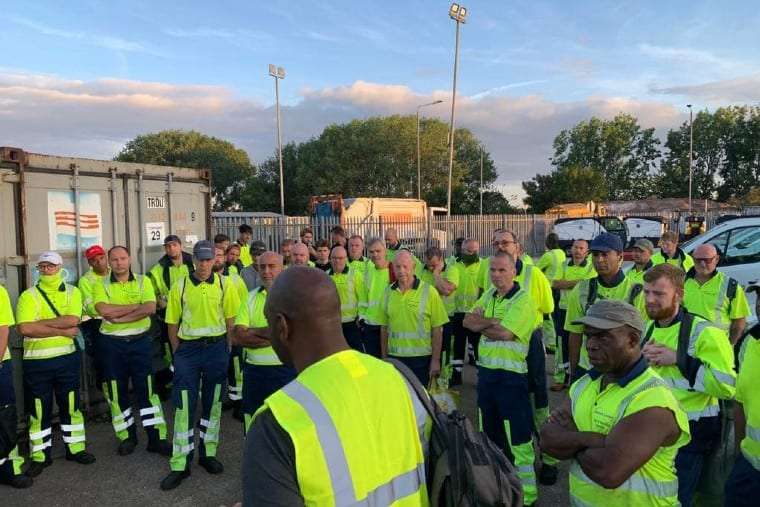 Attendees to the Edinburgh Festival this month are set to be ­picking their way through ­steaming piles of rubbish, as bin workers prepare to strike. Refuse workers, in the Unite and GMB unions, are due to walk out from next Thursday until 30 September.

They represent the first wave of action over the derisory pay offer put forward by Scottish local authority employers. Kirsten Muat, GMB Scotland organiser, said, “When visitors from across the world ask why this is happening, the response will be straightforward.

“Our members are not prepared for services to be delivered on the backs of the working poor.

“Our key workers deserved to be valued properly and ahead of a grim winter with forecasts of double-digit inflation and eye-watering energy bills, they urgently need pay that confronts this cost of living crisis.”

Workers in early years, waste and schools across all councils in Scotland voted to take action against the pathetic 2 percent pay “rise” they’ve been offered. But in most councils, ballot turnout was lower than the threshold required by Tory anti-trade union laws.

In nine councils workers are set to take action, with school staff planning to walk out in the second week in early September.

Workers at ten more councils are on the cusp of entering into a re-ballot for strikes, with results out at the same time. Already, threats of strikes have led to the Scottish government handing over an extra £140 million to councils to fund an improved offer.

The Scottish National Party has found itself in the embarrassing situation of councils offering a lower increase than the one in England. And it’s still less. If threats of action can generate some £140 million, imagine what actual strikes could produce.

Refuse workers in Surrey paused a pay strike this week for talks. The ­workers are outsourced to waste giant Amey by Elmbridge and Surrey Heath councils. They struck last week over pay.

The GMB said the strikes will resume if talks break down. Workers should keep striking and not accept a below-inflation pay rise.

All workers, who are ­outsourced to Veolia, will now be paid more than £11 an hour. Strikes could have won them an ­inflation‑­busting rise.

Refuse workers in Newham, east London, have returned a huge vote for strikes. Unite union ­membership at the depot is close to 100 percent.

On an 81.5 percent ­turnout—with 130 eligible to vote—all but one union member voted for strikes.

The workers now plan to coordinate action with refuse workers in the neighbouring London borough of Hackney.