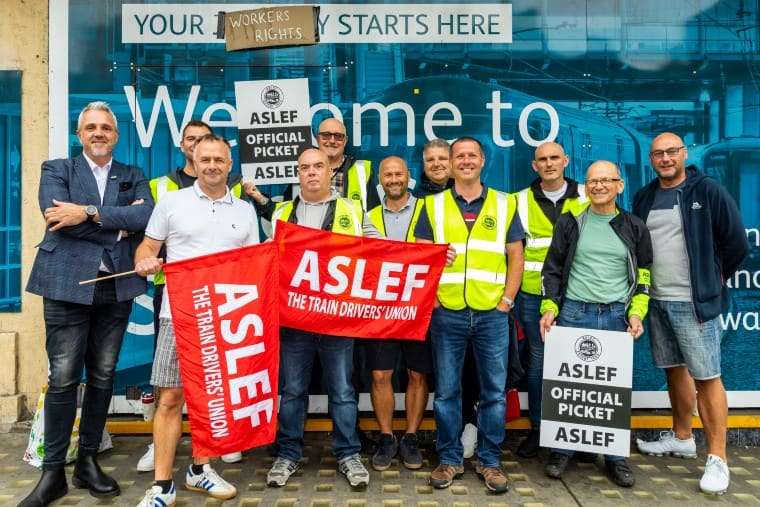 The rail network is set to grind to a halt on Saturday, with around 6,000 train drivers ­planning to strike across nine train operating companies. In their battle for better pay, the members of the Aslef union are ­showing no sign of backing down—and now more workers are ready to join the fight.

Aslef members at four more ­operating companies are currently balloting for action. Strikes by train drivers will add to the mounting pressure on the bosses and the Tories. Next week sees bigger waves of action. Rail workers across Network Rail and 14 train operating companies are preparing to strike on Thursday 18 and Saturday 20 August.

It’s a battle to save jobs, protect safety and win a pay rise that beats inflation. Andy, a Network Rail worker from east London and member of the RMT union, told Socialist Worker that strikers are “ready to win.”

“The cost of living is pushing ­everyone to strike,” he said. “And that’s right. We need fair pay—there are people who I work with who no longer have enough money to raise their kids or pay rent or bills.”

Adam is a catering worker for train operating company LNER in Northumbria. He told Socialist Worker, “The mood is strong, full of hope and optimism for a victory. “There is a worry about the loss of earnings and the cost of living crisis. Fundraisers are planned to build a hardship fund for strikers, to keep them on the picket lines.”

Strikes on Network Rail will be boosted by around 10,400 London Underground and Overground workers who plan to strike on Friday 19 August in two disputes over jobs, pay and safety.

Train managers in the TSSA union and electronic control workers in the Unite union also plan to strike on 18 and 20 August.

Strikers have to make sure union leaders don’t settle for less than a clear victory, but action on the railways are only the tip of the iceberg.  Millions of workers sense that fighting back is the only way to ­confront the cost of living crisis.

There could be strikes in the postal service in the near future, with CWU union leaders expected to announce a date for action after Socialist Worker went to press. This would catapult a further 115,000 workers into action.

And 1,600 London bus workers employed by London United plan to strike on 19 and 20 August after refusing a paltry pay offer of 3.5 ­percent this year. In addition to all this, strikes by refuse workers, ballots for action in universities and wildcat strikes by Amazon workers show a growing mood to revolt.

Unions representing hundreds of thousands of NHS workers in England and Wales are this week starting a series of ballots for strikes over pay. The Tory government has imposed a flat rate increase of just £1,400 a year, which for most workers will be an effective pay cut.

The Unite union, which represents laboratory staff and others, has just begun a five-week consultative ballot and asked its members to vote for industrial action. The nurses’ RCN will ballot for strikes from 15 September with a recommendation that members vote yes.

And, the giant Unison union is balloting for strikes—but not until 27 October.

The battle is now on to ensure the biggest possible turnout and the largest yet yes vote for strikes.

In Scotland, where the offer is a tiny 5 percent rise—a big pay cut—the results of unions’ consultative ballots on the offer were due on Friday this week.

The only way to stop the destruction of the NHS, and chronic understaffing, is to back the fight of those who work for it.

Rail workers have been given strength by huge waves of solidarity from other trade unionists and activists. Network Rail worker Andy said the support is “overwhelming”, adding that “it’s nothing that we expected”.

He believes the solidarity has strengthened the mood among his colleagues to win. “The Tories now have to think twice about attacking us because there’s an army of people behind us.”

But to make the strikes stronger, they ought to be coordinated. Union leaders from RMT, Aslef, TSSA and Unite should call out every rail worker on the same day. And every worker across every industry who has a mandate could strike on the same day.

So, for example, bus drivers and refuse workers in dispute everywhere could strike on the same day as rail workers.

Even those workers who aren’t in a union could be urged to take part. Walkouts by Amazon workers have shown that it is possible to take action without going through ballots and meeting thresholds.

A day—or even better, several days—of united strikes would send a message the Tories could not ignore. And we need more rallies and demonstrations. The RMT has called demos for 20 August in cities such as Sheffield and Liverpool.

These should happen everywhere. They can focus support, build strikes, encourage others to join the battle and provide a forum for discussion.

Every striker has to be actively involved—on the picket lines and in deciding how to take the battle forward. It can’t be left to the union leaders.