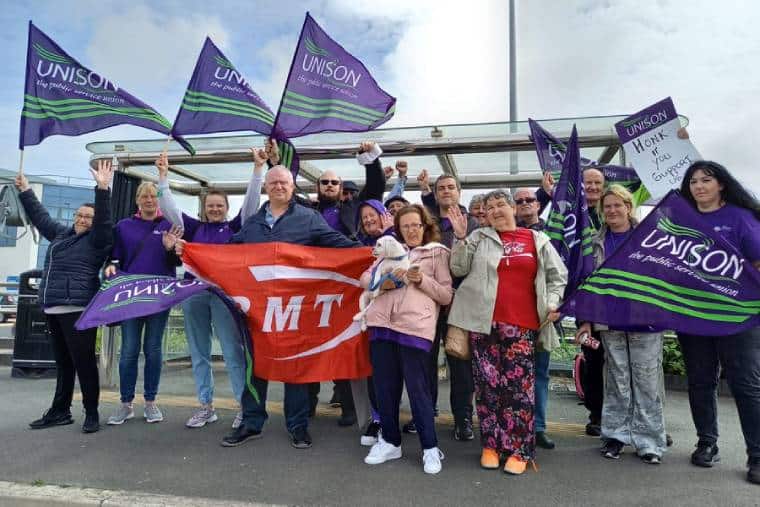 Workers have mounted strong picket lines throughout the dispute

Some 50 workers, who are members of the Unison union, want the same pay as those directly employed by the NHS.

This would mean the cleaners, porters and caterers would get extra money for working nights, weekends and bank holidays.

Strikers, who are employed by outsourcer OCS, were due to walk out this Thursday and Friday. They were then set to strike for 48 hours from this Sunday. This will be followed by a three‑day strike from 18 August.

Workers have mounted solid picket lines throughout the dispute, and they’ve been receiving solidarity from the wider trade union movement. This must continue to support these workers in this important dispute.

Felixstowe workers get ready for action

Strikes are set for the port of Felixstowe later this month after workers were offered a below-inflation pay rise.

Strike dates are set for Sunday 21 August to Monday 29 August.

The Felixstowe Dock and Railway Company failed to improve its offer of a 7 percent pay increase, significantly below the 11.8 percent RPI inflation rate.

Felixstowe is Britain’s largest container port. Some 48 percent of containers brought in Britain come through the port, so strikes could paralyse the country and severely disrupt the supply chain.

Constructing a fight over poor pay

The 124 workers, based in Chester-le-Street, are spread across the two companies but work at the same premises and are part of the same parent company Hill & Smith Holdings PLC.

An overtime ban will also commence from this Wednesday.

Workers at the AQA exam board were set to strike for four days from this Friday.

Members of the Unison union at the Manchester office are battling a 3 percent pay offer.

The soaring cost of living has left many AQA workers unable to pay bills and stay afloat.

Trade unionists should visit their picket lines and offer support.

A strike of pub workers at the St James Tavern in Brighton has been called off so talks with the leaseholder can take place.

Workers, who are members of the UVW union, planned to strike for 20 consecutive days to demand £11.50 an hour, sick pay and union recognition.

They also demanded the reinstatement of all sacked striking members of staff.