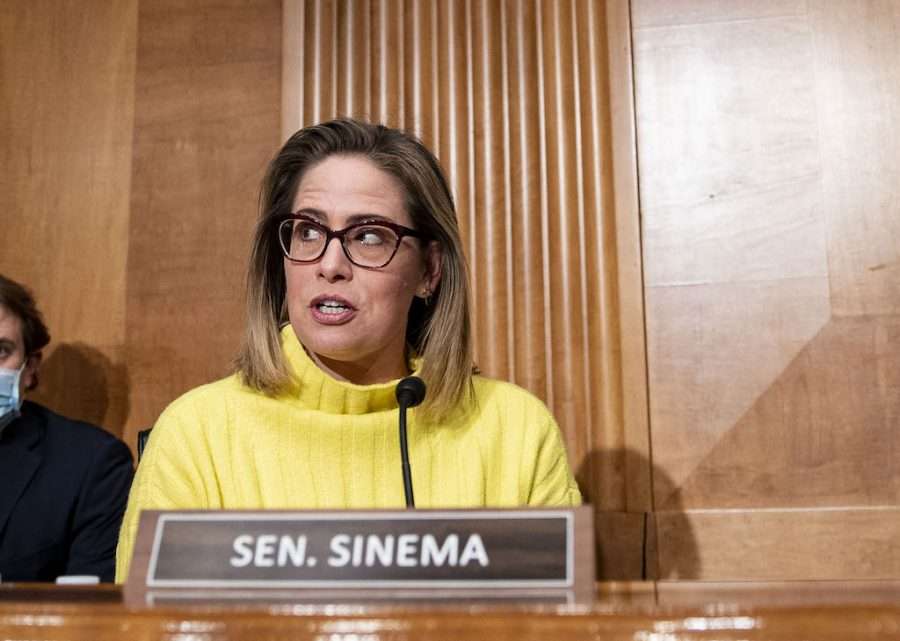 For a group of Democratic senators, blocking an expansion of the child tax credit wasn’t enough — they also had to do a huge favor for their big-money donors in private equity.

In the name of preserving carefully negotiated legislation, Senate Democrats’ leaders united their caucus to vote down amendments that would have added the party’s Medicare expansion plan and expanded child tax credit into the final spending bill now moving through Congress.

That unity, though, was not universally enforced: soon after those votes, seven Democratic senators joined with Republicans to cast a pivotal vote shielding their private equity donors from a new corporate minimum tax.

The seven Democrats who joined the GOP to give private equity firms that $35 billion gift were: Senators Kyrsten Sinema and Mark Kelly of Arizona, Raphael Warnock and Jon Ossoff of Georgia, Jacky Rosen and Catherine Cortez Masto of Nevada, and Maggie Hassan of New Hampshire.

Five of the seven Democrats are among the Senate’s top recipients of campaign donations from private equity donors, according to data from OpenSecrets. The group collectively raked in more than $1.4 million of campaign cash from the private equity industry, which has become a huge source of capital for the fossil fuel conglomerates that are creating the climate crisis.

The contrast between voting to protect private equity donors and voting against programs for the working class effectively screamed the quiet part out loud about whom senators typically respond to — and whom they don’t.

In this case, Democratic and Republican senators responded to the demands of an industry that has not only spent more than a quarter billion dollars on the last two federal elections, but that also employs an army of government-officials-turned-lobbyists to influence lawmakers in Washington. The world’s largest private equity firm is headed by one of the Republican Party’s largest donors, and now employs the son-in-law of Senate majority leader Chuck Schumer as a lobbyist.

That influence machine is fueled by $6.3 trillion industry’s profits, generated by collecting massive fees off investments by public pensions and other institutional investors. Those fees have ballooned even when the industry often provides poorer returns than the stock market. Cloaked in secrecy, the industry invests in Medicare and health care privatization, as well as virulently anti-union and fossil fuel companies.

“Even a Good One Risks Upsetting the Balance”

When Democratic leaders finalized their spending legislation, they said they would vote down amendments in order to preserve a deal that ensured support from Sinema and Senator Joe Manchin (D-WV).

“This one is so delicately balanced that ANY amendment, even a ‘good’ one, risks upsetting the balance,” tweeted Senator Sheldon Whitehouse (D-RI). “So look forward to a lot of ‘no’ votes on things we would ordinarily want. Don’t be surprised.”

Senator Brian Schatz (D-HI) similarly tweeted: “We have a deal to take the biggest climate action in U.S. history. Every Senate Dem has agreed to it. I can think of lots of ways to strengthen it, but I won’t derail this bill by supporting changes. I will vote NO on all amendments — even for stuff I like.”

Democratic senators consequently voted down a series of amendments sponsored by Senator Bernie Sanders (I-VT) that would have expanded Medicare benefits to include vision and dental services, created a civilian climate corps, and reinstated the expanded child tax credit that temporarily helped drive down child poverty.

Soon after casting those votes, however, Democratic Party unity vanished when Senator John Thune (R-SD) introduced an amendment to save private equity giants $35 billion by letting them evade the earnings threshold that triggers the bill’s new corporate minimum tax.

Championed by Democratic Senators Elizabeth Warren (MA) and Ron Wyden (OR), that new levy in the legislation was designed to apply a baseline tax to companies reporting more than $1 billion of annual earnings. The goal is to make sure that such wealthy companies pay a minimum amount of tax on their reported earnings, rather than being able to continue to evade taxes while reaping huge profits.

Thune’s amendment, however, was sculpted to create a special carveout for private equity firms. In effect, it allows those firms to avoid tallying the earnings of their subsidiaries and portfolio companies when calculating whether or not they are subject to the new 15 percent corporate minimum tax.

Sinema — who spearheaded a separate effort to make sure the legislation would fully preserve a lucrative private equity tax loophole — was the first Democrat to join with Thune to push his amendment. Soon after, six other Democrats voted with her and the entire Republican caucus to pass the amendment.

The final tally on the Thune amendment was 57-43. That was the same vote count as a separate amendment to add a cap on insulin co-pays for people with health insurance back into the legislation.

Because of arcane Senate rules, the insulin cap amendment needed sixty votes and failed. The provision shielding senators’ private equity donors from the new tax, meanwhile, only required a simple majority and passed.