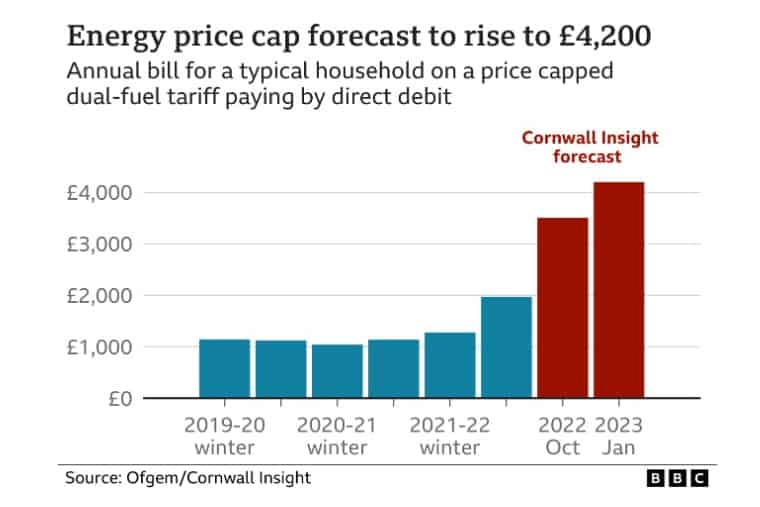 The energy regulator Ofgem has changed how it calculates gas and electricity price rises to favour the bosses. And it means the deluge of energy price rises is predicted to be even worse than the most chilling forecast a month ago.

Household energy bills in Britain are now projected to peak at more than £4,420 a year on average next spring. That is nearly £90 a week just for your basic energy supply.

The energy consultancy Cornwall Insight, which is among the most accurate forecasters of energy bills, warned the price cap could rise from £1,971 a year on average at present to £3,582 in October—an increase of more than 80 percent. The cap would then jump to £4,266 in January before peaking at £4,427 in April next year,

It raised its forecasts for coming pain following an outrageous move by Ofgem. It has announced that the fat cat energy suppliers will be allowed to recover the full costs of buying energy for the coming winter at current wholesale prices. This will apply whatever the companies actually paid.

Suppliers are being allowed to charge more up front this winter so that they can quickly recoup the costs of buying energy in advance.

Ofgem also confirmed at the same time that the energy price cap will be updated quarterly, rather than every six months. So the price rises will come even quicker than before. Again the justification was to allow companies to make enough money to keep shareholders happy.

Ofgem insisted it had to make changes to the price cap to avoid another slew of energy company collapses because of the privatisation model. Since January 2021, more than 30 energy retailers have gone bust.

The costs of dealing with those failures is expected to exceed £4 billion—which ordinary people will be expected to pay through a levy on households’ energy bills.

All this comes as a survey by comparison site Uswitch suggested many people are already falling behind on energy payments. Total debt owed by households is three times higher than in September last year.

Almost a quarter of households owe £206 on average.

Ofgem will announce the October price rises on 26 August. That is the day 115,000 Royal Mail workers are set to strike.

It should be a united day of action across the whole working class with every group of workers who can strike out together and monster marches and rallies.

Labour is virtually silent or actively opposes on the urgent measures needed now. These have to include democratic public ownership of utilities such as energy and a freeze on price rises.

There would have to be above-inflation pay rises in the public sector, a big rise in benefits, abolition of anti-union laws to encourage workers to resist, a rent freeze and much more.