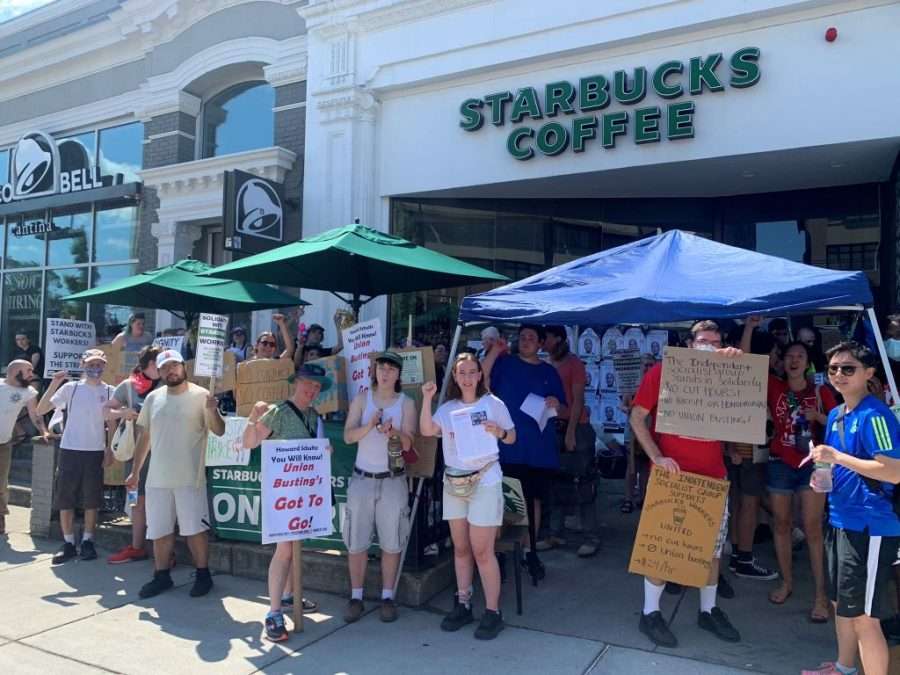 Three weeks ago, in response to what workers say has been particularly flagrant union busting at a Boston Starbucks after their unanimous vote for a union, baristas have gone on strike. That strike is still going.

Starbucks workers and supporters on strike at the store at 874 Commonwealth Avenue in Boston, Massachusetts, on August 7, 2022. (Boston Starbucks Workers United / Twitter)

At about 5:15 AM on Monday, two police officers and a handful of strikebreakers showed up with a U-Haul at the Boston Starbucks store at 874 Commonwealth Avenue to take away patio furniture. Striking workers had been using the chairs and other gear. Organizers say the purpose of the visit was to intimidate strikers, who are maintaining a 24-7 picket at the site.

Baristas at the store have been on an unfair labor practice (ULP) strike for more than three weeks, marking the first open-ended strike of any significant length in the brief history of the national Starbucks Workers United (SBWU) movement. The trigger for the strike was what workers say is the company’s flagrant union busting at the store. Workers and observers around the country have claimed such tactics are central to the company’s response to the hundreds of union drives that have kicked off at Starbucks locations in the past nine months. (In response to the company’s conduct, labor scholar John Logan called Starbucks “one of the worst union busters in recent memory” earlier this summer.)

Spencer Costigan, a shift manager at the Boston store where the strike is underway, and their coworkers unanimously won a union on June 3. Less than a week later, they had a new manager who also manages a different, nonunion Starbucks location.

“We decided to go on strike to get rid of her because she’s terrible,” says Costigan.

According to workers at the store, that manager immediately cut hours, understaffed shifts, and hired five new people upon assuming managerial duties. Costigan adds that this “doesn’t really make sense except when you look at it as a union-busting tactic.”

Their coworker Taylor Dickerson usually works thirty-six hours per week, but those hours have been cut to as low as eighteen. “It makes it really difficult to pay the bills,” she says.

Costigan says the new manager has “honestly just been a bit of a menace.” The manager could not be reached for comment.

In addition to removing their manager, baristas at the store are also demanding regular meetings to discuss staffing and hours in order to have “consistent accountability” from management, in Dickerson’s words.

The baristas at 874 Commonwealth Avenue are often picketing in scorching hot weather, day and night, to ensure that the store remains closed, that no deliveries are made, and to try to bend the $97-billion corporation to their will. Local politicians like Mayor Michelle Wu and Representative Ayanna Pressley and numerous community supporters, from Democratic Socialists of America members to rank-and-file union members like teachers, painters, and school bus drivers, have pitched in. City councilor Kendra Lara replaced the furniture that the strikebreakers took.

Then, last Monday, more than two weeks into the strike, Starbucks workers at four other Massachusetts stores decided to join the Commonwealth location workers on strike.

“If someone says they have a transphobic, racist, homophobic person in their store doing all the things they’re doing and the company will not say, ‘I’m so sorry this experience happened to you, let us fix it’ . . . Wild!” says Bailey Fulton, a barista at a store in Worcester that is on strike.

About 115 Starbucks employees in Massachusetts in total were on strike from August 1 to August 7. But the other four stores didn’t just suddenly engage in strike action out of the blue.

“This was something we were . . . preparing and talking to stores about beforehand,” says Clay.

Conceived of by Clay, the regionally coordinated multistore strike was initially meant to be in response to a different, national Starbucks union-busting policy. The company announced in the spring that it would roll out enhanced benefits like faster accrual of sick days and credit-card tipping to only nonunion and nonunionizing stores. It has also said it would provide smaller and delayed raises to workers at union stores.

Starbucks claims that it can’t offer the new benefits to union stores because they’re a collective bargaining subject. But Workers United, the parent union of SBWU, has waived any objections in a letter to Starbucks CEO Howard Schultz. Members of SBWU say this shows that Starbucks’s real motive was to chill new union drives.

“They’re just trying to freeze out and stall and prevent new stores from unionizing. Because ‘Hey, you get these cool benefits if you stay not unionized,” says Jasper Torres, a shift manager at the store at Coolidge Corner in Brookline that is one of the five on strike.

The first of these benefits for nonunion stores, including greater liberty with dress code and more training programs, as well as some of the pay increases took effect on August 1. That date is the reason why, when Clay heard about the policy changes in May, she thought SBWU should deliver a collective response through direct action at the beginning of this month.

Most of Starbucks Workers United’s coordinated national response to union busting has been through filing unfair labor practice charges with the National Labor Relations Board (NLRB), though many individual stores have struck at a local level, often relying on a strike fund funded by SEIU that Workers United disburses.

While Clay had other ideas, she initially had trouble getting leaders at stores in other parts of the country to bite on the idea of a coordinated direct action: “Instead, I started pivoting and thinking, ‘Okay, how about we show them what it would look like, kind of like a blueprint in our region, and then shoot for Labor Day.”

The New England region of SBWU has a collective action committee to which Clay brought her idea, making sure to acknowledge that not all regional leaders would be ready to call for a strike at their workplace. “The way I pitched it was a ‘buffet of action’: not every store is ready to get the jumbo shrimp, but some of them would like to get a salad,” she says.

Scenes from our last MEGAPICKET — join us today for ROUND 2 at 874 Comm. Ave. from 10am-12pm! pic.twitter.com/SY5EeoRXl1

But when the 874 Commonwealth Avenue store went on their indefinite strike in mid-July, things kicked up a notch. The regional contingent of Starbucks Workers United ended up with a plan for unfair labor practice strikes at five stores in Massachusetts, including the store at 874 Commonwealth Avenue. Pickets were preceded by a collective morning rally outside the federal building in Boston that houses the local NLRB office.

‘Without us, they’re not a company. If the company doesn’t want to work with us, they don’t get money.’

“It’s really powerful seeing how much we control as partners. Because without us, they’re not a company; we’re the reason why they’re a company,” says Adrianna Ross, a barista trainer at a Watertown location that is one of the five stores on strike. “If the company doesn’t want to work with us, they don’t get money,” she says.

In addition to the store currently out and the four that went on strike last week, two more area stores held “sip-ins,” another option from Clay’s “buffet of actions.” In a sip-in, supporters of baristas come into stores and occupy space by ordering no-frills drinks and passively disrupting business while demonstrating solidarity with the workers.

The hundred-plus Starbucks strikers in Massachusetts say they are committed to seeing the open-ended strike at 874 Commonwealth Avenue succeed while continuing to work together on broader issues for the union. “I think when it comes to tangible wins from a strike, I would say the Comm Ave strike is more important . . . ” says Torres, “but I think the August 1 benefits are also really important.”

Starbucks Workers United said in a statement that “partners across the country are taking notice and are inspired by the collective actions happening in Massachusetts.”

Starbucks itself did not respond to requests for comment for this story, so the last word goes to striker Willow Montana from the Cleveland Circle store: “They really have no idea what we’re capable of just yet. They’re about to find out.”