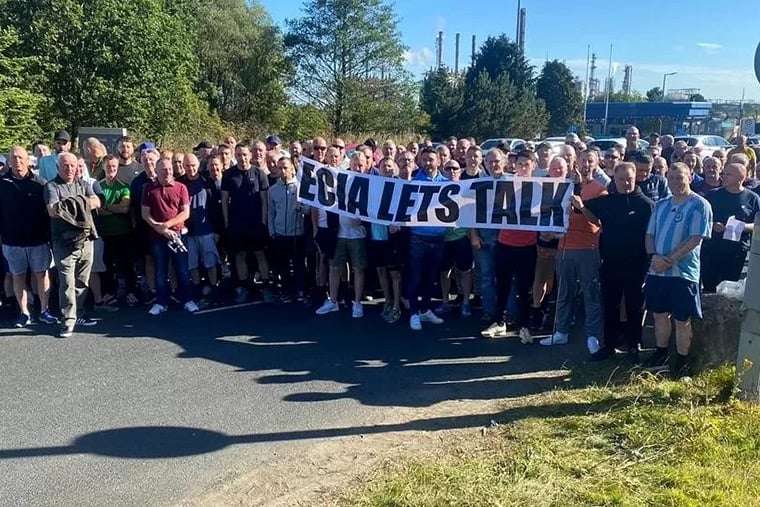 Hundreds of oil refinery workers in Grangemouth, Scotland, have downed tools and stormed out on unofficial strike demanding a pay increase.

Around 250 workers joined a picket line outside the Grangemouth refinery, a petrochemical plant owned by a joint venture between PetroChina and billionaire Jim Ratcliffe’s Ineos Group.

The workers from five different contractors stood across the A904 road, temporarily blocking tankers from accessing the industrial site. The action was in response to the Engineering Construction Industry Association’s (ECIA) “refusal to recognise the cost of living crisis”.

Grangemouth refinery supplies over 60 percent of the petrol and diesel for forecourts in Scotland. Last year Ineos Group recorded gross profits of £2.95 billion.

The strikers have vowed to return to picket lines every two weeks until a new pay deal is accepted.

The Grangemouth action was part of a protest at several sites across Britain over pay for engineering construction workers covered by the National Agreement for the Engineering Construction Industry (NAECI).

The workers distributed a leaflet that read, “Some of us worked throughout the pandemic to keep the country running, some of us were made redundant. We accepted changes to the agreement and took a pay freeze to help the employers and to keep the industry moving during lockdown.

“Now we are asking the ECIA to come back to the negotiating table because of these once in a lifetime events. So far, they have point blank refused. We cannot allow this cavalier attitude to continue.”

The Grangemouth workers have a history of militancy. Having suffered a terrible defeat in 2013 it’s great to see the workers once more making a stand.

Ineos threatened to close the plant and cut 800 jobs. The Unite union accepted some cuts.  Workers lost their final salary pension scheme, and bosses imposed a three-year pay freeze and worse contracts. Others fared worse and lost their jobs.

Unite also accepted not to strike for at least three years. The spirit at the plant, which has been rebuilt by actions since 2013, now is great to see.