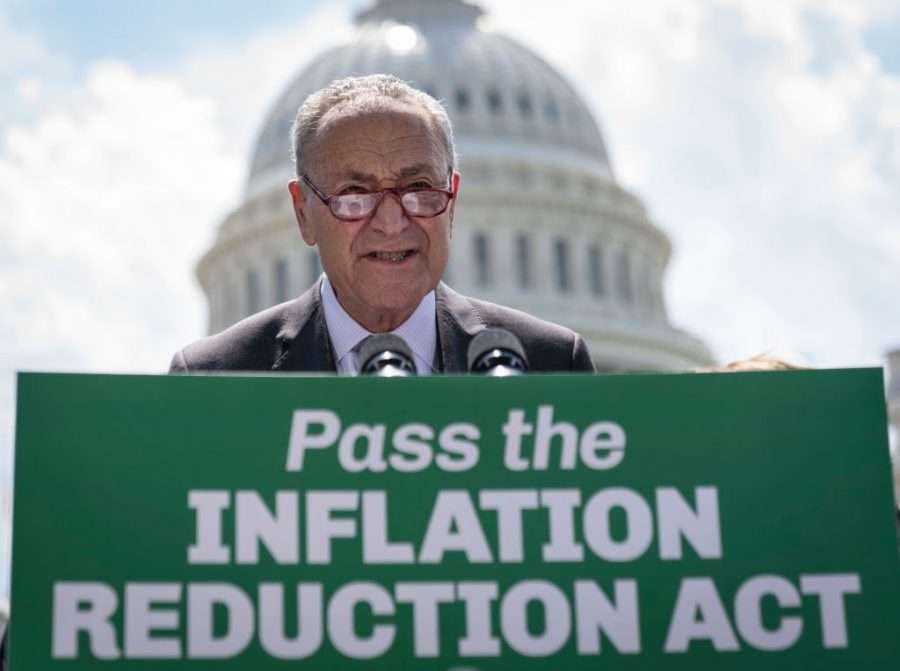 Have you heard? All criticism of the Inflation Reduction Act can be boiled down to moralizing hippies and a bitter, “Internet-poisoned” left. This is absurd: deflecting from the bill’s flaws does a disservice to the climate fight.

Senate majority leader Chuck Schumer (D-NY) speaks during a news conference about the Inflation Reduction Act outside the US Capitol on August 4, 2022. (Drew Angerer / Getty Images)

The Inflation Reduction Act (IRA) is at once a massive fossil fuel industry giveaway, a historic but inadequate investment in clean energy, and our best hope for staving off planetary catastrophe. In other words, discussion of it would seem to call for a bit of nuance.

Not so, according to Slate’s Jordan Weissmann. In a widely circulated piece purporting to explain “why internet leftists are so pissed about Democrats’ historic climate bill,” Weissmann explains why, if you’ve heard any concern or criticism about the IRA these past few days, you shouldn’t worry — it’s safe to block your ears and turn off your brain, because these are simply irrelevancies cooked up by a bitter and terminally online left.

In Weissmann’s telling, “the internet-poisoned left” has written off the IRA as a mere fossil fuel giveaway that won’t move the needle on climate, and this “chorus” has been “led” by Don’t Look Up creators Adam McKay and David Sirota. Their criticisms are simply the product of a “kneejerk resentment toward the Democratic Party that’s endemic among the online left,” combined with the sour grapes among “some of the most dedicated climate activists” that they’ve “lost a basic philosophical battle over how best to combat climate change”: namely, that we need to urgently stop investing in fossil fuels and keep as much of them in the ground as possible as we transition to renewables.

“The supply-side approach to climate advocacy has always seemed to involve a dose of moralism, a sense that fossil fuels are inherently immoral and ought to be cut off wherever possible,” muses Weissmann. For him, it’s simply “the most hardcore corners of the movement [that] are deeply attached to supply-side solutions.”

In other words, there’s no need to grapple with the IRA’s complexities, build momentum for further federal action, or envision the next stage of public pressure to undo its most damaging provisions. We’re done here. Go back to sleep.

Every part of Weissmann’s case is uninformed or misleading. First, the idea that criticism of the bill comes only from a hard core of internet-hardened leftists, or that it’s being “led” by McKay and Sirota, is nonsense. Rather, the criticism has been led by major environmental organizations like Greenpeace. I know, because I actually talked to climate advocates when the bill was unveiled two weeks ago.

Weissmann does briefly gesture at some of these groups, but he soft-pedals their opposition. He doesn’t note the fact that literally hundreds of organizations, including Greenpeace and Food & Water Watch, urged Biden to strike out the IRA’s fossil fuel favors last month, or that just yesterday, a variety of groups criticized the bill, including the Center for International Environmental Law, which warned that “solving the climate crisis requires eliminating fossil fuels.” Whether you agree with their analysis or not, it’s groups like Climate Justice Alliance that determined the bill’s fossil fuel provisions outweighed its benefits, with one calling it “smoke and mirrors” — not the director of Talladega Nights.

Even if you disagree with this view, an honest appraisal would at least grapple with the counterarguments. Unfortunately, Weissmann doesn’t give his readers a chance to consider these.

He doesn’t mention the bill’s almost total lack of action on the single largest source of emissions, transportation. He doesn’t inform his readers that, as even Forbes has warned, the bill’s tying of solar and wind projects to mandatory oil and gas leases creates a cluster of veto points over the expansion of clean energy. He evidently didn’t talk to Food & Water Watch’s Mitch Jones, who cautioned that this could also halt some wind and solar projects on private land. He doesn’t note how modest the bill’s emissions cuts actually are, nor how paltry some of its spending commitments are when put into context. He doesn’t discuss its no-sticks-only-carrots approach, which even the leading outside expert behind the bill said last year wasn’t enough to transition from fossil fuels on time.

Weissmann, no stickler for originality, paints the coalition of the bill’s critics as a collection of unreasonable hippies who oppose fossil fuel exploration just because. From the picture he presents, you would hardly guess that the International Energy Agency warned last year that new oil, gas, and coal investments had to end immediately to keep the world within 1.5 degrees warning. He doesn’t mention the 2015 warning from a group of scientists and economists that 75 percent of known fossil fuel reserves have to stay in the ground. He doesn’t tell readers about the UN secretary-general’s warnings that new fossil fuel investment is “delusional” and “doesn’t make political or economic sense.”

You wouldn’t know from reading Weissmann’s piece that this point — that new fossil fuel infrastructure is incompatible with the world’s climate goals — has been made repeatedly by leading scientists, or that it was forcefully advanced just this year by the Intergovernmental Panel on Climate Change. So much for listening to the science.

There is one omission for which we can forgive Weissmann: his failure to mention that the news outlet he works for is also, apparently, a mouthpiece for exactly the kind of anti–fossil fuel moralizing driven by left-wing hatred of the Democratic Party that he decries. Just look at all the Slate pieces expressing dismay over Biden’s expansion of drilling, praising disinvestment efforts, criticizing the massive Gulf of Mexico oil and gas fire sale the IRA revives, doubting the “clean hydrogen” solution that this bill invests in, poking holes in the very kind of EV-heavy strategy on which the IRA leans, and even advocating that oil companies be nationalized so they can be shut down.

That Weissmann is so giddy over the apparent collapse of efforts to end fossil fuel production — the cause of the very crisis the IRA is meant to combat — is bizarre enough. But to do it when scientists, experts, and writers deemed credible by his own employer have repeatedly stressed how essential that step is, raises it to another level of absurdity. It’s hard to shake the impression that the whole piece is an elaborate case of projection on Weissmann’s part: a kneejerk and uninformed swipe at his online nemeses for being kneejerk and uninformed and too online.

The dispiriting upshot is that readers of this piece looking for enlightenment on the controversy will come away thinking that continued oil and gas exploration and production is just fine and that radical action is no longer needed — when in reality, the bill’s flaws make this kind of action more urgent.

It’s sad that something as critical as staving off climate disaster has to be refracted through the prism of petty Twitter grudges and intra–Democratic Party skirmishes, because it does us all a disservice. Weissmann is right that Internet brain-poisoning has depressingly infected this debate. But the main vector of transmission is not to be found among the IRA’s critics.