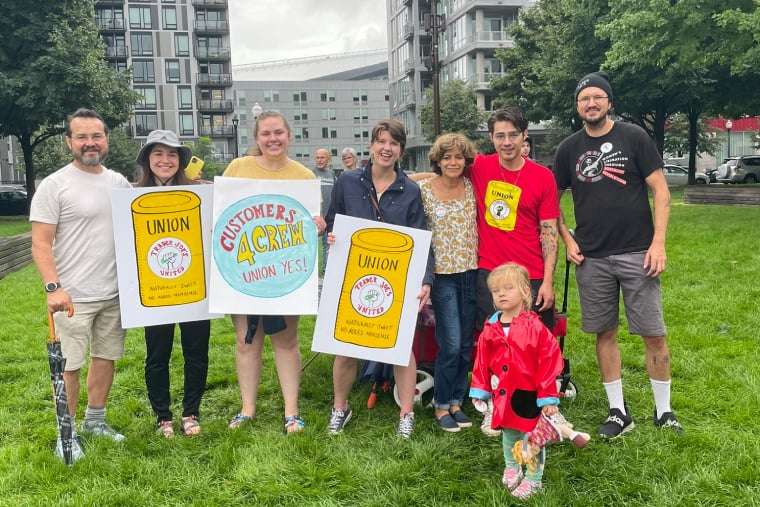 It’s not just in Britain that workers who are seen seen as “unorganisable” are showing they can resist the bossees and unionise.

From Amazon to Starbucks, workers across the US are building unions and taking action. Now workers at supermarket giant Trader Joe’s are getting organised.

Sarah Beth is a Trader Joe’s worker in Minneapolis. She told Socialist Worker that workers at her store are “excited” to hold a collective vote on whether to set up a recognised union later this month. “There are three main reasons why we are unionising. The first is pay. The second is benefits including healthcare and also safety on the job.”

“Trader Joe’s hires people on ‘competitive wages’ but doesn’t raise the pay of those already working there. This means someone who has worked there for two or three years earns less than someone who has just started. We want a fixed rate of pay that is livable, and so that people don’t feel like they are living pay cheque to pay cheque.”

“Trader Joe’s was for some time known as a good company with a higher standard that treated workers better than other grocery stores. But over the years, good health care and benefits have been eroded.

“Also we sometimes don’t feel safe on the job. We have asked time and time again for the proper safety training to deal with dangerous situations in store, but we’ve been refused.

Sarah Beth added that the disintegration of conditions and pay started to happen during and after the pandemic hit. She added that this is not unusual and that workers across the US realise they need to fight for better.

“In general there’s a lot of inequality but also discontent in the US,” she said. “After Covid, things were broken. It really changed the way people viewed labour.

“Of course, trade union membership in the US is very low and has been even more eroded by the union-busting of big companies. But people now see being part of the union as a solution. So there’s a resurgence of people taking ownership and organising.”

Sarah Beth also added that the radicalism seen during the uprising in Minneapolis after the murder of George Floyd has spilled over into trade union struggle.

“One thing that has helped us in our store is we have radical young people, who have no loyalty to corporations. They truly question the system and want to change it. We will vote on whether to unionise later this month, and I’m very confident we will win.”

Only a small number of Trader Joe’s branches are currently pushing to unionise, but Sarah Beth said there is real potential for it to spread. Some stores have elected to be part of the Trader Joe’s United union. Others have decided to be part of larger supermarket unions.

Already workers at Trader Joe’s in Hadley, Massachusetts, voted to unionise into Trader Joe’s United, voting by 45-31 to join the union.

This is only a beginning for Trader Joe’s workers in the US, but workers are clear that union busting and anti-trade union laws won’t stop them anymore.