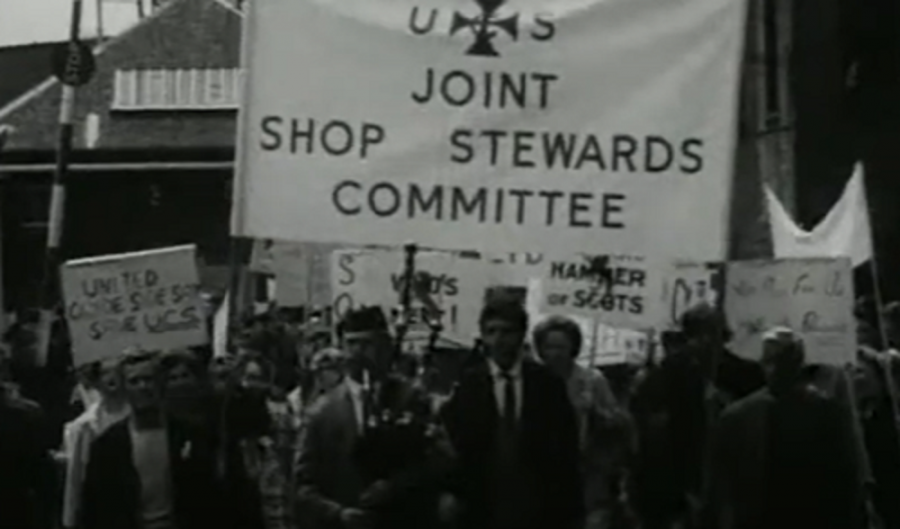 Amid the struggles of the the 1970s, radical filmmaking group cinema action brought the fight for working-class liberation to screens in trade union halls and work canteens across the country.

In the 1960s Britain saw the birth of a number of radical film collectives. Groups like Amber, the Leeds Animation Workshop, and the Sheffield Film Co-op were formed to create ‘oppositional film’: independent cinema that spanned documentary, fiction, and animation to capture remarkable moments in the history of the labour movement.

One such collective—cinema action—is now little known to those outside its inner circle. But the group successfully produced more than a dozen films over twenty years, covering a range of subjects. As filmmaker and long-time associate Chris Reeves reveals, the story of cinema action’s conception and eventual demise is a fascinating one.

‘I went to film school and was politicised by events in the early seventies—both fighting against the National Front and the international struggles that were going on,’ he explains. ‘I was introduced to the group, but I wasn’t part of the inner core—that was really Gustav Lamche (‘Schlacke’), a guy from Germany, Ann Lamche, and later Eduardo Guedes.’

Before launching cinema action, Gustav and Ann Lamche lived in France with their two children. They resided in Paris and would become heavily involved in May 68, a period of civil unrest, industrial strikes, and student protests across the country.

‘Ann was the English voice of French radio, which was occupied in solidarity with the students,’ continues Chris. ‘So she was quite high-profile, a target of the state… I believe Schlacke got shot in the foot by the French CRS [Compagnies Républicaines de Sécurité, part of the police force] during a demonstration. Later the family were rounded up: they were part of the first group of so-called ‘foreign agitators’ who were deported by the Minister of the Interior in May ’68. It was traumatic—they were separated from their children, and they thought they would never see them again.’

The family were deported to England—but not before acquiring a film on the events unfolding in France. Once they were settled, they began showing the film to groups of trade unionists across the country. This sparked an idea that would later become cinema action.

‘They fell in with a couple of British filmmakers—Richard Mordent, Humphrey Trevelyan, and Marc Karlin. Trevelyan and Mordent had money—they had the resources and could buy film equipment. When I arrived, in the early 1970s, the core members of cinema action were squatting in Swiss Cottage, in a large but narrow building with four floors. it was stuffed full of film equipment!’

They would soon be joined by Eduardo Guedes, a Portuguese leftist filmmaker with aristocratic connections. ‘He had actually been part of the film industry in Portugal,’ explains Chris, ‘but he was on the run from the military because he had refused to fight in the colonial wars that in which Portugal was engaged. But he was a proper filmmaker: he used to organise informal classes about camera and sound operating, editing, and the whole film-making process. His arrival improved the quality of cinema action’s films.’

The group had now blossomed into a fully-fledged collective. Membership was fluid—not everyone who assisted on projects was a member—but one thing was constant: the radical nature of the films produced.

‘It was in the heady days of the early seventies,’ says Chris. ‘There were all kinds of rank-and-file trade union struggles, student occupations, a wave of anti-colonial struggles, working-class squatting, and a feeling that anything was possible.’

In total, cinema action made around fourteen finished films, most of which are documentaries. Many are short, like Squatters and Arise Ye Workers, which focused on the dock strike of 1972 and the imprisonment and release of the Pentonville Five. Others, like Class Struggle: Film From The Clyde, an epic documentation of the 1971 work-in by shipbuilders on the Upper Clyde, border on feature-length. The group also edited an English version of a Portuguese film, Viva Portugal, originally made by associates of Eduardo in Europe about the Portuguese revolution of 1974.

Reflecting the subject matter of their films, the group held values of empowerment at its heart. ‘It was a generous group,’ Chris explains. ‘They were very encouraging to young filmmakers and would allow many people to use the equipment and all sorts of things were being made there.

‘It was also non-sectarian. There were people of all sorts of left persuasions involved: anarchists, Communist Party members, trade union associates—like Dave Douglass, a miner from Doncaster, May Hobbs, an organiser and tenants’ leader, and Roger Sutton, who is now the treasurer of the Greater London Association of Trade Union Councils. It was a time when left activists, students, and trade unionists were mixing more, perhaps, than they do now.’

To cement these values, the collective drew up a constitution that would guide all aspects of their craft. ‘It more or less said the films need to be emancipative, and that there should be no voice of authority in them, meaning no commentary or voice-over,’ Chris explains. ‘I must admit, this can make some of the films a little confusing: they can be kind of heavy-going, especially for modern audiences. On the surface at least, the group was anti-auteurism—none of the films had any technical credits. Another anti-authoritarian aspect of the group was their refusal to use capital letters—so it’s cinema action, not Cinema Action!’

Most of the documentaries were finished after the event, he continues, so they became more historical in tone. But there were exceptions. ‘Upper Clyde Shipbuilders 1 was made quickly with trade union support, so that was really useful in the campaign to raise money for the people occupying the shipyards,’ Chris says. ‘Screenings were held in trade union halls, on building sites, and in work canteens across the country.’

As interest in and support for the group increased, cinema action became more legitimate in the filmmaking world. In the late 1970s, they began paying rent to Camden Council on their newly renovated Swiss Cottage premises, and they received money from the Arts Council and the British Film Institute (BFI) and, eventually, Channel Four, thanks to Ann’s tireless fundraising. Soon, they were producing, editing, and screening films in their own space. As the 1980s progressed and Britain’s trade union culture was worn down, however, the group would move in a different direction.

‘In 1980, cinema action got some money from the BFI to make So That You Can Live. It was a time when deindustrialisation was becoming a big reality, and the film was about the transition of a Welsh community from the industrial to the unknown, asking questions about what was going to happen in the future.’

Some people in the group then began branching out into feature films. One, Rocinante, featured John Hurt and Ian Dury; another, Bearskin, starred Tom Waits. ‘Neither were well received,’ Chris says. ‘After that, Schlacke and others managed to get funding from the BFI to make a film about the Social Contract between the unions and the Labour government—but because things were going badly for the labour movement, the film didn’t take off.’

With Thatcher in, the group found it difficult to deal with the downturn. Things began to splinter: Ann and Eduardo left the country in the late eighties, while other members found employment elsewhere. Finally, in 1991, mounting rent and tax debts led to cinema action’s eviction.

Chris was there the moment it happened. ‘All the film and audio rushes, the equipment and the finished films were seized. There was an auction, and we managed to get some of it back, but the BFI got a lot of it—all the equipment and most of the films, many of which they then binned. It was a real scandal: they were only interested in finished films, so all the partly finished projects were thrown away.’

Despite this downbeat ending, the story of cinema action isn’t quite over. Chris is now working alongside Peter Keighron and Margaret Dickinson to create a website that will act as an archive for the group’s radical repertoire—and as a filmmaker and documentarian himself, he’s hoping to create a film about the collective in the near future.

‘It really was a remarkable time,’ Chris reflects. ‘When we did screenings in union halls, I think that seeing those struggles represented on screen strengthened people’s confidence. It helped them build a movement.’ Concluding our interview, he sums things up with a quote from former cinema action member Maxim Ford: ‘“History is made by those who turn up, and cinema action turned up.”’