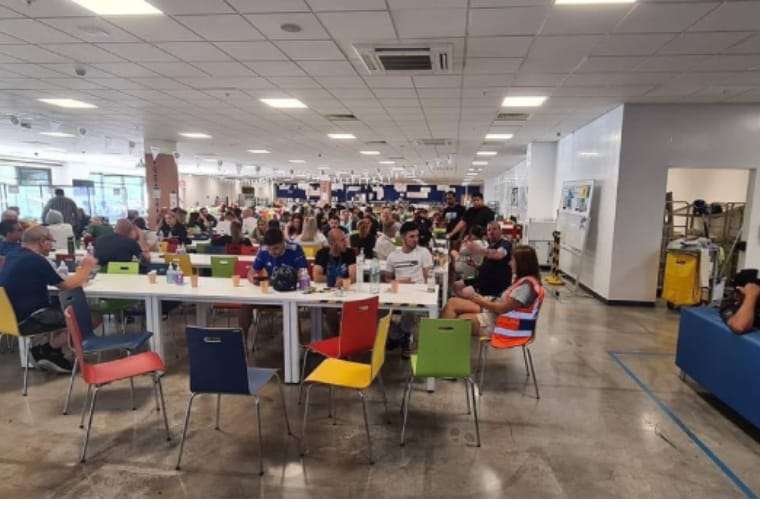 The revolt at Amazon goes on—workers struck at the Bristol BRS1 centre on Thursday morning.

Wildcat walkouts, slowdowns and strikes at Amazon fulfilment centres have continued in several areas despite intimidation from managers and bosses. Dave*, who works at the BHX4 fulfilment centre in Coventry, told Socialist Worker, “Managers were telling us if we do protest, we won’t be paid from the minute we leave our work areas.”

He added that managers are even trying to use “divide and rule” tactics, to ensure that workers don’t take action.

“Managers are telling some workers they’ll be rewarded if they keep working. Some are also being given easier jobs than others. Of course, people are getting rattled by this.

“I feel like the managers are trying to get us to go against each other instead of the issue of pay.”

But despite all this, Dave said that workers still want to fight as conditions worsen at Amazon.

“People are still angry,” he said. “The British arm of Amazon made £20 billion between January and June this year.

“Things have got a lot worse since Jeff Bezos decided he wants to play astronaut. The new CEO has no idea what goes on in the warehouses. And this lack of care plays out in our fulfilment centre in Coventry.

“On Wednesday a staff member had to be taken away in an ambulance, but the board didn’t count it as an incident.

“This job is slowly becoming a rapid descent into hell, but most of us can’t afford to leave,” he added.

Workers at the Coventry and Tilbury deports sparked a wave of sit-ins and walkouts last week after hearing they would not receive a pay rise of more than 35p or 50p an hour.

In several depots, workers have now been told they won’t receive a pay rise at all. Anger at this news quickly spread to other fulfilment centres, from Bristol to Leicester, and turned into action.  More than 200 workers at the depot in Swindon struck and protested in the canteen on Monday of this week.

One worker said, “The management has announced they won’t approve the pay rise or change their decision and say they can’t help us.

“Amazon is a very profitable company, and we deserve fair pay. Just 35p is next to nothing in a situation like this. That works out to £700 a year, which will cover maybe two months of energy bills.

“It’s worrying me because mortgage rates have gone up, as has the price of fuel, groceries and energy. We have families—how will we pay the bills?

This means that they picked only one package an hour.

Dave said he expects a new wave of anger in Coventry and elsewhere when the new “pay rise” comes into operation next month.

“Hopefully once September comes and we actually see how badly we’ve been screwed with the “raise”. That’s when it really starts,” he added.

Dave and other Amazon workers are making it clear that they won’t allow this corporate giant to get away with paying them pennies anymore. Workers must keep putting pressure on Amazon, escalate strikes and call for staff in more fulfilment centres to join them.

Amazon workers joining a coordinated strike of bus drivers, rail workers, BT workers and Royal Mail workers, who all have mandates to strike, would send a strong message to the bosses and the Tories.