Home / News / A Safe Commute Is a Worker’s Right 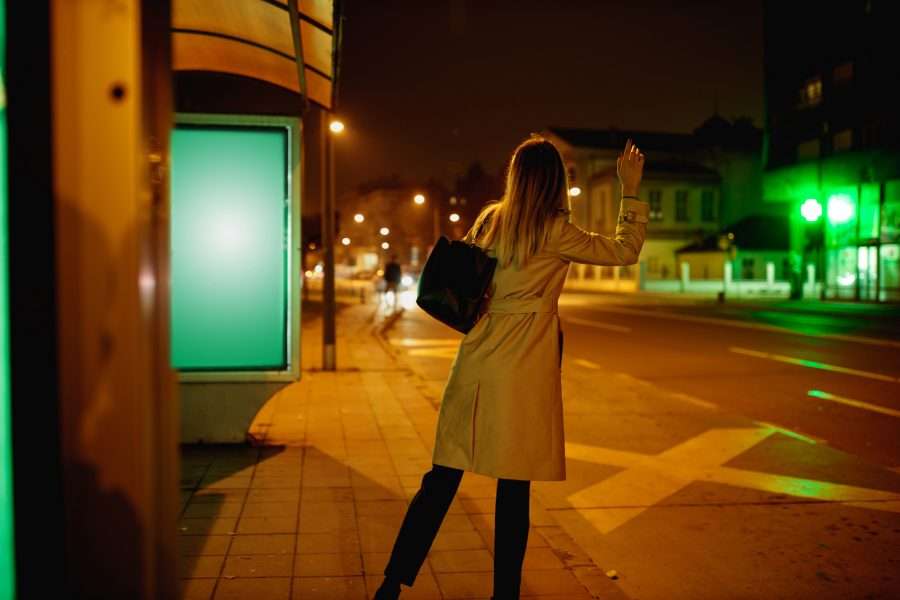 With transport costs spiralling and decimated services unreliable, low-paid workers too often feel afraid leaving jobs late at night. It should be up to the boss to make sure staff get home safe.

Unite the union’s Get Me Home Safely campaign is calling on local governments to extend employers’ duty of care to embed safe transport home policies for all workers. (Dimensions / Getty Images)

‘I’ve never been relaxed when leaving work at night,’ twenty-three-year-old Becky tells Tribune. Before becoming a student support officer, Becky had always worked in hospitality, an industry plagued by unsociable hours: hospitality staff working on the close can usually expect to finish between 8PM and 5AM.

One night, while working as a barista at a well-known coffee shop chain in Manchester, Becky was threatened by a customer. ‘He’d come in multiple times before, and I thought he was homeless, and had given him a free drink or food on my way out,’ she recalls. But this time, when Becky told him she had none to give, he became aggressive. ‘I told him to get out and threatened to call the police, and he told me he’d wait for me,’ she continues.

When Becky told her manager what had happened, they were dismissive and simply said she should leave out the back, which she did. He was still there. ‘I was terrified,’ she says. She was followed until she got to the bus stop, where she was able to seek refuge in conversation with a stranger. ‘I always look around my shoulder, like every woman on the planet,’ she continues—but this experience added to that fear, and ultimately prompted her to transfer to a different location.

Becky is not the only one with a harrowing story of leaving work late. Ashley Humphreys, a bartender working in London, leaves work at around 1AM on weekdays and anytime between 4AM and 5AM on weekends. She will either cycle to and from work, or take the overground train there and the bus home on weekends. ‘With the lack of a night tube, that bus often turns into an Uber,’ she says, both for convenience and for her safety. As a trans woman, Ashley says she has had some ‘uncomfortable moments’ while travelling both to and from work: ‘This varies from verbal abuse to the threat of violence, and even worse, an experience I had last year where I was physically attacked and was told I was going to be killed.’

For all workers who finish their shifts late at night—and particularly for women, LGBTQ+, and minority ethnic workers—the risk of violence is all too prevalent. Incidences of public sexual harassment are on the rise, and given the extremely high-profile murders of Sarah Everard, Sabina Nessa, and Zara Aleena in the past two years, it’s no surprise a BBC poll found that sixty-six percent of women are afraid to walk alone at night. Hate crimes are also up: Home Office figures show homophobic attacks in England and Wales have risen from 8,569 in 2016/17 to 17,135 in 2020/21, while hate crimes against transgender people have jumped from 1,195 to 2,630 in the same period; racially and religiously aggravated offences recorded by police also hit a new high in 2021. Despite all this, there is still no duty of care placed on employers once workers leave the premises.

This is a situation Unite the union’s Get Me Home Safely campaign, launched earlier this year after a Unite organiser was sexually assaulted when her boss refused to provide transport home from her hospitality job in Scotland, is working to change. The campaign is calling on local governments to extend employers’ duty of care to embed safe transport home policies for all workers, and make free transport home for staff a prerequisite for all new liquor licences—a demand that has already been won in East Dunbartonshire, North Ayrshire, and Newcastle.

Amid a spiralling cost of living crisis and widespread attacks on workers’ terms and conditions, Get Me Home Safely is especially concerned with workers on low pay, for whom spending wages on expensive taxis is only rarely feasible. As Ashley says, if she were to choose taxis over public transport and cycling more regularly, she would be spending a quarter of her weekly wage on transport alone: at a time the prices of everything is spiralling ever upwards and wages are lagging behind, those kinds of costs simply aren’t sustainable for workers to incur.

But as Get Me Home Safely acknowledges, the difficulties workers have getting home safely at night are also the result of a sustained assault on public transport services—or more specifically, ‘decades of deregulation, legislative failure, and the purely commercialised and largely unregulated bus system which has resulted in thirty percent of bus routes being cut, and 4,000 bus drivers lost to the sector,’ in the words of Irina Do Carmo, a leader on the campaign. Organisers are therefore also calling for better CCTV, practical training on gender-based violence for transport workers, and municipal ownership of buses, so they can work for the people who use them—plus improved public bathroom facilities, particularly for bus workers themselves.

Bryan Simpson, an organiser for Unite’s hospitality branch, tells Tribune that in practical terms, the campaign is focused on organising hospitality workers and ‘providing them with the training, advice, and resources to collectively win these demands from their employer.’ Unite is in talks with ‘a number of high-profile employers’ about them signing up, he continues, following pressure from their workforces. As just one example of the progress collective organising can make for hospitality workers’ safety, legendary London venue Dalston Superstore has recently agreed that workers should be able to invoice taxi rides home as expenses. ‘Between now and Christmas,’ Bryan continues, ‘our main priority from an organising perspective will be to win safe and free transport for as many late-night workers as possible through industrial pressure, political lobbying, and legal action against the worst employers.’

That this initiative is proving so popular is also a sign of its necessity: it’s a ‘shining example’ of unions fighting for workers, Ashley says. As a looming recession threatens low-paid workers with even more suffering, ensuring that staff are at least able to get to and from their jobs without fear of violence or huge financial cost seems the minimum employers can do. As Ashley notes: ‘It’s everyone’s right to not be fearful of something so simple as returning home from their places of work.’