Home / News / In a Climate Crisis, Privatised Water Is a Disaster 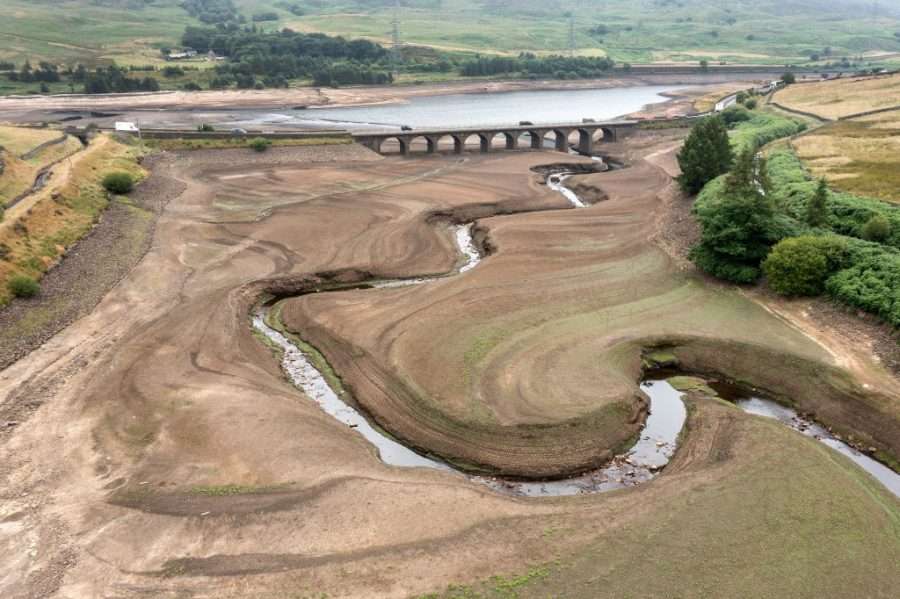 As climate change intensifies, droughts like the present one hitting Britain are only going to become more common – and we can’t afford profiteering water companies leaking 2.4 billion litres of water every day.

As the UK endures another bout of extreme heat, temporary water rationing measures further demonstrate that how unprepared we are to deal with the effects of climate change. July was the driest on record since 1935. November 2021 to July 2022 was the driest eight-month period since 1976. Demand for water has surpassed all previous summers. Into August, heatwave becomes drought as the cumulative effects of recent months come to a head.

Millions across the country are now subject to water rationing after a flurry of announcements from water companies. They have introduced hosepipe bans which prohibit those living in relevant areas from using hosepipes to water gardens, fill up paddling pools, wash cars, or clean windows. The South has mostly been affected, with South East Water (covering Kent and Sussex), Southern Water (covering Hampshire and the Isle of Wight), and Welsh Water (mostly covering Pembrokeshire) introducing the restrictions. Thames Water have also said that it will introduce a ban covering London and surrounding areas soon, and Yorkshire Water has now announced that for the first time in twenty-seven years its five million customers must adhere to a ban as reservoirs are less than half full.

But the necessity of water rationing is not just down to the shock of climate change-induced heat. It is also a result of the water companies’ own negligence. Around twenty percent of our water supply is lost through leaks. Across the country, that accounts for approximately 2.4 billion litres every day. Under Thames Water’s jurisdiction, the rate of loss rises to about twenty-four percent.

Leaks usually waste a steady supply of water, but sometimes they lead to crisis situations. In North London recently, a thirty-six-inch mains pipe burst, causing flooding and sinkholes to form on roads in a residential area. After the devastation of extreme flooding last summer, it’s perverse that more homes and businesses should be hit by water damage amid this summer’s drought.

The private water companies are failing to maintain the vital public infrastructure with which they’ve been entrusted. Repairs to leaks are not undertaken until these crisis moments, and the water companies are only aiming to halve the number of leaks by 2050, a target that accepts that billions upon billions of litres of water will continue to be wasted. All the while, the private water companies warn of the possibility of even stricter rations, which could be extended to farmers and other key economic activities as drought becomes more common and more intense.

The privatisation of water authorities by Margaret Thatcher in 1989 created a racket in which the profiteering beneficiaries have been free to siphon off money to shareholders and bosses. There is no imperative to invest in upgrading infrastructure, whether repairs or adapting to a changing climate. Instead of taking action, bosses have given themselves bonuses amounting to around £27 million over the past two years: the boss of Thames Water, one of the worst offenders, took home a £727,000 bonus alone on top of her £2 million salary last year.

While these profits go into private pockets, the costs of our failing water system are left with the public. We collectively pay £2.3 million more per year for water than if it had never been privatised.

This dynamic is indicative of elitist climate adaptation where measures to adapt to greater extreme weather are generally superseded by the private sector’s refusal to invest. Where adaptation measures are forthcoming, they prioritise safeguarding profits over securing the wellbeing of most people. Instead of collective security in the face of climate disaster, we see greater injustice and widening inequality. Over the coming years, access to water during times of extreme heat will characterise the divide between the rich and poor.

In response to this crisis, the Liberal Democrats have called for a halt to water company bosses’ bonuses. They say that its unfair that they are rewarded until the leaks are fixed. This is true, but we need to go much further. It is not enough to demand temporary respite from the corporate parasitism while keeping the system intact. We need an Opposition demanding a water system which structures out the possibility of bosses and shareholders siphoning money out of public services, full stop.

However—as with the pandemic, cost of living, and all other major crises during Starmer’s so-called leadership—the Labour Party has been missing in action. Labour activists and backbench MPs have called for a bold response, arguing that water companies should not be run for profit and must be brought back under state ownership. But Starmer’s frontbench flounders, still fighting internally over whether public ownership should even be on the table.

This should not be a point of debate. Like all utilities providing basic needs, water must be run in the interests of people and the planet not private profit. A 2017 poll showed that eighty-three percent of the British public supported this move. A compelling Opposition could surely drive that number up further by communicating its necessity during a crisis.

If we do not remove the profit-motive from our water system, we will not see investment in infrastructure upgrades. We will see more homes and businesses damaged as pipes burst, and as extreme weather intensifies, we will not be able to guarantee access to water as a basic right during drought. Its scarcity will have a knock-on effect across the economy, disrupting the production of food, energy, and beyond. Without nationalisation of water, it will be impossible to prepare for the worsening effects of climate change still to come.