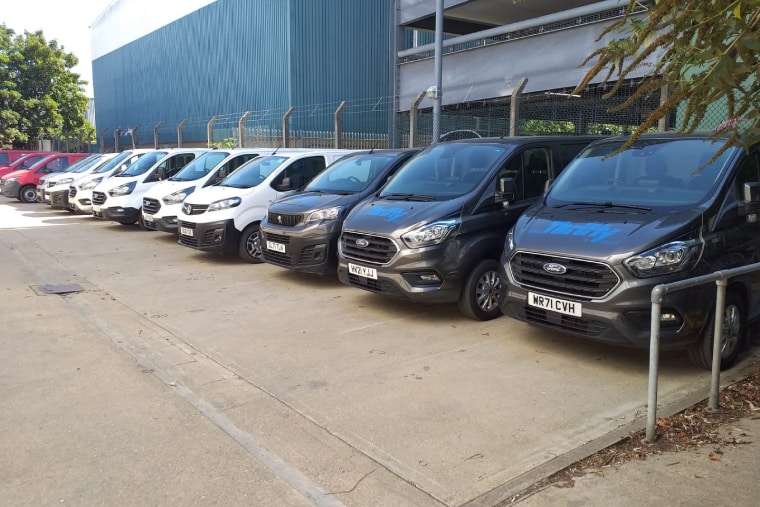 Vans for use of agency workers during the strike lined up in Nottingham last week (Picture: @CWUNEWS)

As 115,000 postal workers prepare to walk out for four days for pay in August and September, Royal Mail bosses are doing all they can to limit the strike’s effectiveness. Managers are plotting to train agency workers and build a scab workforce to try and undermine the strike.

It’s an attempt to use the new laws recently passed by the Tories that freed up employers to use agency workers without any restrictions during disputes.

Royal Mail hopes the sight of people going into work and doing strikers’ jobs will demoralise those on the picket line. And the firm may even set up scab centres wholly staffed by agency workers.

The regional secretary for the CWU union in the Midlands, Mark Harper, told Socialist Worker that these tactics are nothing workers “aren’t used to.” And he added that will in no way blunt the strike’s effectiveness.

“We have over 100,000 workers walking out—there’s no way they will be able to cover all our work,” he said.

“On Monday last week, white rental vans turned up to our mail centre in Nottingham—not using the normal red ones, that would be too recognisable. Rather than give us a pay rise, they want to waste money on agency workers and vans.

“Managers are trained to drive larger vehicles, and agency workers will do only time‑sensitive stuff—it will barely scratch the surface.”

The vans appear to come from Thrifty cars. Unions should campaign to end any contracts with them and turn up at their offices if they continue knowingly to supply the scabbing operation.

Ben, a CWU member in Nottingham said the process will be “chaos” adding that “it shouldn’t be allowed.”

He said that using agency workers now is a glimpse of the future the company wants.

“Royal Mail is no longer a public service. It’s all for the shareholders,” he said.

“Agency workers and zero hour contracts are what the Tories want. We worked through the pandemic. Now they’re doing this to us. It’s all their idea to save costs—to break the structure of the workforce.”

And agency workers aren’t automatically scabs. Mo, a postal worker in Walsall, told Socialist Worker, “Myself and the union reps will still try to educate them when they try to cross the picket line.”

Mark added, “We have casual and agency staff in the CWU— some are using their days off on strike days. It means Royal Mail is fishing in a small pond for these workers.”

One agency worker, David tweeted, “I’ll be blocking the days out, so I don’t get shifts on the strike days.”

Large numbers, mass pickets and solidarity, are the postal workers’ strengths, and no agency workers will break that.  If bosses set up scab centres, the union should call mass pickets at them for strikers and their supporters.