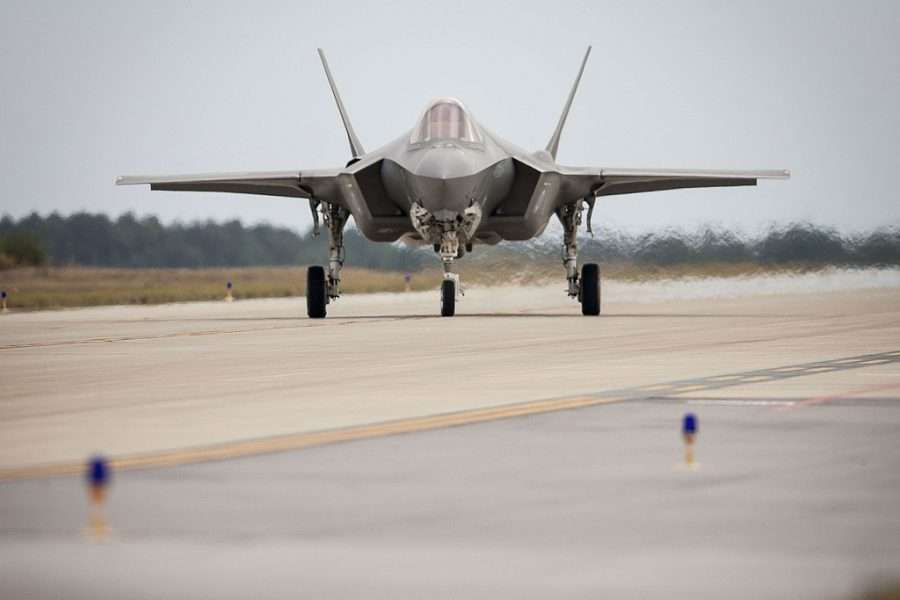 The F-35 fighter plane project is a complete failure. But if it ends up on the congressional chopping block, Lockheed Martin will do everything in its power to line up another trillion-dollar weapons manufacturing contract in its stead.

Two facts about the F-35 fighter plane are nearly universally recognized: first, the plane has capabilities never before seen in a fighter jet, and second, it’s a complete disaster.

At a record-breaking cost of $1.75 trillion in public money, with hardly anything to show for it, the F-35 project is increasingly hard to rationalize. Even top government officials are now criticizing it, posing the question: Could the project be nearing its termination? If that happens, we must be ready to demand that no similar project takes its place — even though weapons manufacturers will do everything in their power to line up a new trillion-dollar contract.

Pentagon contracts are convoluted and confusing, but suffice to say that weapons manufacturers like Lockheed Martin have a lot to gain from obtaining them and little accountability if the projects don’t go as planned. Consequently, these contracts regularly see cost overruns on top of already massive price tags.

The F-35 project accelerated out of a similar boondoggle. In 2009, when former secretary of defense Robert Gates terminated the costly F-22 program, the United States decided to buy more F-35s. This way, though the F-22 program was canceled, money would still flow uninterrupted from the Pentagon to Lockheed Martin.

Based on this contract, it was projected that the United States would procure 1,700 F-35s by 2025. Now, due to engineering and manufacturing difficulties, these procurements are running extremely behind schedule. The project is also experiencing massive cost overruns, with doubled maintenance costs.

Okay, it’s behind schedule and costs more than we originally thought. Does the plane at least work like it’s supposed to? No. No, it doesn’t.

The F-35 is still not ready for full-scale production. A myriad of technical issues with the engine have been reported, and as recently as July 2022, most US F-35s were grounded because of problems with the ejection seats. An analyst at the Government Accountability Office (GAO) attributed the F-35’s failures to its complexity, saying, “They tried to make the F-35 do too much.”

Given these failures, the F-35 project is becoming impossible for important members of Congress to justify. The chair of the House Armed Services Committee (HASC), Representative Adam Smith, called the F-35 a “rathole.” Another member of HASC, Representative John Garamendi, had some scathing comments about the F-35 in a HASC subcommittee hearing in May:

For the contractors out there, what are you doing? Why can’t you give us a piece of equipment that actually works? You should never have a contract. And for Lockheed, you want a five-year maintenance contract? You can’t do what you’re doing today. Come on. What are we thinking?

We created a sustainment contract where we are not in charge, and Lockheed Martin has the maintenance contract. . . . It’s a cash cow for them for the future. Since we have a record that maintenance costs are doubled and a record that we can’t keep those planes flying, how can we look the taxpayers in the face and say “Well, that’s the way it is,” and shrug our shoulders?

Meanwhile, the Biden administration has asked for a 35 percent cut to the F-35 procurements for 2023 — on the reasoning that, down the line, Lockheed Martin will complete the Block 4 model of the fighter, and the government would rather spend the money later than modernize a fleet of already existing aircraft.

But we’re not done with the F-35 just yet. While HASC did not increase the number of F-35s the United States would buy in their new markup of the National Defense Authorization Act, the Senate Armed Services Committee added seven F-35s to the budget. For now, we are still spending massive amounts of public money on a plane that does not work, is nine years behind schedule, and that important figures in the government can’t justify.

From the looming recession to the criticism from top government officials, conditions surrounding the F-35 project resemble those that led to the demise of the F-22. For a preview of what’s likely to happen next, look at what occurred when the F-22 program was discontinued. With their steady stream of government checks in peril, Lockheed Martin scrambled. They used the specter of job losses as their primary means of lobbying for a new contract. How could Congress eliminate so many jobs created by the F-22 program and replace them with nothing? And so, their discontinued contract was summarily replaced.

The F-35 project may soon be on the chopping block, but Lockheed Martin won’t willingly disembark the gravy train. At some point, we as a nation have to ask ourselves: Does this uninterrupted string of massive weapons contracts even make sense? As Joe Biden contemplates declaring a state of emergency over the climate crisis, can we justify spending $1.7 trillion on a plane that uses 1,340 gallons of fuel per hour? Can we justify funneling our brightest minds in STEM into the war machine when we desperately need to invest in green energy? Can we justify pouring money into a military that causes harm all over the world when we desperately need international solidarity to solve our toughest problems?

A large majority of Lockheed Martin’s revenue comes directly from our tax dollars. If the fall of the F-35 program comes soon, we have to be ready to demand that one massive contract doesn’t get replaced with another. For the sake of the planet and the future, the F-35 program needs to be canceled, and we must prevent another wasteful endeavor from taking its place.