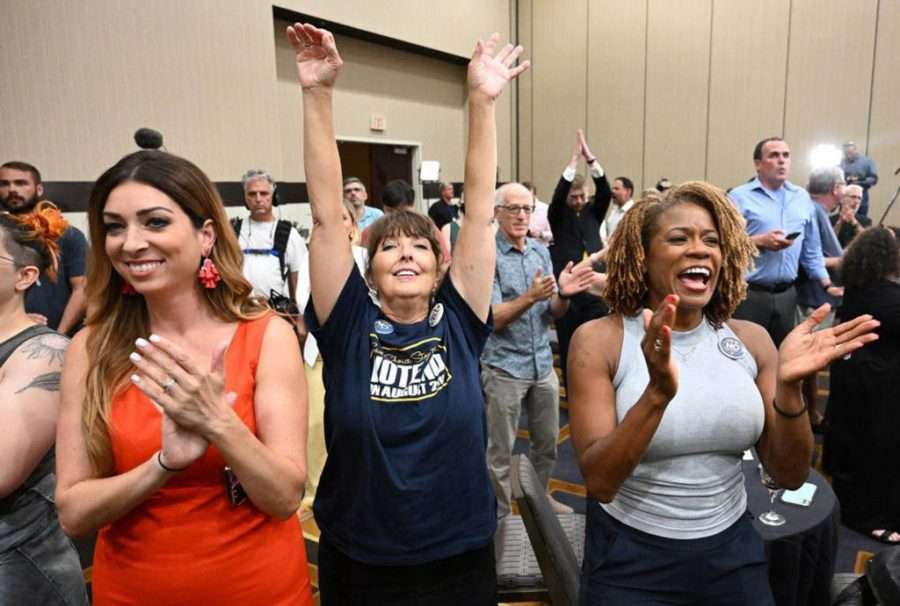 The resounding defeat of a ballot initiative to strip abortion rights from the Kansas state constitution is a reminder that we don’t need to rely on benevolent philosopher-kings in black robes to protect our rights. We can mobilize popular majorities.

Kansas residents applauded the Kansans for Constitutional Freedom in Overland Park, Kansas on August 2, 2022 for voting no on a constitutional amendment that would have removed the right to an abortion from the Kansas constitution. (Tammy Ljungblad / Kansas City Star / Tribune News Service via Getty Images)

Kansas is, to put it mildly, not a particularly liberal state. The last Democrat to carry it in a presidential election was Lyndon Johnson in 1964 — and he was also the first Democrat to win there since Franklin D. Roosevelt in 1936. In 2004, the state was used as a case study in the triumph of conservatism in Thomas Frank’s best-selling book What’s the Matter with Kansas?

But last week voters rejected a ballot measure to strip abortion rights from the state’s constitution with a vote of 58.97 percent — an even bigger percentage than Donald Trump won there in 2020 (56.21 percent). It’s a striking reminder that our choices aren’t limited to giving up on basic rights or hoping that benevolent philosopher-kings in black robes will protect them for us. We can mobilize democratic majorities.

Against the Civics-Class Conception of Rights

Individual rights don’t get much more fundamental than the right to control what goes on inside of your body. As moral philosopher Margaret Olivia Little points out in her classic paper “Abortion, Intimacy, and the Duty to Gestate,” even if we assume for the sake of argument that a literally mindless early-trimester fetus already counts a “person,” we’d still be talking about “a person whose blood is being oxygenated by another’s lungs, a person whose hormonal activity in turn affects that other’s brain and metabolism, a person whose growing size enlarges another’s physical boundaries.” Legally forcing a pregnant woman to maintain this state of “extraordinary physical enmeshment” against her will would still be a profound violation of her bodily autonomy.

How should fundamental rights be protected? According to the view widely taught in high school civics classes and prevalent in post–World War II liberal thinking, the best way to secure rights is to rely on democracy-limiting “checks and balances.” The rights of vulnerable groups are chiefly threatened, in this view, by the “tyranny of the majority” and the best defense is to empower unelected judges whose only loyalty is to the text of the Constitution.

This picture doesn’t survive contact with empirical reality. The court is often split along nakedly partisan lines in high-profile controversial cases. Republican lawyers are as good as Democratic lawyers at constructing legal arguments for whatever policy conclusions they want to reach. And unelected judges can and do use their power as legislators in robes to trample the rights of vulnerable groups. The Supreme Court spent much of its history doing things like striking down laws against child labor.

The fact that they don’t need to worry about reelection makes it more likely that they’ll take away rights that most of the electorate supports. Americans wanted Roe v. Wade to remain in place by a margin of 2 to 1. The Supreme Court ignored them in its Dobbs decision in June.

It’s just about possible that if Democrats win the next few presidential elections, and Republicans don’t succeed in doing to any future Supreme Court nominees what they did to Merrick Garland, and maybe lightning strikes a Federalist Society dinner or two with a complement of conservative Supreme Court justices in attendance, the end result could be a judicial reinstatement of Roe. But I wouldn’t recommend holding your breath while you wait for that to happen. Federal legislative action is a much less distant possibility, but so far Democrats seem more interested in grandstanding and fundraising than waging an all-out political battle to get it done.

Where does that leave the pro-choice movement? Reflecting on this question in an essay published by Sublation magazine a few days after Dobbs, my friend Djene Bajalan pointed to an international precedent. The right to abortion was established in Ireland in 2018, not by judicial interpretation but a popular referendum. Sixty-six percent of voters in the overwhelmingly Catholic nation voted to enshrine a woman’s right to choose in Ireland’s constitution.

A similar strategy might be pursued in America. While legalizing abortion at the national level through either legislative action or the courts may be a dead-end, within many states — including those that are in the process of outlawing abortion — there are mechanisms that allow for referendums that can compel legal changes. This presents an opportunity for a popular movement to take matters into its own hands and impose a democratic mandate for a woman’s right to choose.

There are even encouraging precedents for voters approving progressive ballot measures even in states that tend to elect conservative legislators. He gives the example of “GOP-dominated Missouri,” where voters approved Medicare expansion and medical marijuana while rejecting union-busting “right to work” laws. Why couldn’t a popular movement for abortion rights be equally effective?

Five weeks later, the vote in Kansas strikingly confirmed Bajalan’s analysis. The proposed “Value Them Both” amendment would have taken abortion rights out of the state constitution, giving the majority-Republican state legislature a free hand to imitate the extreme antiabortion laws passed in neighboring states. Outraged pro-choice Kansans, many of whom had never previously been involved in politics, “organized rallies, marched in parades, canvassed and phone-banked.” In the end, the amendment was defeated by a far wider margin than anyone expected — even in some very conservative rural counties.

It’s hard to know the extent to which this was a result of these organized efforts or simply a revelation of preexisting popular disgust at the prospect of sweeping abortion bans — which would be even more encouraging, since it would show that even in fairly red states future “a popular movement to take matters into its own hands” would be in a better starting point than we might otherwise assume.

In the run-up to the vote, Angie Hooper, the co-owner of a diner called the Roasted Café, displayed a six foot by four foot sign reading, “Women are Not Breeding Cattle.” That’s a popular enough sentiment throughout the country for the American people to be better defenders of abortion rights than an unelected panel of Ivy League graduates in black robes.