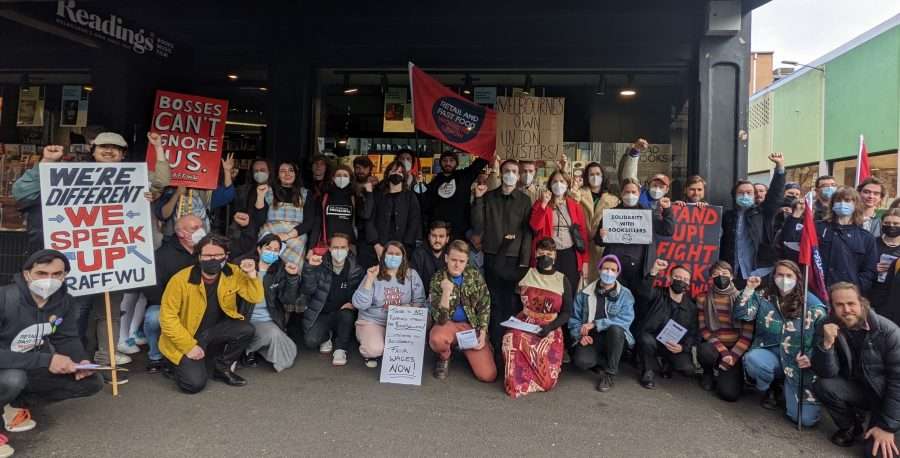 Bookstore workers in Australia are beginning to organize for better pay and conditions. They are already chalking up important wins in individual stores — but their aim is to transform conditions across the industry.

Workers gather in front of Readings bookstore in Melbourne to demand management respect the tentative agreement they negotiated. (RAFFWU / Twitter)

Despite the cultural capital and glamour many bookstores enjoy, it’s well documented that many of their workers face tough retail conditions. Indeed, working with books is often supposed to compensate for minimum wages and unsafe workplaces. Compounding this is the fact that union coverage at Australian bookstores has historically been very low.

Less than two years ago, no Australian bookstore was covered by a retail enterprise bargaining agreement (EBA). Today this is no longer the case. With support from the Retail and Fast Food Workers Union (RAFFWU), bookstore workers are standing their ground for better, safer conditions, most recently at Readings, in Carlton, Melbourne.

They have already notched up important wins. If bookstore workers across Australia replicate their efforts, it could transform conditions across the industry.

Throwing the Book at Management

As RAFFWU secretary Josh Cullinan explained to Jacobin, “in a practical sense, bookstore workers didn’t have a union to help them organize until RAFFWU.” Despite this, Cullinan argues that bookstore workers hold a great deal of potential industrial power:

They are well aware that their intellectual labor is being exploited for minimum wages. They are comparatively well read, many are authors themselves, and they often bring a strong sense of solidarity to their art, fellow artists, and colleagues.

In 2021, RAFFWU members at Better Read Than Dead proved this by standing up to heavy backlash from management over their push for an EBA. Their monthslong campaign included a rally, a working ban, and collecting signatures on an open letter of support from an impressive catalog of notable authors and allies. According to the union, it marked the first retail industrial action in Australia in fifty years — and it was a success. Better Read Than Dead workers won a historic EBA that RAFFWU has described as the “best enterprise agreement in retail and fast food” in Australia.

RAFFWU members at Readings in Melbourne have also been waging a fight for an EBA. Touted as community sweethearts by many, Readings began as one store in 1969, and slowly grew to a booming online business and chain of eight successful stores across the city. Most recently, Readings added a new shop at Melbourne’s Emporium, an upmarket CBD (central business district) shopping mall. The new shop is within five blocks of an existing Readings, and was opened shortly after management told workers that the business was trading at a loss and an EBA would be too costly. “We need to rebuild Readings, not put it at risk,” management told Readings workers. They have since expanded further with a multimillion-dollar managers’ office.

The push for an EBA at Readings comes after a decade of management attacks on wages and conditions. According to Chris Dite, a former long-term Readings worker, workers first contemplated unionizing in 2011. As he explained,

back then, the Productivity Commission had proposed severe wage cuts for retail workers, and Readings employees collectively petitioned management to reject the proposal, to no avail. Over the next ten years, Readings implemented a series of penalty rate cuts, each time driving more workers into the open arms of the union and created a growing thirst for collective action.

One Step Forward, Two Steps Back

After five years of campaigning and organizing, and some small improvements won through internal struggles, a majority of Readings workers finally sought to begin EBA negotiations in March 2021. Management refused and organized a “Why I shouldn’t support an EBA” countercampaign. They also challenged the union majority twice in two months, forcing two new ballots. Readings workers won both.

Given no other recourse, management has been sitting down with workers since February 2022 to negotiate an agreement. This hasn’t stopped management from making further attempts to break the union, including by harassing and intimidating union delegates.

Jack Rowland, who worked at Readings until recently and was a RAFFWU delegate during organizing and negotiations, spoke to Jacobin about his experiences:

I was repeatedly targeted by senior figures in the business, sometimes in deeply personal and hurtful ways. HR was aware of all of these instances, even witnessing one of them firsthand, but still the treatment continued. It’s hard not to see these incidents as directly linked to my union participation. They’re a large part of why I left a job that I loved.

Finally, in July this year, negotiations were coming to a close, and it looked as though the agreement would soon be finalized through the Fair Work Commission. Management and union members endorsed an in-principle agreement that included a number of wins. Among them were higher base rates and penalty rates, a 4.6 percent wage increase in 2022, reduced application of junior rates, improved paid parental and domestic violence leave, and a commitment to fairer and safer policies.

Then only a few weeks later, at the start of August, Readings management bailed. They refused to honor the 4.6 percent wage increase, reneging on the in-principle agreement and effectively issuing a two-year wage freeze. Given Australia’s current inflation rate and cost-of-living crisis, the result is a financially untenable situation for workers.

Inspired by the victory at Better Read Than Dead, Readings union members voted to take their dispute to the community, going public for the first time. The public campaign kicked off with a rally at the flagship Readings store in Carlton on Saturday, August 6. The date also marked the eleven-year anniversary of Readings workers’ first pushback against penalty rate cuts in 2011.

The response was immediately one of solidarity, with passersby wanting to know how else to support the workers. As one community supporter, Nonie May, commented, “Readings staff are a fundamental part of this community of readers. For the owner to treat staff with such disrespect, devaluing the work they do and walking back an agreed fair wage, is frankly shameful.”

Another supporter, Liz O’Connor, has decided to stop shopping at Readings to protest management’s decision. “Book retailers like Readings forget that people who buy books actually care about workers’ rights,” she noted. “They ignore workers’ rights at the peril of their business.”

Writers have also rallied behind Readings workers. Explaining his decision to attend the rally, local author Harry Saddler commented that “booksellers do so much work to support us, to get our books out there — so it’s important for authors to support booksellers in return. It’s a mutually sustaining relationship.”

With more public campaigning and industrial action being considered, RAFFWU hopes that management will come back to the table and honor the in-principle agreement.

“Members are determined to secure a satisfactory agreement,” Josh Cullinan said. “Our members are leading the way in showing what is possible when workers in retail get organized and fight back.”