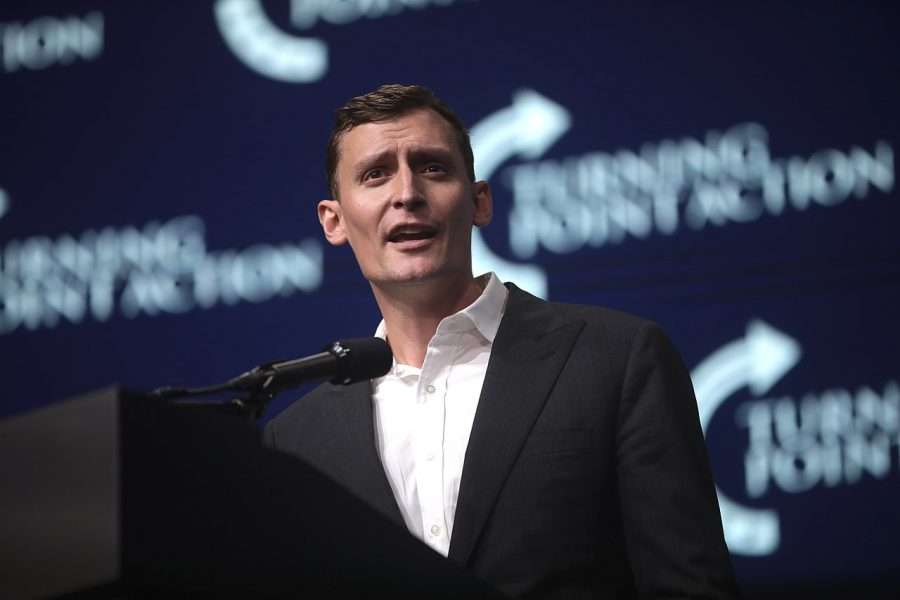 Blake Masters, the GOP’s nominee for Senate in Arizona, claims to care about the working class. Don’t believe a word of it.

When Blake Masters clinched the Republican nomination for Senate in Arizona last week, the result was widely described as a triumph for the “populist” wing of the American right. A typical write-up in the Washington Post described Masters as a representative of a “New Right” that stands for “economic populism, nationalism, and conservative social values.”

The parts about conservative social values and nationalism are accurate. Masters loves to demonize immigrant workers, he wants to overturn same-sex marriage equality, and he all but froths at the mouth when anyone says the word “China.” But is he really an economic populist?

He’s certainly gone out of his way to give that impression. He tweeted that McDonald’s automating jobs once done by humans is a “giant step backwards for our society.” He put out a campaign ad about how “you ought to be able to raise a family on one single income.” (In the ad, he blamed “globalization” for the fact that workers are no longer paid enough for this to be possible.) On his campaign website, he rails against the damage perpetrated by an “unholy alliance” of “Big Government, Big Tech and Big Business.”

But what does he actually want to do to reign in the power of big business? Perhaps raise taxes on wealthy business owners or make it easier for workers to organize unions? Does he have a plan to force McDonalds to not only rehire human cashiers but pay them enough money to raise a family on “one single income”?

Of course not. His “economic populism” is phantasmic.

“Populism” Brought to You by Peter Thiel

Masters worked for Silicon Valley billionaire Peter Thiel until this year. He was the chief operating officer of Thiel Capital and the head of the Thiel Foundation. Masters and Thiel also cowrote a book of business advice called Zero to One: Notes on Startups, or How to Build the Future.

Not so many years ago, Masters and Thiel both called themselves libertarians. Thiel has a history of being openly contemptuous of the very idea of democracy, precisely because it gives poor people the option of voting for redistributive economic policies. If Masters is really a populist who hates the unholy alliance of big government, Big Tech, and big business now, his road-to-Damascus moment must have been very recent. Did Thiel and Masters perhaps have a giant falling-out when Masters decided to run for Senate as an anti–big business candidate?

Not so much. In fact, Thiel has donated at least $15 million to Masters’s campaign so far. And Masters advertises their relationship in the second and third paragraphs of the “About Blake” section of his campaign website. Quite apart from the fact that Thiel’s career — which included years of lobbying for government contracts for his surveillance firm, Palantir, and service on Donald Trump’s transition team — embodies the “unholy alliance” that Masters claims to oppose, you would think that if Masters’s “populism” was remotely serious, Thiel wouldn’t want to donate. Thiel is a guy who cares enough about protecting his hoarded wealth from taxation that he essentially bought himself dual citizenship in New Zealand. Would he really spend $15 million on a candidate he thought would stick up for the interests of working-class people unable to raise a family on a single income, perhaps by raising taxes on the wealthy to pay for generous financial support for working-class parents?

He would not. Though Masters occasionally makes economic populist noises, it’s window dressing for a rock-solid commitment to conventional right-wing economics, married to cruel social policies designed to appeal to the conservative side of the culture war. If anything was going to give Thiel pause about backing Masters, it would presumably be the second half of that equation, given that, at this point, Masters is officially committed to ending marriage equality and thus dissolving Thiel’s own marriage to Matt Danzeisen.

Masters isn’t wrong to say that a decent society would give people the option of having one parent stay home with the kids, if that’s what everyone involved genuinely wants. (I’d add that it would also provide free childcare for those couples where both partners want to work full-time.) But how exactly does he propose to accomplish this goal? Does he want to rebuild the labor movement or dramatically raise the minimum wage? Of course not. Talking about the problem is a cheap way of signaling concern for the welfare of the working class without having to attach it to a specific policy proposal.

When Masters does talk about specific economic policies, he sounds about as populist as Mitt Romney. He wants to privatize Social Security. He’s savvy enough, though, to get that dressing up bog-standard Republican policy preferences with a little bit of performative disdain for big business and a lot of culture-war pandering helps the medicine go down.

“We should be the party of low taxes,” Masters said in one particularly lucid moment at a campaign stop to talk to elderly Republicans at a library west of Phoenix. “But if that’s all we are, if that’s all that Republicans bring to the table, we’ll be crushed.”

As a strategy, it makes perfect sense. You can best advance an agenda of Reaganite economics, authoritarian nationalism, and conservative social values by putting the least emphasis on the first of those three points, and even by dressing it up as its opposite. But there’s no reason any of the rest of us need to play along.