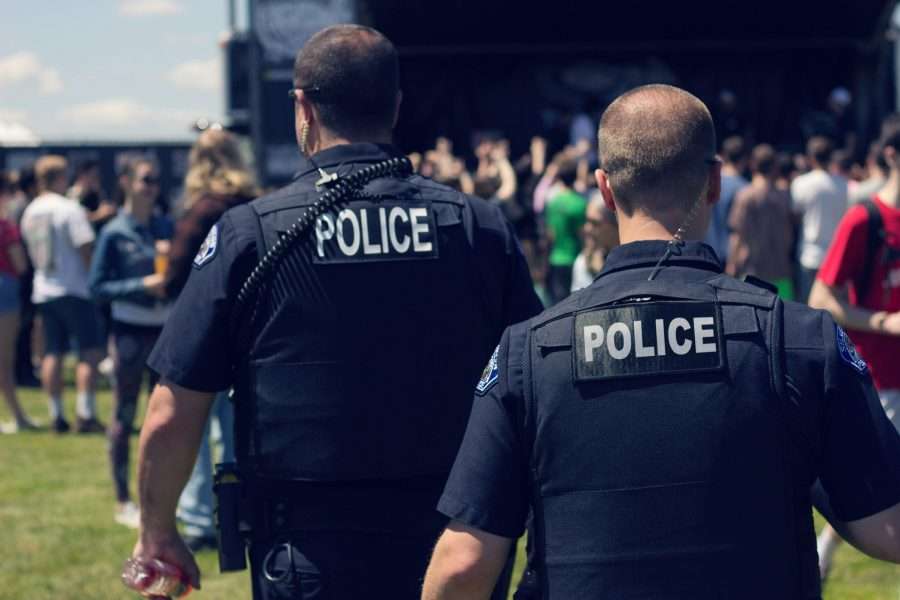 Democrats’ midterm strategy is to endorse both law enforcement funding and abortion rights. But there’s a problem: where abortion bans exist, police are now tasked with enforcing them.

The Democratic Party is positioning itself as an ally of law enforcement, inviting an inconsistency with its pro-choice stance. (Kage Nesbitt / EyeEm via Getty Images)

“To me, it’s simple,” President Joe Biden told attendees of the National Organization of Black Law Enforcement Executives at their annual conference. “If you can’t support banning weapons of war on American streets, you’re not on the side of police.” Biden also said of the January 6 attack on the Capitol, “You can’t be pro-insurrection and pro-cop.”

Biden’s comments, clearly meant to position his administration and the Democratic Party as allies to law enforcement, were part of a larger midterm strategy by party leadership to defend frontline Democrats from Republicans’ charges of anti-police sentiment.

The strategy hit a snag last month as progressive house members were able to delay a vote on a broadly popular assault weapons ban bill that included significant federal money for local law enforcement without any oversight or police reform measures. Progressives’ pushback has not prompted any self-reflection from party leaders who, concerned about Wille Horton–style campaign attacks in the fall, view supporting more funding for law enforcement as a repudiation of the “defund the police” rhetoric they believe is toxic to their electoral chances.

But moderate Democrats’ support for extra police funding presents a glaring contradiction with their other big midterm strategy, which is to emphasize their support of legal abortion in the wake of the Roe v. Wade repeal. Following the success of conservative efforts to ban abortion, it became immediately clear to many onlookers that digital surveillance will play a crucial role in the efforts to find and punish women seeking now-illegal abortions. In states where abortions are made illegal, some of the policing tools that Democrats want to fund will no doubt be used to track and prosecute women.

In a context where women’s reproductive choices are criminalized, all of this raises the question: Can you be both pro-choice and pro-cop? Democrats are about to find out.

In seeking to provide local law enforcement with more money for tools and equipment without oversight, Democrats are contributing to a disturbing trend of police using technology to spy on citizens without transparency or accountability. Democrats stress that extra funding will go to equipment that will aid police reform like body cameras and “less-than-lethal” weapons like tasers — the evidence for the effectiveness of which is mixed at best. But they don’t usually mention the billions that federal and local law enforcement spends on mass surveillance.

In fact, nobody in American politics talks much about it. Purchases of devices like the Stingray, which can be used to spoof cell towers and indiscriminately listen to phone calls, are often hidden from public scrutiny by police departments. It would surprise many Americans to know that companies like Israel’s NSO Group provide spyware to police departments to hack personal devices. While police and their vendors maintain that these devices and software are used for legitimate law enforcement activities, they are often deployed against journalists, activists, and even local politicians.

The funding for the police surveillance state comes from several different sources. Civil asset forfeiture is a popular method of funding spying efforts as the money seized by police can often be used without any civilian oversight, such was the case in Boston where police hid multiple purchases of cell spoofing devices from their budgets. Police also receive funding from private donations as well as discounts from surveillance companies looking to secure lucrative contracts with law enforcement agencies. Increasingly, police can leverage technology to spy on citizens at little to no cost to their departments by pressuring tech companies to turn over the massive troves of data they collect from their users.

A prominent source of funding for police surveillance is the federal Justice Assistance Grant program (JAG) run by the Bureau of Justice Assistance. The JAG program funds many different law enforcement initiatives, including research into forensic science as well the opioid epidemic. Departments and agencies can request grant funds for vaguely defined “activities to prevent and control crime based on their own state and local needs and conditions.” Those funds increasingly go to digital surveillance.

It’s practically impossible to provide a full accounting of police use of spying technology or the extent to which they use data provided by popular products and services like internet-connected doorbell cameras and social media platforms to snoop on civilians. The effects of this surveillance state can be as benign as wiretaps approved by legal warrants — but they also have the potential to be dystopian in their application, as when a predictive policing program in Chicago flagged an innocent man as a person of interest for a crime yet to happen.

Police in antiabortion states can easily leverage the surveillance state to harass and prosecute women seeking abortions, and we should assume that they will. The infrastructure is already in place.

For more than a decade, retail companies have collected data on customers to predict what they will want to buy. Pregnant women were among their earliest targets, and today an investigation by Gizmodo found thirty-two data brokers offering data sets identifying people who may be pregnant. If this data is for sale, then the police can purchase it.

As some states move to criminalize crossing state lines for an abortion, police can make use of CCTV cameras and license plate readers as well as smartphone GPS data to track pregnant women. They can also use spyware purchased from NSO Group to target doctors and activists. These scenarios may seem far-fetched to Democratic lawmakers looking to score points with law-and-order voters, but the financially well-off are not the usual targets of police surveillance. Poor and marginalized communities are, and they know firsthand that this isn’t the stuff of sci-fi: it’s real life.

Police using technology and techniques of dubious legal standing to target and punish women would not be a shocking and aberrant use of law enforcement resources; it would just be standard operating procedure. In a post-Roe America, poor pregnant women may become just the latest subgroup designated for state control via policing.

Police do not entirely rely on assistance from the federal government to finance their surveillance efforts, but the JAG program and other federal law enforcement assistance programs — like the controversial 1033 LESO program which funnels military-grade equipment to local police departments — represent a sizable chunk of the pie. These are the programs that Democrats are pushing to fund, even as they claim to stand for the rights of women to make their own reproductive choices.

Moderate Democrats are simultaneously defending women’s personal freedoms and seeking to funnel money into the apparatuses poised to violate it. It appears they have a contradiction on their hands.

Throughout their political careers, Joe Biden and other moderate Democrats in positions of party leadership have been preoccupied with the enforcement of laws, usually at the expense of interrogating whether those laws actually keep people safe. The party has been living in the shadow of the 1970s and ’80s, when reactionary and racially coded accusations of being soft on crime were perceived as harming the viability of Democratic candidates.

To combat this impression, few took as strident a pro-crime stance as Biden himself when he architected the hyper-punitive 1994 Crime Bill, fueling mass incarceration. Clinton-era tough-on-crime legislation was chiefly a matter of political expediency, but it also sprang from moderate Democrats’ genuine belief that draconian laws on drugs and immigration were the only way to address social ills. Theirs was a total capitulation to reactionary rhetoric on crime, and even as the nation has witnessed mass uprisings against the abuses of police, this crop of leaders has been loath to change their perspective.

The overturn of Roe and the subsequent moves by states to ban abortion reveal tragic flaw in the Democrats’ reasoning. It’s easy for them to justify funneling billions of dollars into an oppressive police state when the targets of law enforcement can be categorized as violent drug dealers, illegal immigrants, and potential terrorists. It’s less easy when police are sent after women seeking abortions.

In recent years we’ve seen some encouraging pushback on the marriage of big tech surveillance and law enforcement. This summer, data privacy researchers testified before Congress, urging them to ban companies like NSO Group from operating in the United States. San Diego recently joined Oakland and Seattle in passing ordinances restricting the unilateral use of police surveillance. As for the police funding bill in the House, progressives were able to secure enough no votes to delay the vote and force police reforms into the package.

In 1977, the Hyde Amendment was passed as part of a Medicare appropriations bill and banned federal funding for abortions. If Democrats are so keen to spit the difference on police spending, then perhaps a similar stipulation barring federal assistance to police from being used to prosecute women and doctors for seeking or providing abortions services is warranted. Digital surveillance would still be used to target and harass poor people of color, but this carve-out would be a start — or, at the very least, would be ideologically consistent with Democrats’ stance on abortion.

Until Democratic leadership shows a willingness to understand the real-world impacts of their tough-on-crime electoral posturing, it’s hard to take their rhetoric on protecting women’s rights and safety seriously. It didn’t take long for stories of the horrific treatment of women and the curtailing of basic rights to emerge post-Roe. If and when when things get worse, moderate Democrats are going to have to pick a side.