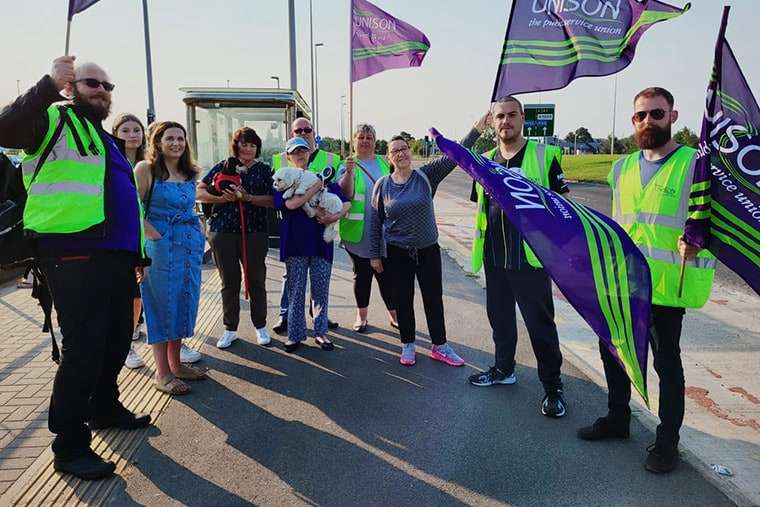 Low paid health workers in Lancashire were back on picket lines this week in a long-running fight over pay and conditions.

The porters, cleaners and caterers, who are members of the Unison union, are angry the company is refusing to engage with their demands. OCS has just been bought out by aggressive US hedge fund Clayton, Dubilier and Rice (CDR), the new owners of Morrisons supermarkets.

US courts recently ordered CDR to pay out more than £82 million in compensation after a botched takeover of a building materials firm.

Last year, CDR had a turnover of £6.3 billion. Meanwhile, OCS workers in Blackpool barely scrape by on the minimum wage, or much less if they are off sick.

Unison branch secretary Lee Morgan told Socialist Worker that the company is refusing to talk to the union. “OCS managers won’t come to the negotiating table,” he said. “They refuse to recognise unions.”

And, Lee says the firm is using intimidation tactics in a bid to frighten strikers. “We have one striker who is facing a disciplinary threat simply for giving an interview to the local radio. That’s how bad it is.”

OCS bosses have been trying to break the strike by bussing in managers and staff from as far away as Milton Keynes and Hull on strike days. “That must have cost them an absolute fortune,” says Lee.

Joanne, who has worked as a cleaner at The Harbour mental health hospital for two years, said, “We feel like we’re not part of the team. “We don’t get anything extra for bank holidays and weekends—but the main issue is the sick pay. It’s an insult. We’re forced to come into work poorly, because we get so little sick pay.”

The union is now applying maximum pressure on the NHS trust as OCS’s contract with the hospitals is shortly up for renewal.

Being on the picket line will help that process.

New strikes launched at St Monica are homes  in Bristol

Furious care workers at the St Monica Trust, in the south west of England, were set to return to picket lines this week as part of their fight against “fire and rehire”.

Care home staff at the Russets and Sherwood, in Winscombe, planned to walk out for 48 hours from this Tuesday morning.

Staff at Garden House in Bristol were expected to follow on Friday.

Unison union members at St Monica Trust charity are furious after bosses demanded sweeping changes to their pay and conditions.

Some workers stand to lose thousands of pounds a year from cuts to ­enhancements for working unsocial hours.

Paid sick leave is to be halved, handover times reduced and catering and cleaning roles merged. Bosses have insisted they will fire staff who refuse the changes.

Strikers are furious at St Monica’s use of agency staff. They are paid £16.81 an hour, some £7 more than permanent workers doing the same jobs.

If St Monica’s bosses succeed in slashing these workers’ pay, they will feel able to launch fire and rehire attacks on other staff. There is also a danger that other care providers could follow.

Email messages of solidarity to bristol.unison@bristolunison.co.uk