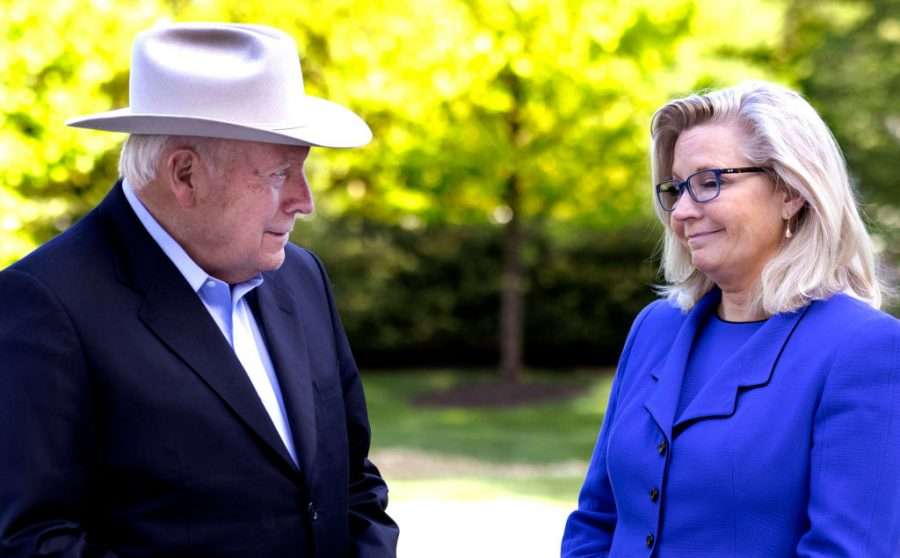 In an ad for his daughter Liz Cheney, Dick Cheney denounced Trump as a “threat to our republic.” Dick seems to have forgotten that, unlike Trump, he and George W. Bush successfully stole an election.

Congresswoman Liz Cheney with her father, former vice president Dick Cheney, at his house in Virginia, May 12, 2021. (David Hume Kennerly / Center for Creative Photography / University of Arizona via Getty Images)

“In our nation’s 246-year history,” Dick Cheney says at the beginning of a viral ad for his daughter Liz Cheney, the Wyoming congresswoman, “there has never been an individual who has been a greater threat to our republic than Donald Trump.”

That’s a remarkable claim, and not just because the United States once had to fight a war to suppress an actual insurrection led by antidemocratic ideologues. Compare the 360,000 Union soldiers who died suppressing the Southern rebellion to the zero Capitol police officers who were directly killed by pro-Trump rioters on January 6, 2021.

And we don’t need to go back to the Civil War to see the absurdity of Cheney’s claim. Just in the last few decades, you know who was a much more competent and dangerous enemy of democracy than Donald Trump? Dick Cheney.

Trump “tried to steal the last election,” Cheney reminds us as the ad goes on, “using lies and violence to keep himself in power after the voters rejected him. He’s a coward. A real man wouldn’t lie to his supporters. He lost his election and he lost big.”

This focus on January 6, and more generally on Trump’s attempts to overturn the election, makes sense. As the vice chair of the House January 6 Committee, Liz Cheney has positioned herself as a leading member of the small and increasingly irrelevant faction of the GOP that continues to be openly critical of the former president. It looks quite likely that she’s about to lose to a Trump-endorsed primary challenger (Harriet Hagerman).

But it takes a pretty breathtaking amount of chutzpah for Dick Cheney of all people to attack anyone else for trying to steal an election. Cheney became vice president (and, at least in the early years of the Bush administration, something like the de facto copresident) when he and George. W. Bush successfully stole the 2000 election.

Set aside the fact that half a million more Americans voted for the Democratic ticket of Al Gore and Joe Lieberman than for George Bush and Dick Cheney. In an actually democratic system, that would be the only number that mattered.

Given the strange and anachronistic Electoral College system used in our presidential elections, Bush and Cheney could steal the national election by stealing Florida’s electoral votes—which is exactly what they did.

Many tens of thousands of registered voters were purged from Florida’s voter rolls before the election in a deeply flawed process overseen by Republican secretary of state Katherine Harris. Florida’s deeply undemocratic laws barred felons from voting, and some of those purged really had committed felonies, but a great many had not. The low-end estimates about how many voters were illegally purged is about twice the number of votes by which Bush and Cheney allegedly won the state. High-end estimates put the number “11 or 20 times” higher than that.

Despite this, Florida’s remaining voters likely would have still handed Gore and Lieberman the state’s electoral votes, if not for a highly irregular vote-counting process in which Bush and Cheney were declared the winners by a Supreme Court decision, split on nakedly partisan lines, that stopped a recount.

Oh, and just like Trump’s failed attempt to overturn the 2020 election, Bush and Cheney’s successful electoral manipulation twenty years ago involved riots designed to shut down key points in the process. The January 6 riot briefly delayed the certification vote in the Senate. By contrast, the 2000 “Brooks Brothers riot” in Florida actually shut down the recount with the goal of giving more time to the Bush-Cheney team’s legal machinations.

The two riots were different in important ways. On the one hand, the ways the culture war has changed in the last couple of decades led to the spectacle on January 6 being more luridly violent and strange than what happened in 2000. It would be hard to imagine any of the Republican congressional staffers who went to riot at the recount site in 2000 dressing up like “QAnon Shaman” Jake Angeli. On the other hand, the Brooks Brothers riot was one step in a carefully orchestrated and ultimately successful plan to overturn the will of the voters. On January 6, by contrast, there was no real plan—it was the last gasp of a flailing and incompetent attempt by a president increasingly shorn of allies to find someone, anyone, to overturn the result for him.

But the two riots had one striking detail in common: Roger Stone played key role in organizing both of them.

Threats to “Our Republic”

In the first few years of the Bush-Cheney administration, in which Dick Cheney seems to have exercised an unprecedented amount of power as vice president, core civil liberties like the right to privacy and the right to trial by jury were rolled back in disturbing ways. Vast numbers of people were detained as “enemy combatants” outside of the legal protections normally allowed to prisoners of war or criminal defendants. Surveillance was conducted on a massive scale, both inside and outside the new workarounds to standard constitutional protections created by the Orwellian Patriot Act the Bush-Cheney administration rammed through Congress in the immediate aftermath of the 9/11 terrorist attacks.

Donald Trump was certainly no friend of democratic rights or civil liberties, but his big legislative accomplishment was a tax cut. He didn’t find any lasting new ways to undermine the standard freedoms associated with “our republic” remotely comparable to the handiwork of Dick Cheney and George W. Bush.

Trump is an enemy of democracy. He’s the current leader of a party that’s been actively trying to make it harder to vote for decades, and which has increasingly relied on the branch of government the most independent of democratic pressures (the judiciary) to enact its regressive agenda. However incompetent his attempt to steal the 2020 election may have been, there’s every reason to think that he (or perhaps Ron DeSantis) would try the same thing in 2024 or 2028 given half a chance. And as the example of 2000 shows, such attempts don’t always fail.

But if there’s one person we don’t need delivering pious little lectures about protecting our republic from the enemies of democracy, it’s one of the most competent and dangerous of those enemies in recent history. Or to put the point more succinctly: Shut up, Dick.