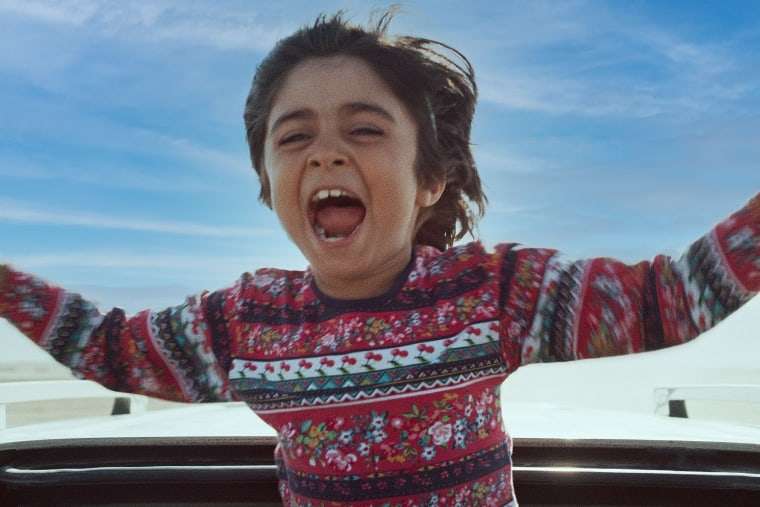 Hit the Road is the debut feature from Panah Panahi. He is the son of the revered, Iranian film director Jafar Panah—cruelly jailed by the Tehran regime last month.

The film charts the voyage of a family of four and their seriously ill dog as they drift towards the heart breaking departure of the elder of two sons (Amin Simiar). Due to circumstances that remain unclear throughout the film, the unnamed Big Brother is compelled to leave Iran.

We, the film’s audience, are largely in the dark, much like the younger son, who is being shielded from unsettling realities by his loving mother (Pantea Panahiha) and his grumpy but endearing father (Hassan Madjooni).

All four of the movie’s central performances are superb. However, six year old Rayan Sarlack (Little Brother) all but steals the show. A charismatic menace, he clowns around with an unrestrained curiosity that is both charming and hilarious.

Panahi’s film is deeply humanistic and layered with subtle political connotations. It has a grand sense of perspective that ensures we feel the heartbeat of this resilient family’s physical and emotional journey.

Iran: A Cinema Born Out of Poetry and Resistance
Read More

In one particularly glorious moment, the camera ascends from the ground at night. The Earth-bound scene transforms gradually until it becomes the beautiful image of the lounging father and his little boy hovering gracefully among the stars.

This memorable, imaginative scene is one of a number in which Panahi changes gear. He creates a reflective departure from the farce and tension that characterise the family’s road trip.

Panahi’s film reminds us that joy and sorrow are two sides of the same coin. An extremely funny, deeply moving story of love and loss, Hit the Road is an all too timely reminder of the brilliance and bravery of Iranian independent cinema. A truly remarkable debut, it is a road trip well worth taking.